Error Machine Podcast 122 – This Is Halloween

I love candy corn, and I don’t give a crap what you or my co-host say. It’s great. It’s delicious. And you can shut up if you disagree. The trademark Halloween candy is one of the few things that get me excited for the Fall season. It’s basically candy corn and the itch I get to replay Castlevania: Symphony of the Night. Which I did.

After we get through talking about our games of the week, we stray from our usual outline and just talk about all things Halloween. Our favorite games to play around this time of year. The movies we like to watch, the television shows, etc.

Speaking of Halloween movies, I’m just going to come right out with it: The Nightmare Before Christmas is the single most overrated movie of all time. Yeah, I said it. From a technical and animation perspective, it’s incredible, but in terms of being an enjoyable movie that doesn’t put me to sleep at just the thought of watching it, it fails miserably.

You want a Halloween movie? Watch The Monster Squad. If you’ve never heard of it, oh boy, let me tell you what you’re missing. The Monster Squad is the number one reason why I became such a huge fan of the Castlevania series. It’s a movie about a group of ‘tweens (and one teenager named E.J. who plays the tough kid. You know he’s the tough kid because he wear a leather jacket and smokes) who have a monster club. When the main character’s mother buys Van Helsing’s diary at a garage sale, Dracula comes looking for him, and he brings the whole crew of monsters along to help him. 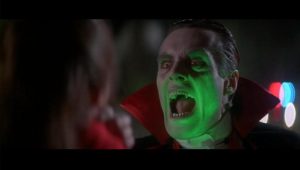 It’s 80s cheese at its finest, complete with an amazing montage of teenage kids making weapons in school. But if you do decide to watch it, be prepared for the most terrifying Wolfman you’ve ever seen, and probably the best portrayal of Dracula ever. That’s not a joke, either. The guy who plays Dracula does such a masterful job that he’s the one I immediately think of when I think about the character.

The Monster Squad made me fall in love with those monsters, and then I played Castlevania and saw that it featured all the same characters and I’ve been a Castlevania fanboy ever since. In all seriousness, if you haven’t seen The Monster Squad, you owe it to yourself. That, and Ernest Scared Stupid.

Don’t forget to subscribe to the podcast at any of the links below so you don’t miss out on any future episodes.