Harness Your Computer to Fight Disease

Giving to charity is a fantastic feeling, a feeling that I would argue is only eclipsed by participating in or forming a campaign yourself. Regardless of the disease: Cancer, Alzheimer’s, Huntington’s, Osteogensis imperfecta, HIV, as well as others; participating in a campaign such as Extra Life is a considerably noble cause. I myself have participated in Extra Life several times, as the ethos of ‘Play Games, Heal Kids’ struck a chord with me the first time I heard of the gaming marathon. Participating in the Humble Bundle Partner Program also made sense to me, as it allows me to divert 5-10% of the purchase of games  and other software (through the use of my referral link) to my charity of choice: Macmillan Cancer Support.

But giving to charity is by no means something new, in fact it is a practice that has been popular for thousands of years.

2500 BCE – Ancient Hebrews used a mandatory tax, known as a ‘tithe’. Whilst the semantics of whether these tithes were distributed fairly can be debated, every third and sixth year of the Shemittah cycle (seven-year agricultural cycle mandated by the Torah) included a poor tithe; which was given to strangers, orphans, and widows.

500 BCE – The word ‘philanthropy’ first appears in the drama Prometheus Bound by Aeschylus, derived from Phil (love) and Anthro (man), the term means ‘love of humanity’.

387 BCE – The Academy, often referred to as the Platonic Academy or Plato’s Academy was established. Regardless of the intent, it was effectively a group of volunteers working for the public good.

28 BCE – The first Emperor of the Roman Empire, Augustus, gave public aid to an estimated 200,000 people; despite being one of the most controversial leaders in human history.

1601 CE – The Charitable Uses Act of 1601 is enacted by Parliament. It identifies what purposes can be defined as charitable.

1643 CE – The first American fundraising drive is organised by Harvard University to build up its new college. For over a decade, Harvard’s entire teaching staff were supported via voluntary donations known as the ‘college corne’. 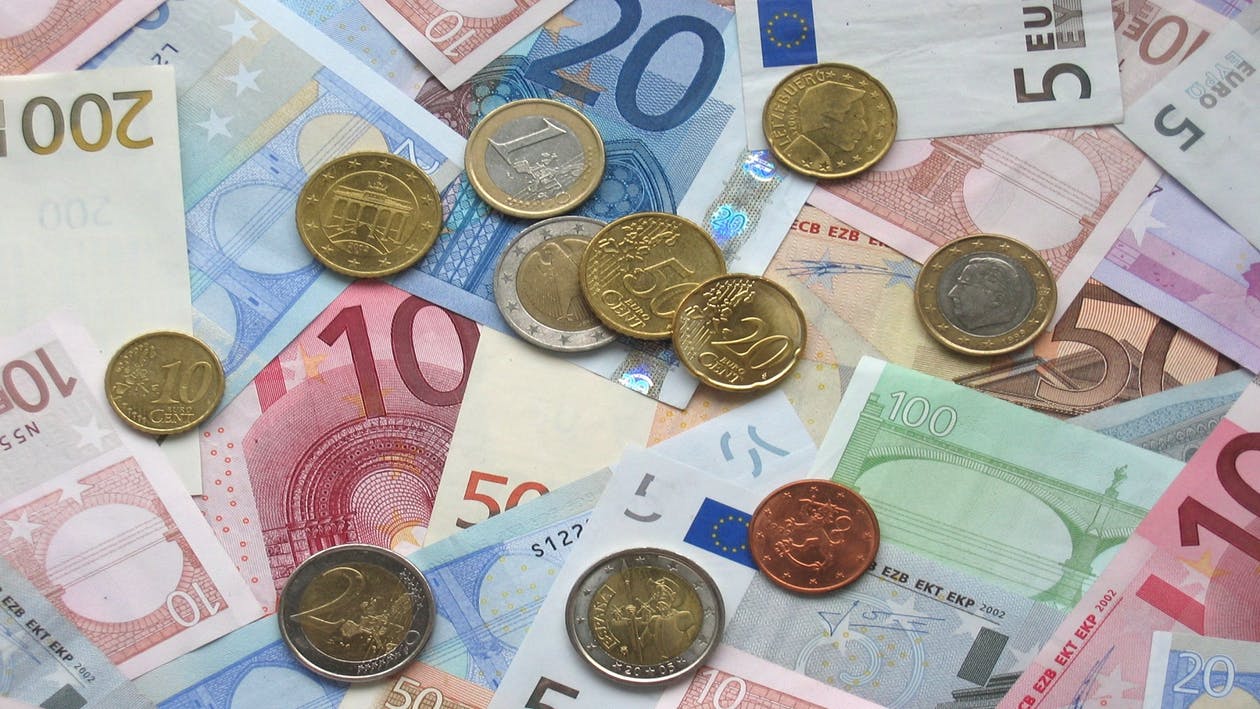 Whilst I appreciate the critical thinking that these scholars applied in their critiques of charitable giving, and many contend that simply transferring gifts or money to disadvantaged people has negative long-term effects, I hardly agree with the (in my opinion) cynical view of charities serving as a means for givers to conceal suffering that is unpleasant to see. But I will acquiesce that there is one major problem with charity, at least in my mind, and that of course is money.

It is no secret that trust in charities is at an all-time low. Whether it is the Oxfam abuse scandal, or PayPal diverting funds to other charities without telling donors, there is no guarantee that the money donated is being used as we intended. Regardless of where the funds go, even the transaction itself can be troublesome for many. Many content creators feel awkward asking for money in the first place, and likewise, if a person is not in a position to contribute financially, they can be left feeling considerably guilty about not being able to help.

At Scholarly Gamers, we have found ourselves being approached by several great causes and charity campaigns, which of course we are honored and humbled by; but it puts us in a difficult situation, how can we endorse (as an organisation) one particular fundraising campaign over another? Promoting the campaign of a community member (such as one of our streamers) is not a problem, as we are merely raising the awareness for their cause. But if we decided to promote one particular external campaign, then would we not have to promote all of them that had approached us? How do we objectively decide which cause is worthy enough for us to ask our readers to donate money to?

As an organisation, especially one that strives for objective and critical thinking, it certainly creates some problems.

But what if there was a way to make a meaningful impact in the war against diseases such as Cancer, but rather than requiring you to open your wallet, it took advantage of your #Battlestation when you are not using it? 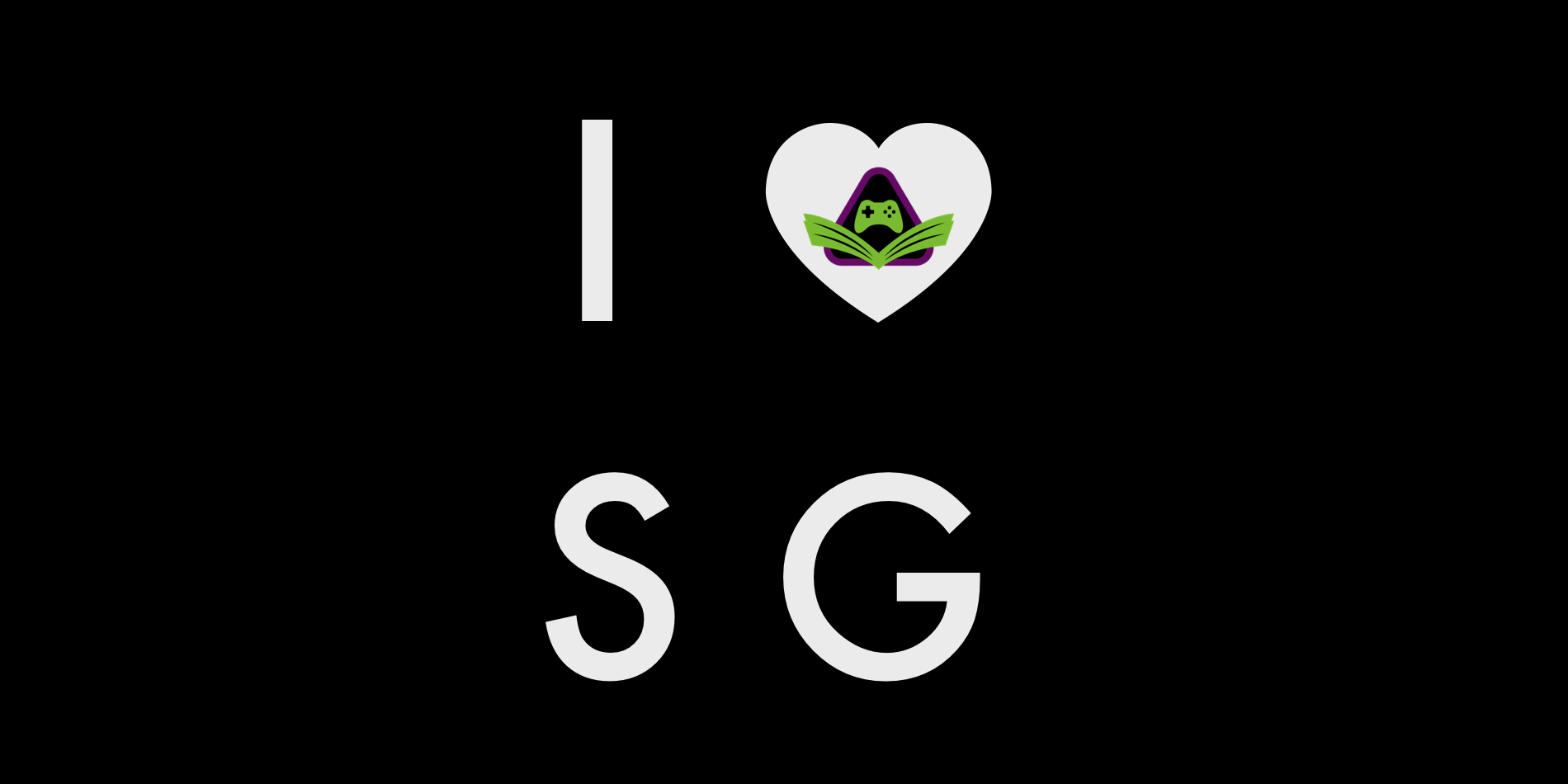 Distributed computing is based on the idea of harnessing the unused CPU (and now GPU) cycles of a computer. Supercomputers (such as the Cray-2 mentioned here) are expensive and take up considerable space, something that the Pande Lab (part of the Departments of Chemistry and of Structural Biology at Stanford University and Stanford Medical Center) was cognisant of when wanting to simulate how proteins/RNA/nanoscale synthetic polymers fold. A typical supercomputer can cost between $100 to $250 million USD to design and assemble, as well as around $7 million USD in annual energy costs; never mind the maintenance costs on top of that.

To put it simply, distributed computing (or decentralised computing) is where complex computing tasks are chopped up into small pieces and sent out to thousands or more personal computers or servers to process and return. Once all the pieces are processed, the facilitating service puts them all together and the job is complete.

The project that truly popularised distributed computing and showed that it could work was SETI@Home, an effort by the Search for Extraterrestrial Intelligence (SETI) at the University of California at Berkeley. The project was started in May 1999 to analyze the radio signals that were being collected by the Arecibo Radio Telescope in Puerto Rico. Whilst the project has still not found extraterrestrial intelligence, it has proved to the scientific community that distributed computing projects are a viable analysis tool, and can even beat the largest supercomputers. 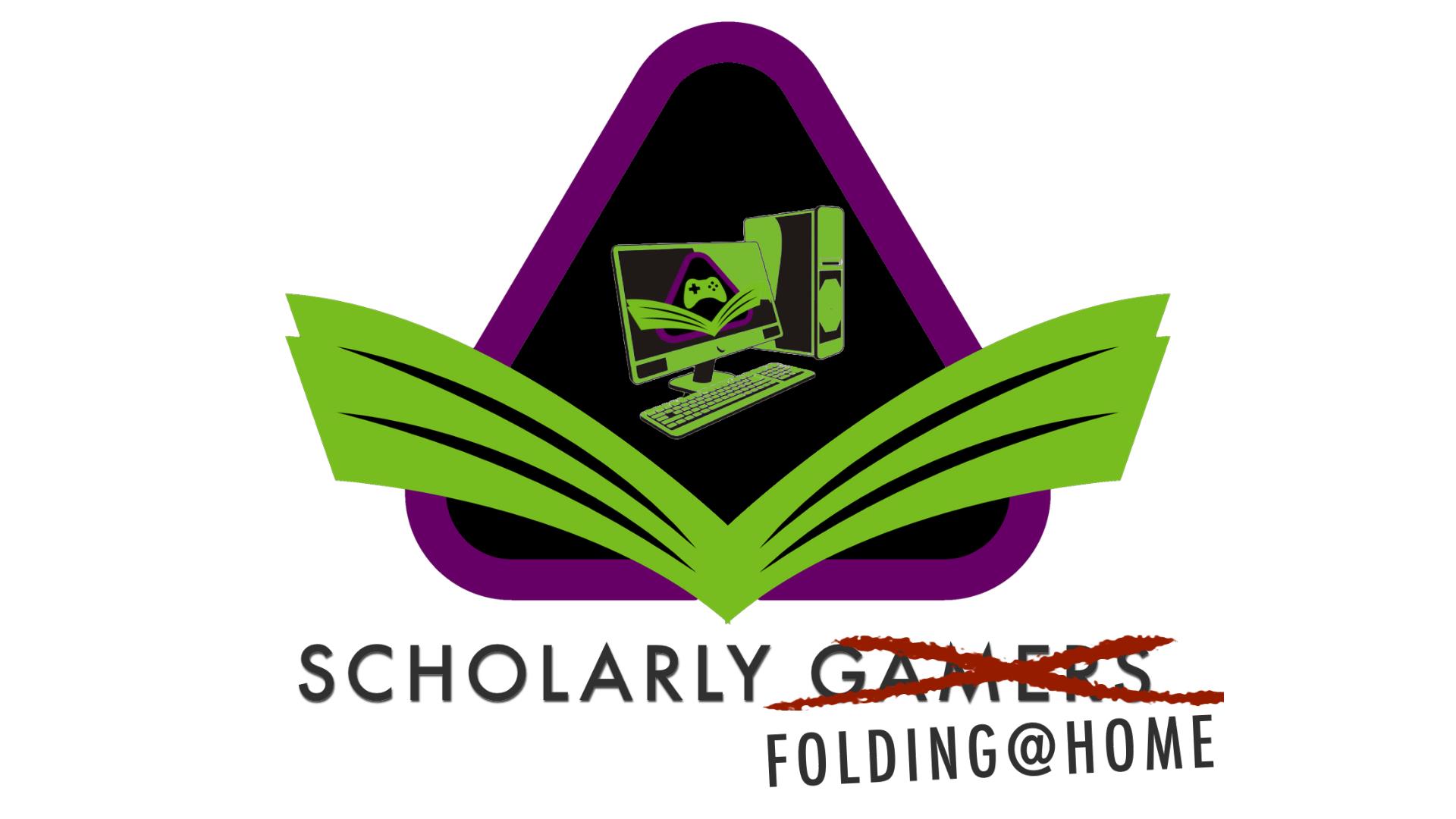 Folding@home is a distributed computing project for disease research that simulates protein folding, computational drug design, and other types of molecular dynamics. F@h is one of the world’s fastest (distributed) computing systems, with a speed of approximately 135 petaFLOPS. That is 135,000,000,000,000,000 floating point operations per second, which even eclipses China’s Sunway TaihuLight (the fastest supercomputer in the world) performance of 93 petaFLOPS. Thanks to the hundreds of thousands participants around the world, researchers have been able to run computationally costly atomic-level simulations of protein folding thousands of times longer than ever previously achieved; resulting in 155 (as of writing) peer-reviewed results published over the last 18 years, which would not have been possible without the concept of distributed computing.

Whether you understand how cryptocurrency mining works or not, the chances are you have heard of the term, and have very likely experienced the negative impact it has had on computer hardware prices; especially the climbing cost of graphics cards in recent years. Nowadays it is considerably difficult to mine cryptocurrency, or rather it requires a significant initial investment in hardware to even stand a chance of recouping that investment within the first year. It also requires purpose-built systems that require several (as in a dozen or more) video cards, so not exactly something that the typical PC Gamer can get into.

Folding@home however can run on the most modest of systems, but it can also take considerable advantage of your gaming/streaming rig in order to help find cures for diseases such as Cancer, ALS, Parkinson’s, Huntington’s, and even Influenza; either in the background when you do not require the full power of your PC or only when your PC is idle and not being used (during the night for example). You can even run Folding@home within a Chrome Browser without having to download any software at all. The choice is completely up to you. 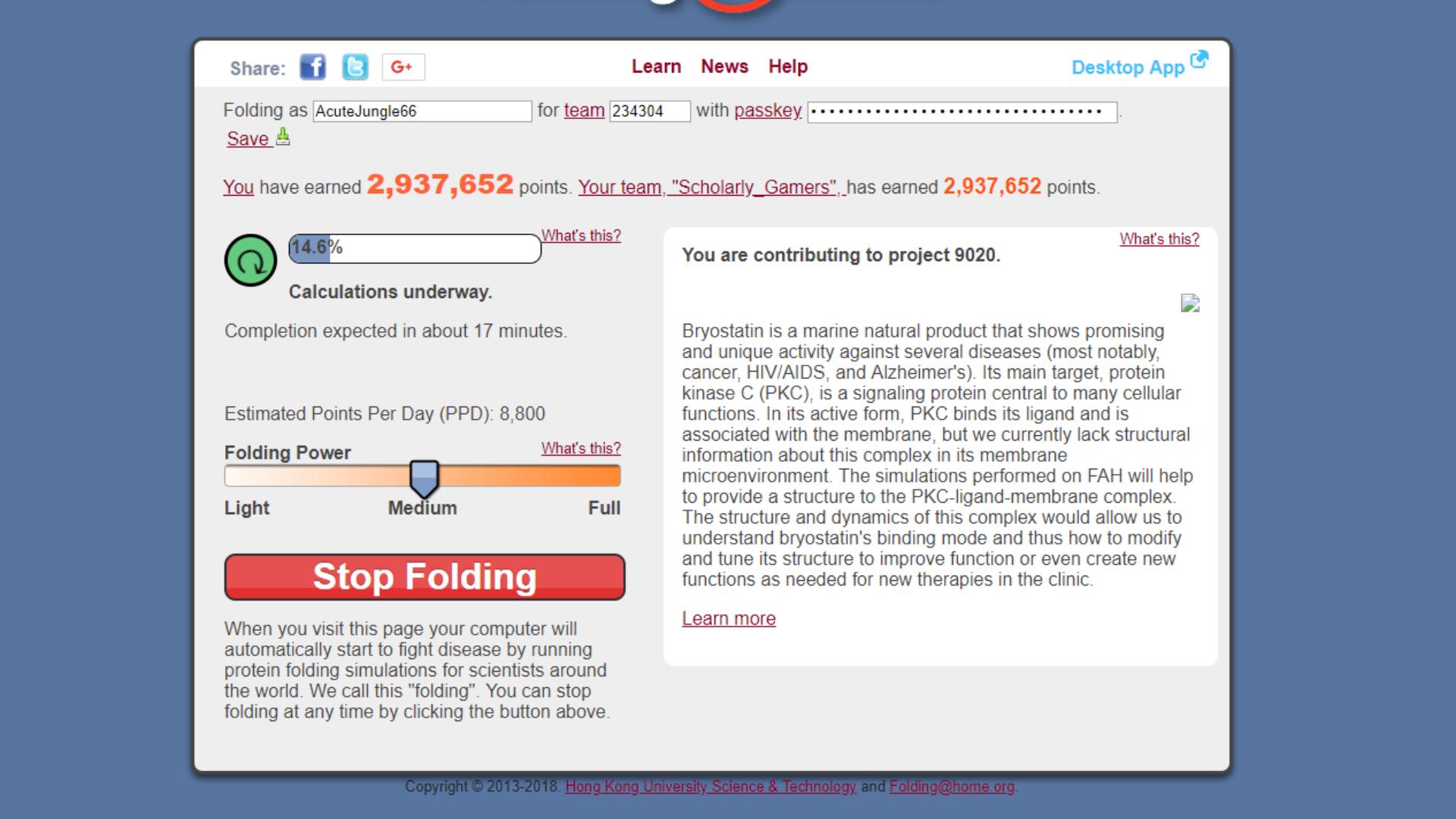 So How Do I Contribute?

If you wish to contribute, you can of course do so anonymously in any way you please, clients are available for Windows/Linux/Mac and can be running on as many systems as you like; just make sure to get permission first (not a good idea to install it on corporate machines for example). Or you can run it from a Chrome Browser by just clicking here. The browser interface is fairly intuitive, and you can select how much ‘folding power’ is used whilst the page is open as well as being presented with a description of the current work unit and its status. But if you would prefer to join the Scholarly Gamers Folding Team, then there are a few extra steps.

If you choose to contribute via the browser, it is worth noting that Folding@home will only utilise your CPU. The slider in the image above equates to the following processor usage: Full = 100%, Medium = 66%, Light = 33%. Using the browser is pretty simple, but does result in constant calculations whilst the browser is open. If you download the client however, it can utilise your CPU as well as any GPUs your PC has; or any combination you prefer (just GPUS or just CPU). I highly recommend using the client, as it allows for much more control; and it also has a web-based interface if you prefer that method.

I used to contribute to a team many years ago, and completed around 269 work units back then. I now have a different ‘handle’, so I am starting from scratch (currently at 112 work units). As I have not advertised or promoted Folding@home yet within Scholarly Gamers, I am currently the only member of the team. Which if you are curious, is currently ranked #4,044 out of 228,008 teams; not bad for just me, myself, and I.

I would love to see members of our community contribute to this great cause, and let us work together to see how high Scholarly Gamers can rank. Not all of us have the spare cash to donate to charity, or even the spare time to volunteer for some of the great causes that are out there; but I am fairly confident that several of us can spare some CPU/GPU clock cycles to aid research directly.

I also have it on good authority that if enough members participate, there may be some form of incentivisation for our internal leader board; with top-folders possibly receiving some goodies! (Interval to be determined)

If you have any questions or concerns, or want to know more before getting involved. Just grab a hold of me either in our Discord or our subreddit, and I will try my best to help if I can.