I’ve been playing Langrisser Mobile for just over a year now. After a very successful launch and celebrating it’s one year anniversary back in January, it’s still going strong. I like to think that it’s thanks to the mobile game’s success that we now have this complete remake for Langrisser I+II. It consists of the full first two games of the legendary SRPG series in a nice, tight package for the Playstation 4, PC (Steam), and the Nintendo Switch. 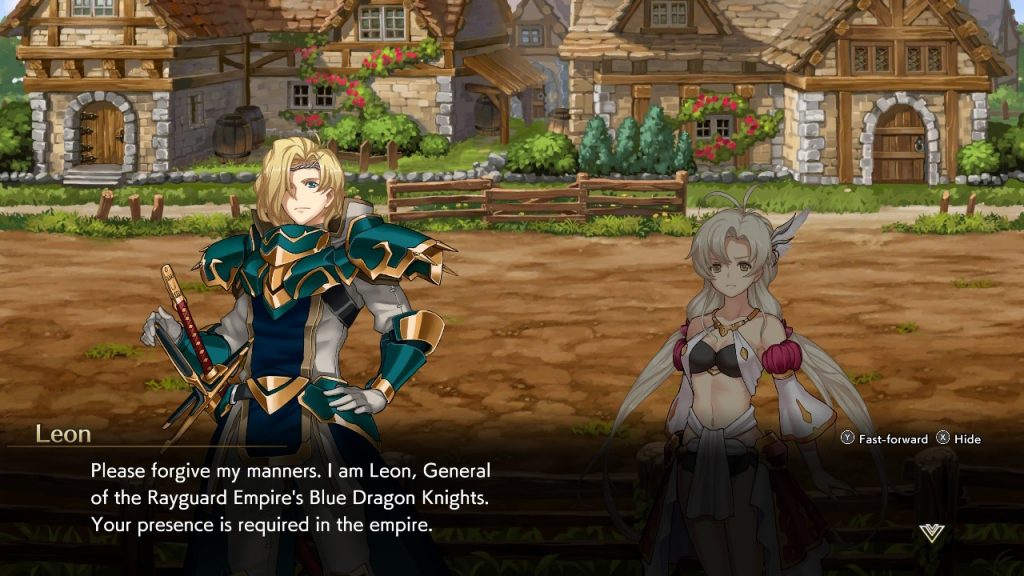 Langrisser I begins when Kaiser Digos of the Dalsis Empire has begun to invade Baldea with an overwhelming number of troops, possessed with the desire to rule the world using the power of Langrisser. Prince Ledin escapes from Baldea during the attack, and must now embark on a long journey to retrieve the Langrisser and avenge his father.

Langrisser II takes place several hundreds of years after Langrisser I. It is an age of countless small periods of strife, that begin and end, only to begin anew. The Kingdom of Baldea is no more, and the legendary sword Langrisser has become just that – a legend. A traveling youth named Elwin encounters and befriends Hein, a magician’s apprentice, during his journey. While staying at Hein’s birthplace, a small village in the dukedom of Salrath, Hein rushes into the inn one night, as pale as a ghost. A group of soldiers from the Rayguard Empire has attacked, seeking a girl named Liana who lived just outside the village. Why would the Empire do such a thing…? Feeling a sense of suspicion, Elwin departs from the inn in order to help Liana.

Not a bad setup for the story, but the story is not the main focus here. It’s the tactical gameplay. Much like other SRPGs, you command your units across large maps filled with enemies, completing the objectives of each to advance to the next chapter. Pretty basic, but there are a number of systems in place to mix things up a bit. 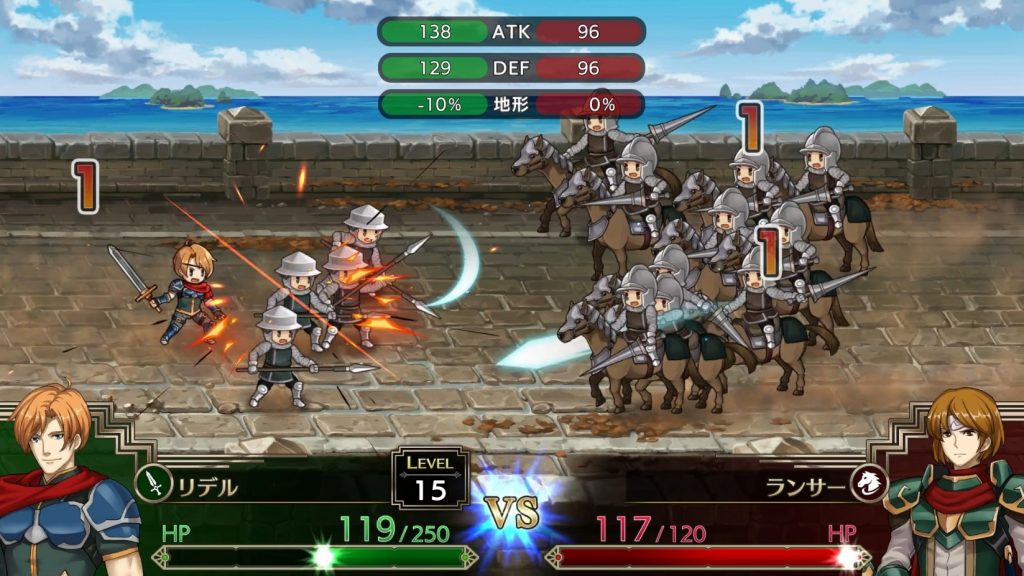 In addition to commanding your main units, who serve as “Commanders” on the battlefield, each Commander can hire a number of mercenaries to supplement their strength. When I say hire I mean you literally pay money at the start of each map to recruit them for that battle, but don’t worry – money is plentiful if spent wisely. Your hired mercenaries can be moved about on their own just like their Commanders, but they are at a bit of a disadvantage due to lower stats when they are not near their Commander’s Area of Command.

As you level up your commanders, you’ll get access to new mercenaries. Some are lance-wielders, some are calvary, and some are even monsters like harpies. Each have their own strengths and weaknesses against other units in a basic weapon triangle that you’ll pickup on as the game progresses. Each of your commanders also have a skill/class tree that can unlock new mercenaries and special skills. These can boost their stats or afford them special perks in battles, such as boosted damage against other units or access to special area buffs to boost your allies. Some units also learn powerful offensive and support spells, and trust me when I say you’ll want to invest some time building up your spellcasters. They become VERY powerful later on, and will make difficult battles MUCH easier. 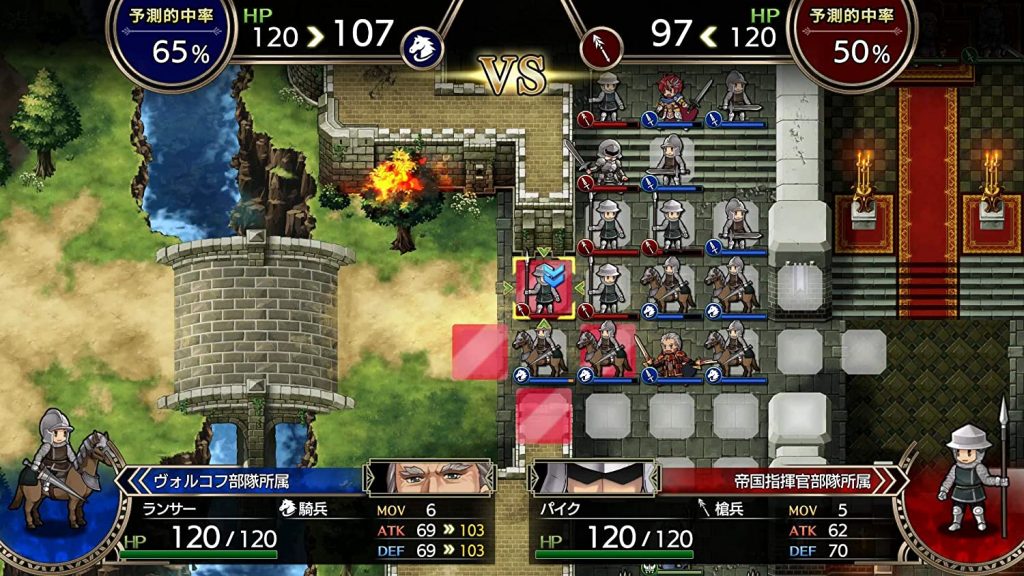 In addition to the “normal” story route, Langrisser II has a couple of branching paths you can take, depending on certain choices you have Elwin make. I won’t spoil things, but you’ll want to keep a couple of different save files so you can see everything play out.

The original Langrisser title we got here in the west (“Warsong” for the Sega Genesis), was known by fans of the genre to be exceedingly brutal. Your units were very often at a large disadvantage at the start of each map, and it was up to you to find a way to overcome that disadvantage. Needless to say, this didn’t sit well with the more casual crowd, and the game was something for only the more hardcore fans to enjoy. This version however, is much easier for everyone to dive into. You can return to previous chapters to grind for EXP and gold, and the overall stats of enemies seem lower than the original game. You won’t struggle nearly as badly with this remake. 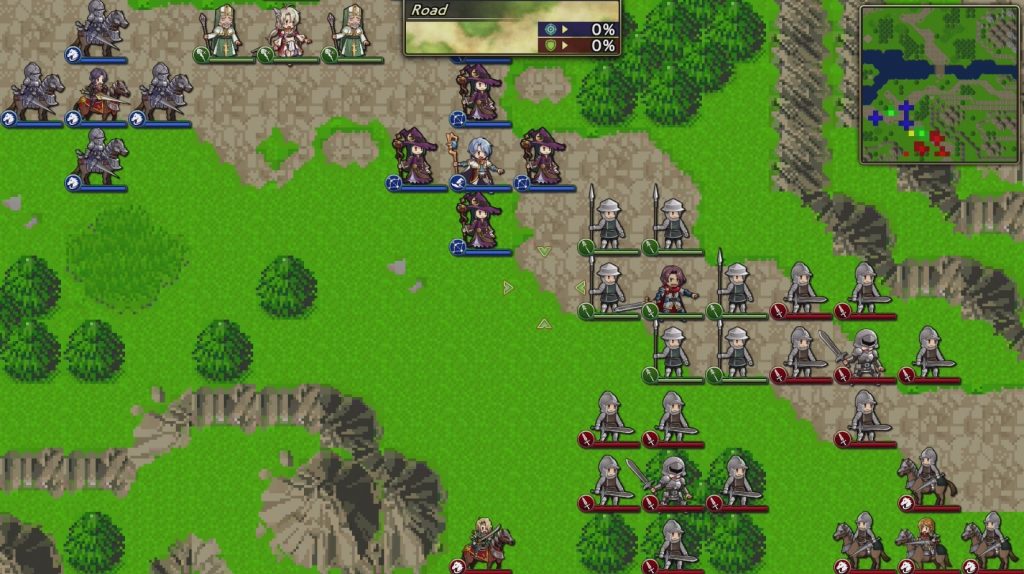 One of the high points of the Langrisser series is the artwork. The art from the original games and artist (Satoshi Urushihara) is here, as well as new art from Ryo Nagi, who also did the art for the Ar Tonelico series. You can freely toggle between both art styles at any point in the game via menus, which is a very welcome option. While the original art has a certain nostalgic charm to it, the new art isn’t half bad either.

A new remake also means new version of the soundtrack, and Langrisser has plenty of memorable tunes to choose from. I became familiar with a lot of the music in the game thanks to the Langrisser Mobile versions, which I still somewhat prefer, but some of the tracks in this remake are still really good. 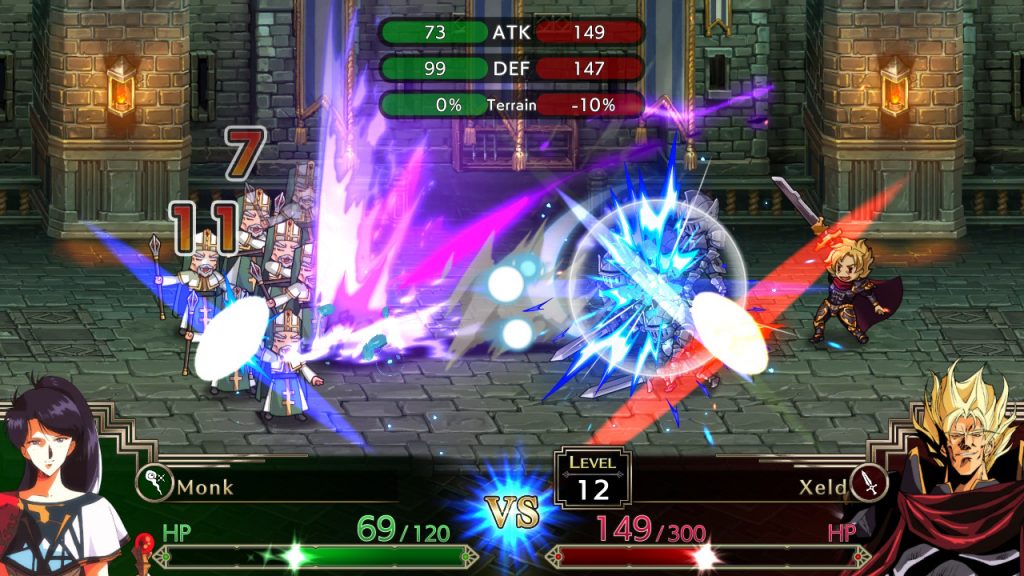 In my experience with the Nintendso Switch version, I did not run into any glaring issues when it came to the game’s performance. I do, however, have a couple of small nitpicks with the game itself. While the game does have somewhat of an Auto Battle feature in the main menu (End Turn and any units who have yet to move will then be moved automatically), you still have to sit and wait for each unit to move before the turn flips to the enemy. This means you have to sit and watch your Commander AND all of their mercenaries move before the next turn happens. When you have 4-6 Commanders on the battlefield, each with 4-6 mercenaries assigned to them, this can take quite a bit of time — causing the battle to go on for far longer than it should.

An option to speed this particular part of the game up would have been a godsend. It also takes quite some time to level up, even early one. Also, taking out a Commander will cause all of their assigned mercenaries to retreat from the battle. However this applies to friends and foes alike — so if one of your Commanders die, all of their mercenaries go with them, even if they are otherwise healthy and could still contribute to the overall battle. Even if one of your units is fairly powerful, be careful not to let them get overwhelmed.

Despite my nitpicks, Langrisser I+II was a very enjoyable time. Having become a fan of this series recently it was nice to see how it all started, even in the form of this remake. I would definitely recommend this game to fans of the mobile game, or strategy RPG fans in general, but I wouldn’t call it a must-have title. For the price it’s a great deal, and you’re sure to get many hours of enjoyment from it if this is your genre.

The definitive version of two classic SRPGs, Langrisser I+II offers hours of intense strategic gameplay for even the most casual fans of the genre.