Stranded Sails: Explorers of the Cursed Islands is the latest in the adventure/gathering/farming genre that has had some marked prevalence over the past several years. After finding yourself stranded on a cluster of islands, you must work together with the former crew of your ship to make the most out of island life. Luckily, life on the Cursed Islands is very structured, and finding your way is often as simple as following the directions given to you.

Stranded Sails is a much more linear roleplaying adventure game than you may initially expect, and instead of finding yourself freely exploring the islands and farming or crafting at your leisure, you will be directed along a set path of quests which will guide and structure your creativity. While the game does allow you to freely explore the islands, there is never much purpose to stray from specific quest tasks. The game’s largest detriment is that Stranded Sails never invites the player to break out of that box and instead confines the player within the narrative. 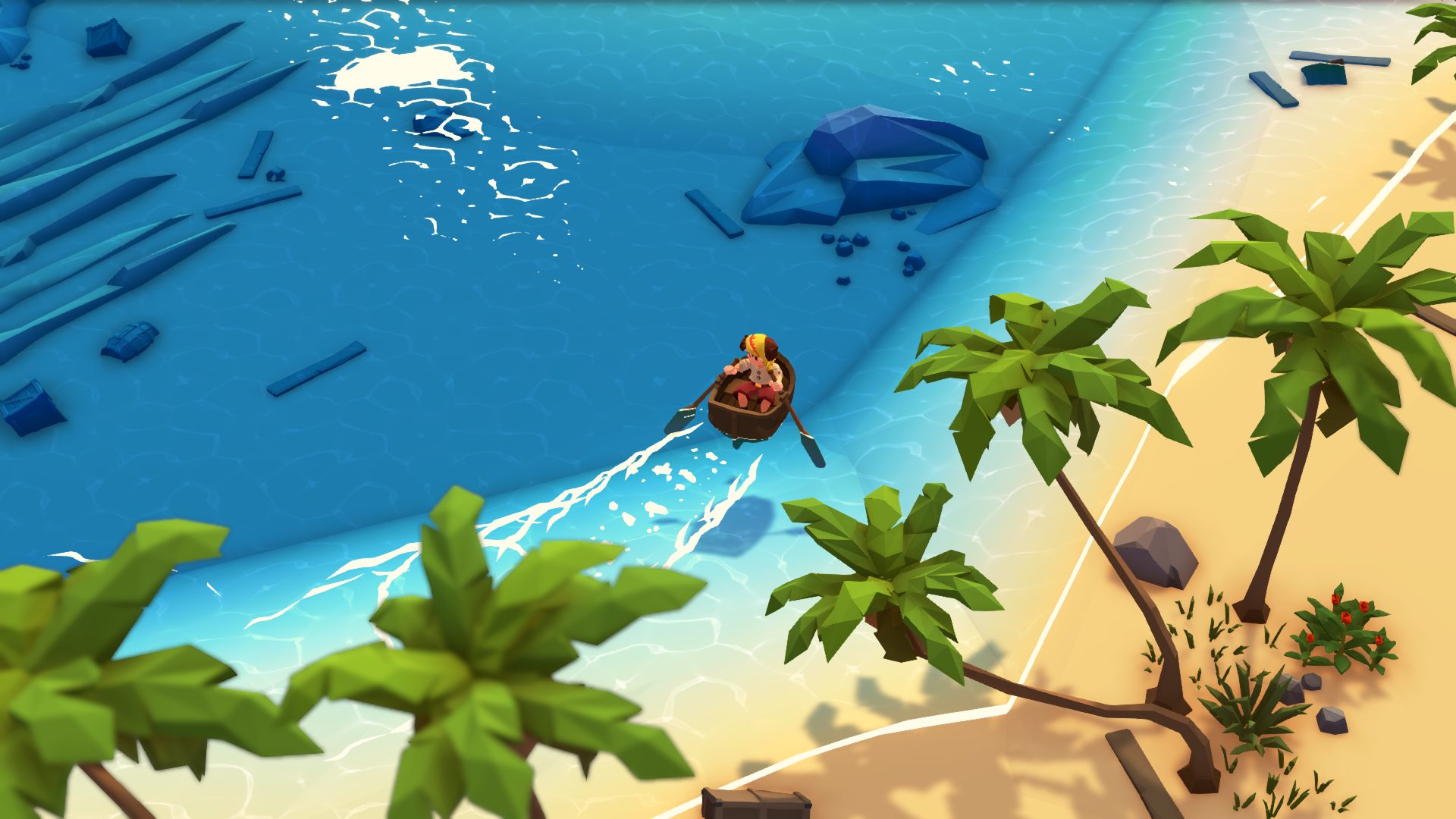 There are a lot of things to do in Stranded Sails, but each of them have a very narrow purpose. You can farm, cook, gather materials, build structures, explore and fight, but each of these activities has a very singular purpose to them. You farm only so that you could cook, which you do only to sustain your energy. The only structures you build are specifically quest-related, and gathering materials only serves to further that. In other words, it lacks that feel of organic progression that is essential to this genre; the creative driving urge that pushes you as a player forward.

In other words, unlike other games in the genre which avail the player to a fair amount of freedom in how they want to play them, Stranded Sails simply tells you what you need to do next. There is always a specific objective to guide you, and doing anything other than that typically serves no overall merit. For players who find the more free-form nature of other similar games to be daunting, the more structured atmosphere of Stranded Sails may appeal to them a lot more. For me personally, I just found it held my hand far too much. 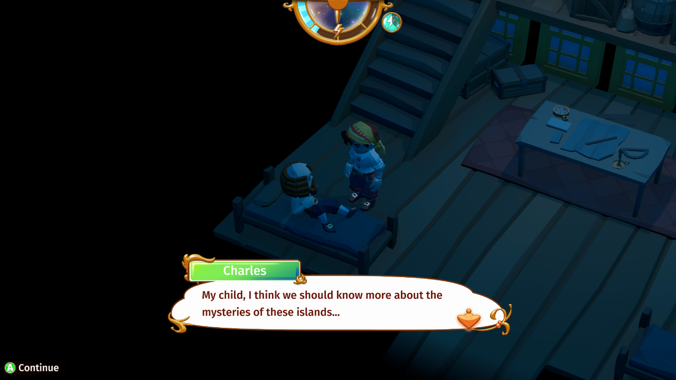 Everything in the game just feels far too structured for a “roleplaying simulation” and instead it winds up playing more like a gathering adventure with a rigid quest-line. If you step back from any expectations of free-form simulation though and lose yourself in the adventure, there is still fun to be had as an Explorer of the Cursed Islands.

Life in Stranded Sails is governed by your energy, which feels like it drains at an alarming rate especially during the earlier hours of the game. Luckily, you can prepare meals that give your energy a boost to allow you to continue your adventures a little while longer.

You’ll find that adventuring off of your home island takes a lot of energy, and many times I was next-to-exhausted by the time I’d reached my destination. For this reason, you always have to ensure that you have completely filled your backpack with cooked items; the higher level the better. Typically even with a full pack I was only able to adventure off the island for 5-10 minutes before I had to return, because the energy drain was so fast. You can fast travel back to your camp, which saves both time and energy, but in many cases I had to do that just to refill my energy and head right back. 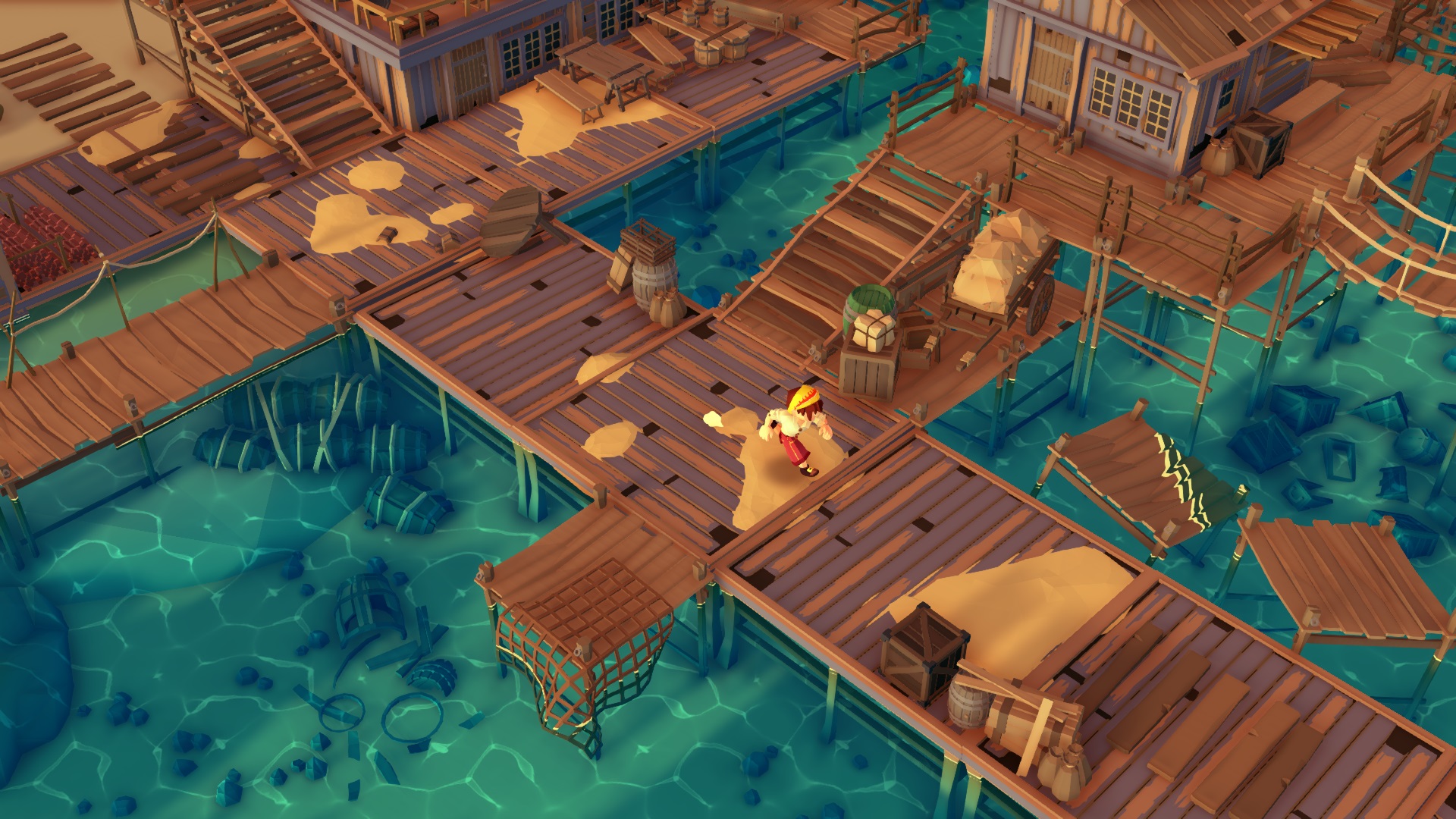 Adventuring through the islands is the best part of the game, although even their designs are somewhat rigid. In many areas you can only travel along specific paths that are carved out of the terrain, and on several occasions I got stuck trying to hop off a small ledge to take a shortcut. That being said, exploring them to find all of the hidden lore artifacts, and opening up new areas as blueprints became available were some of the more enjoyable parts of my experience with the game.

You have to be on the lookout for new crop seeds, wooden crates, and chests while you’re exploring the islands as you’ll require many of these items for future quests. Except for crop seeds. I have still yet to determine why Stranded Sails has such a vast array of food and a somewhat convoluted cooking system, when it all serves the same purpose: restoring your energy. 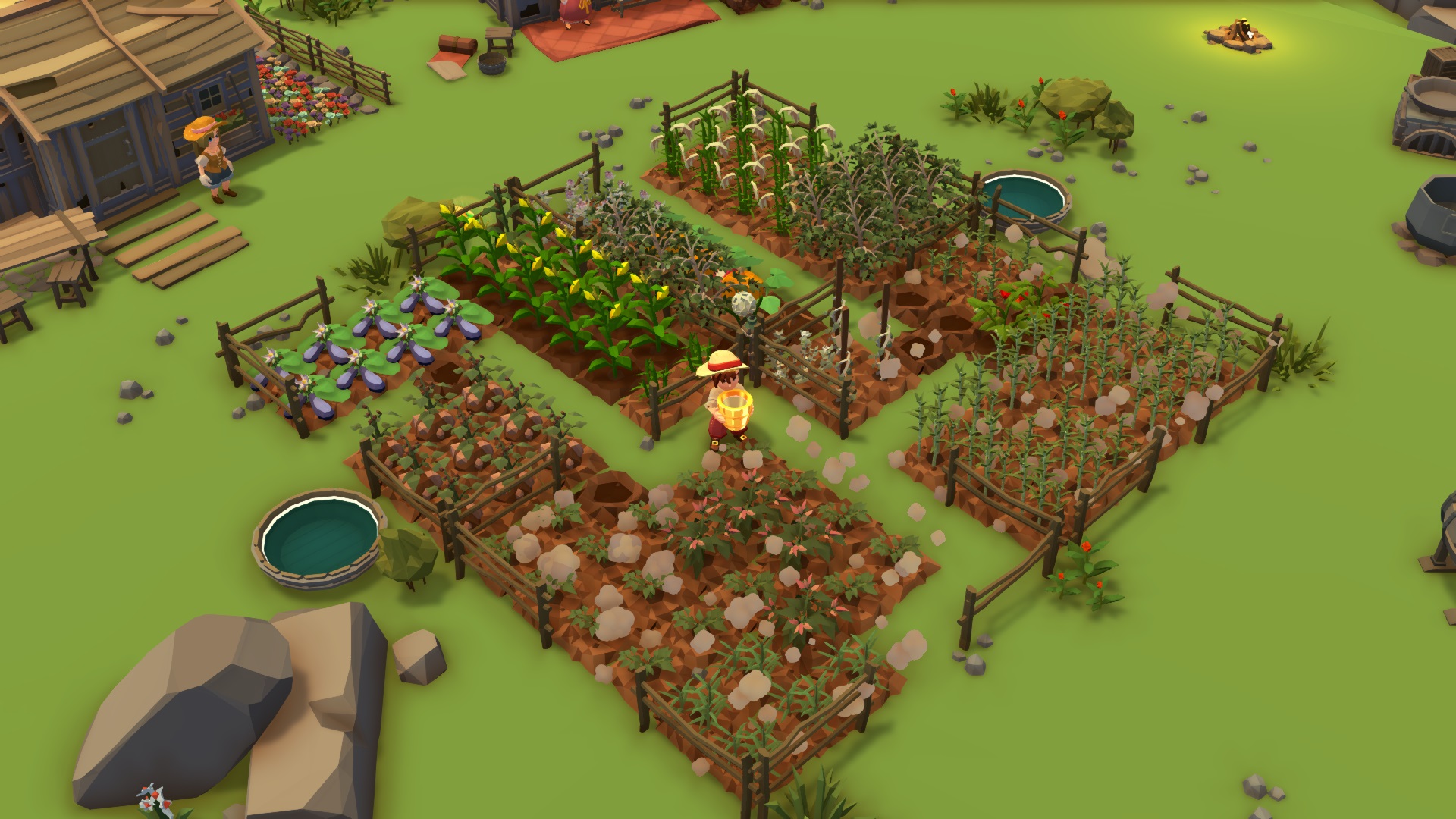 There are dozens of different crops and food items, including spices you can find and fish that you can catch, but it feels like there should have been more purpose to the farming and cooking systems. Different recipes restore different amounts of energy, and the occasional small buff to energy or combat, but otherwise don’t have ulterior purposes, such as gifting them to neighbours or selling them. But first you’ll have to “Discover” them, which is easily the most frustrating trial-and-error system I have ever encountered in a sim-cooking experience.

Every recipe has a number of ingredients which are represented by question marks. You have to guess from your available ingredients which ones are correct, but they must correspond to the exact recipe you are trying to guess at. At first when you only have a few ingredients this process is relatively simple, but let’s say there are 15 undiscovered recipes each of which has four ingredients. You have to figure out the exact recipe you are trying to cook; you can’t just select four ingredients and if they correspond to a locked recipe you’ll unlock it. Even if you’ve found the correct ingredients, they have to be in the right spot, which in itself can be annoying when you’re dealing with four-plus ingredients and trying to remember which orders you’ve already tried them in. 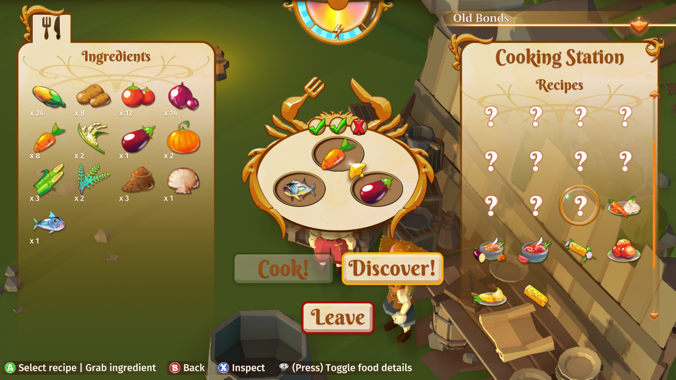 I’ll save everyone reading this review some time: the first marker corresponds with the top ingredient, and then it moves clockwise. That took me a ridiculous amount of time to figure out, because there are no clear indicators and for the longest time the pattern appeared to be at random. And honestly, I’m still not even 100% sure if this is always the case, because I’ve had recipes where this system even fails. 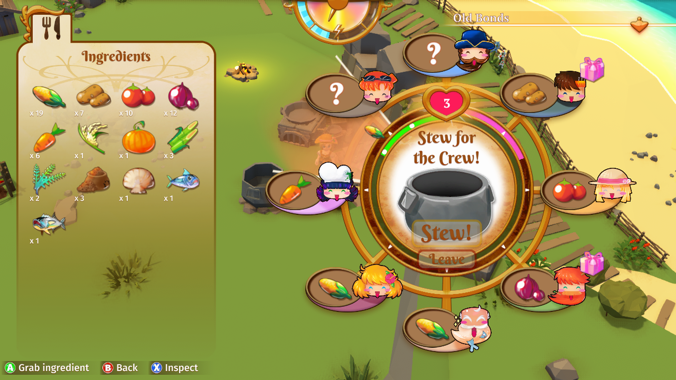 Making a good stew for the crew is a necessary part of the game, not least of all because it will provide you with a substantial energy boost and a buff that decreases the amount of energy used by all actions. Picking ingredients that your crew members like will improve your relationship with the community, and as you level that up people will give you gifts, such as upgraded tools or expanded inventory slots.

Gathering materials in Stranded Sails can be a bit of a drawn out experience. You can cut down trees that you find in specific areas to get wood, but the majority of items you have to find, seemingly at random, in boxes that are scattered throughout most of the islands. Instead of being able to craft many of the base necessary items, such as metal scraps or rope, you have to rely on these containers and a bit of luck in finding the right materials. It’s by no means a bad system though, and it works very well with the shipwrecked-narrative; you are scavenging the materials that washed ashore on the other islands when your ship capsized. 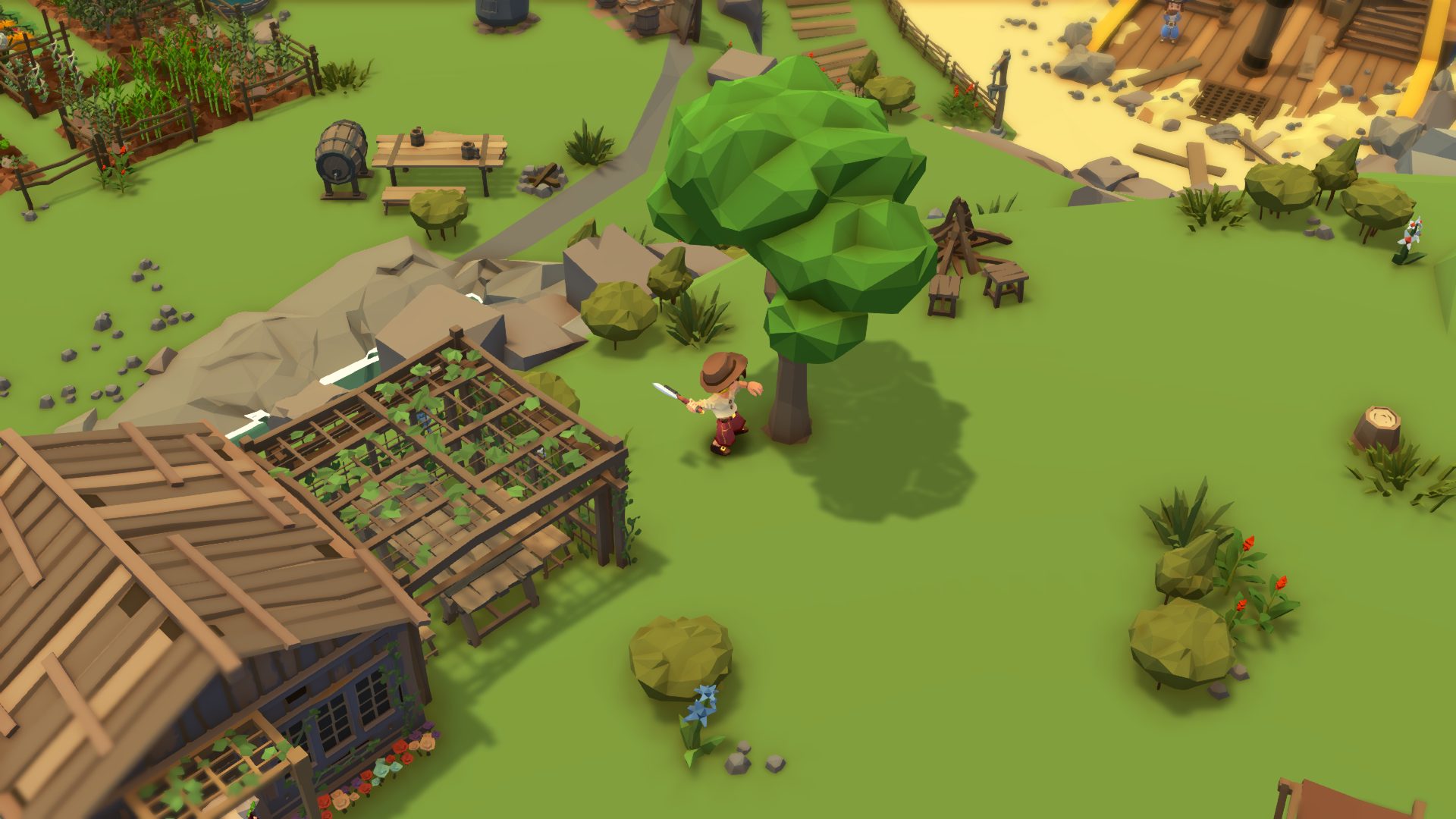 Much like the rest of the game, combat only occurs within a neat little box. You’ll come across totems in the game that will spawn enemies, and then the game automatically equips your sword and locks you into combat. Combat itself is relatively simple; swing your sword and keep moving to avoid enemy attacks; there is no block or dodge here.

Again, there is nothing wrong with the combat system itself, but for my tastes it was just far too simple. For younger gamers or players who are just looking for a little bit of swashbuckling on the outskirts of their farming adventure, it will likely be the perfect formula. Once you have progressed a bit deeper into the narrative as well, you are even afforded the opportunity to face off against waves of enemies to try and best your score. 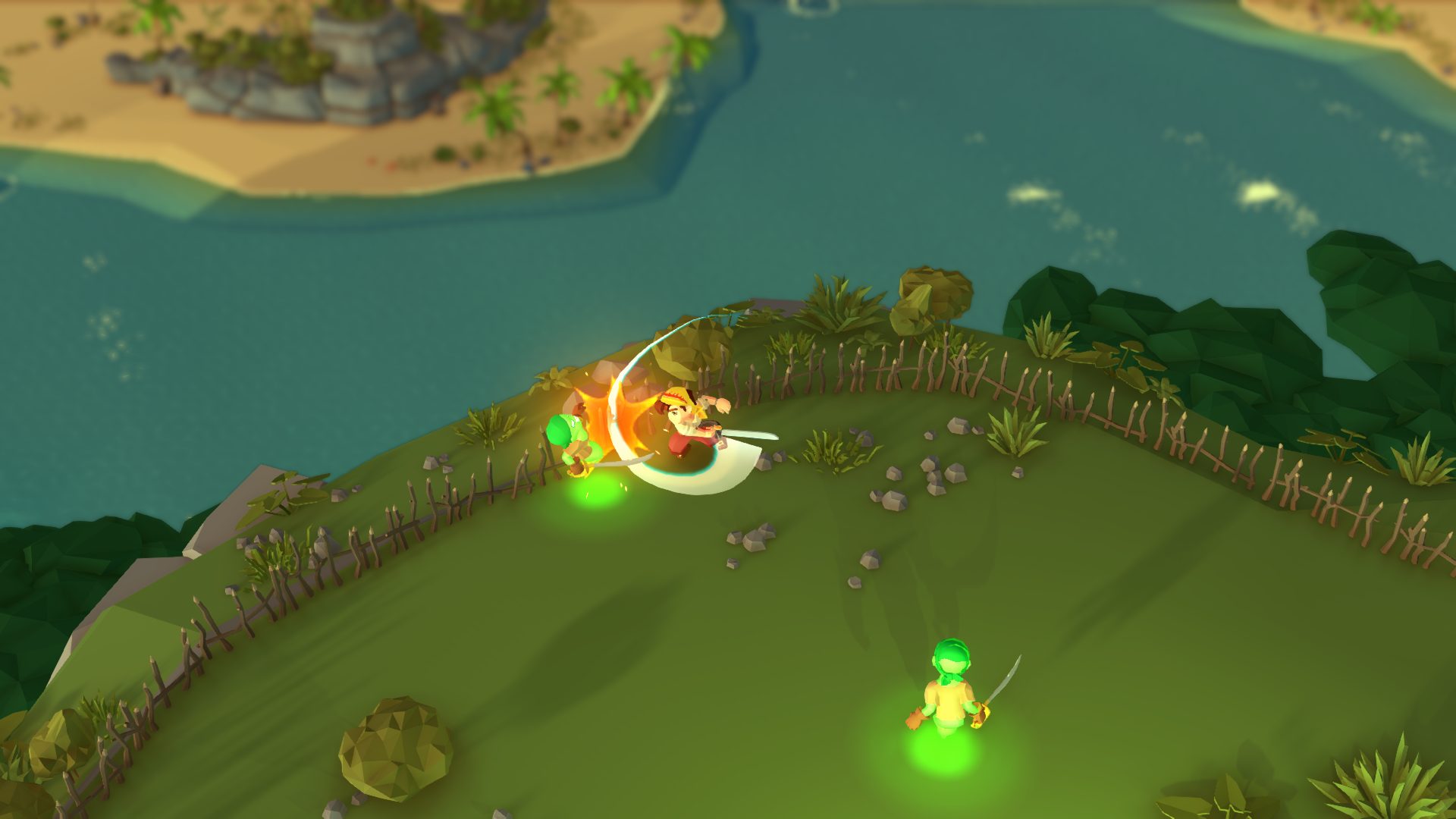 I really wanted to love Stranded Sails, and there are a lot of good ideas that are contained within the package. Unfortunately though, the majority of the game ends up feeling like a tutorial for itself, and the gameplay loop borders on tedious at some points. If it wasn’t for the convoluted recipe discovery system I think I would have enjoyed the game a lot more, but the hours I spent through trial-and-error were painful and took the wind out of my sails.

While Stranded Sails: Explorers of the Cursed Islands falls short of offering any advancements to the formula, it does still provide the quintessential gameplay loop that has brought the farming-adventure genre to the forefront in gaming. While it’s guided gameplay was a little too strict for my taste, I feel like younger audiences and people looking for a relaxing ship ride may find what they are looking for here.

Stranded Sails wants to be a lot of things, but unfortunately spends far too much time holding your hand to let you really explore the Cursed Islands.

Konami Has Confirmed They Are Still Considering Silent Hill