At first glance, I was certain that this equation would make for an incredibly compelling package. After working my way through the six-or-so hour campaign and taking in the entire package however, this title ambitiously swings for the fences but unfortunately only knocks out a ground-rule double on execution.

Concrete Genie is an ambitious sophomore title from PixelOpus, the studio that created 2014’s Entwined. In this game, you take the role of Ash, an artistic, quiet boy living in the fictional town of Denska. The town has been abandoned by many of its citizens because of severe pollution that persists in the environment. At the start of the game while walking through town, Ash meets up with the initial antagonists of the game: a set of trouble-making bullies. These bad seeds rip up Ash’s sketchbook, setting him on an adventure to recover his sketches.

Very quickly, Ash discovers a magic paintbrush that allows him to paint living graffiti on the walls. Alongside the paintbrush, Ash comes to meet the living versions of two of his drawings: the larger Luna as well as a smaller companion in Splotch, who lives on his sling bag. With these new companions in tow, Ash quickly gets embroiled in a much larger narrative that will require Ash to grow not only his skillset, but his courage at the same time. 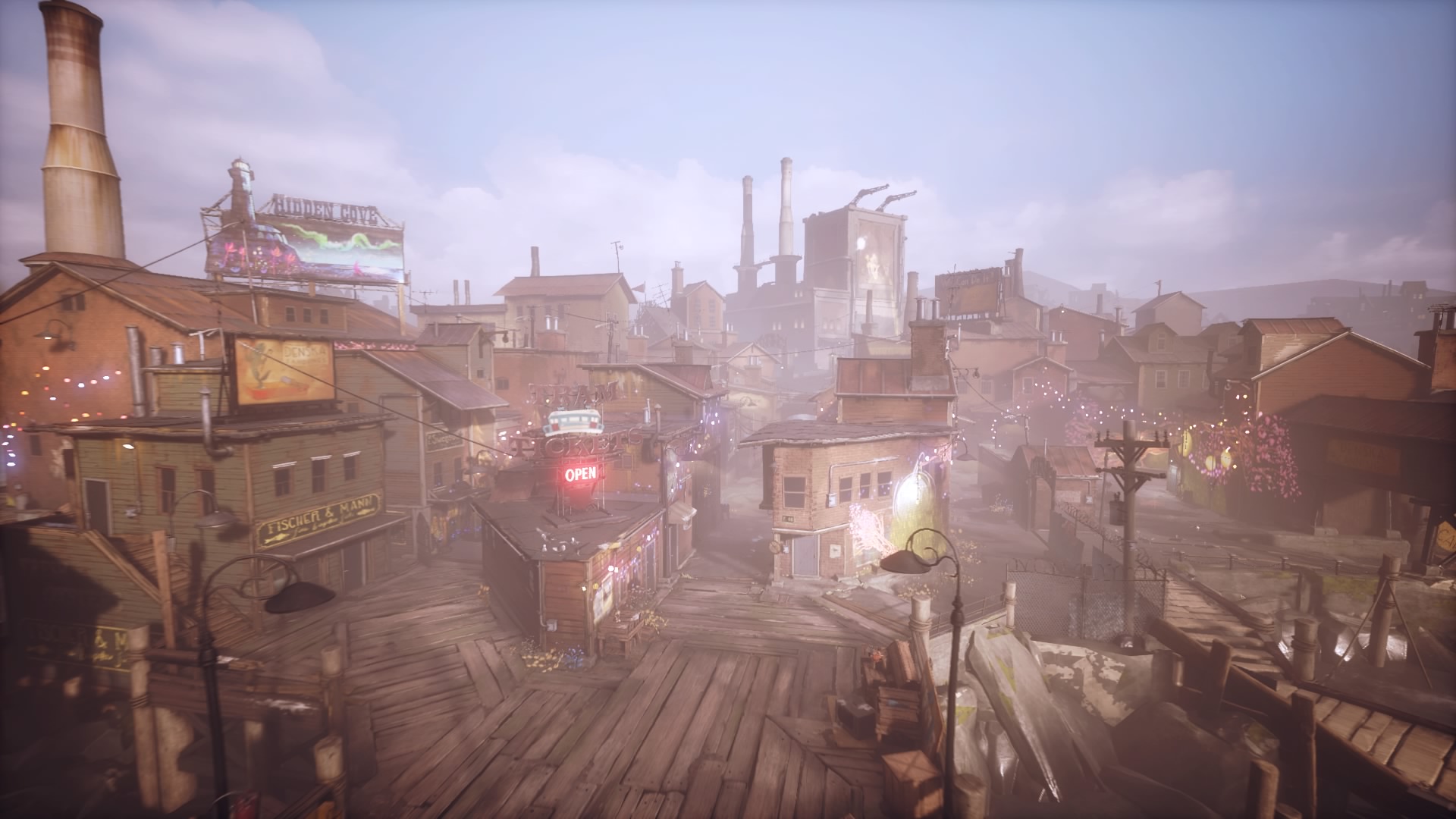 The game has incredible style and awe-inspiring artistic direction. In easily the most artistically impressive game that I have played this year, you will move between a small set of locales; from a Scandinavian-inspired fishing town to the underground sewers. I immediately thought of many different films and games that made me feel the same way as Concrete Genie: the 1994 film The Pagemaster and What Remains of Edith Finch came to mind as two examples.

These areas get more beautiful when you begin to plaster the walls with your florescent art. The gameplay centres of creating this art that persists in the environment. From a technical perspective, however, the game did hitch and slow down at times. At no point did this affect gameplay, so it was a minor annoyance. I played the game on a base PS4, so this may not be an issue for those with a PS4 Pro and it may be patched out in the near future. 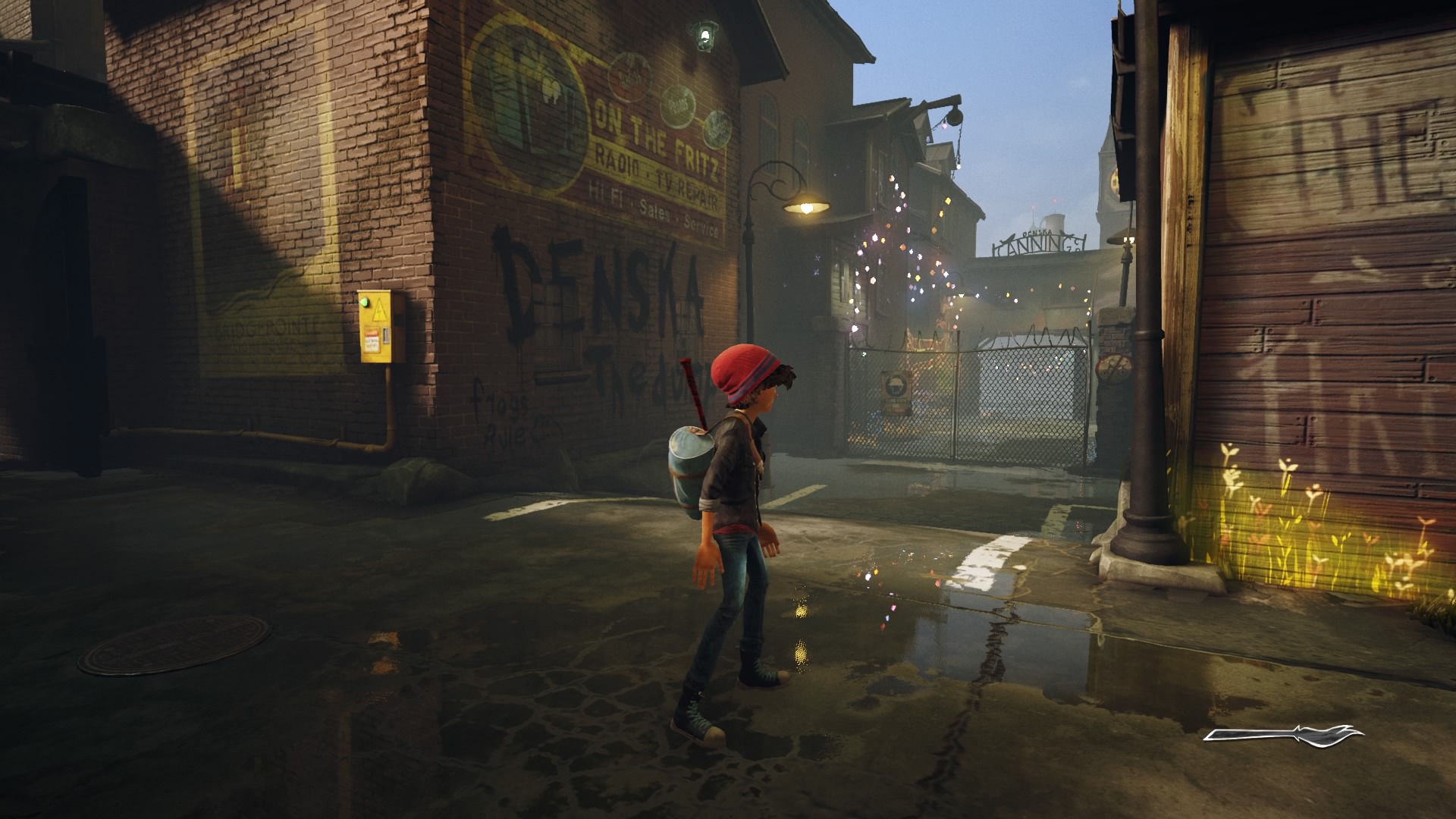 Unfortunately, the gameplay in this six-hour title was not as impressive as the visuals. The game focuses on exploration and platforming as well as painting mechanics for the first two-thirds of the experience, with more action-focused mechanics being added in the back-third of the game. However, the game does not have the same mechanical fluidity as other action-adventure games in the genre. Furthermore, the mission and game design is generally boring and becomes quickly repetitive.

In my opinion, the core issue is that Concrete Genie has major identity crisis. The story is cute and has some nice morals to it that would be very well-suited to an under 10 year-old crowd, but many of the mechanics in the game may be complicated for someone around the same age. On the flip side, this game may bore adult players both from a story perspective.

Starting first with the controls, it took me awhile to get used to the intricacies of the painting in the game, which is at the core of the experience. As Ash collects more and more of his sketches, he can vary the living elements that he tags on the walls. You will start with basic stars and trees, for example, but will get more varied elements as time goes on. In order to tag the walls, you have to hit R2, which brings up a menu where you can choose from your different “tags”. You have to flip within an on-screen sketchbook to access some of these elements.

By default, you have to use the Dualshock 4’s motion controls to paint on the walls. Painting in this manner took me at least 3 hours to get used to. I applaud the game for having accessibility options for those who struggle with these controls or have a mobility/physical disability, but the alternate control scheme uses the right thumbstick, which is the same stick as the camera. I could never seem to find a control scheme that made painting pleasant. After playing with the camera sensitivity, I was able to work through the painting sections, but I was often fumbling with it as I went. 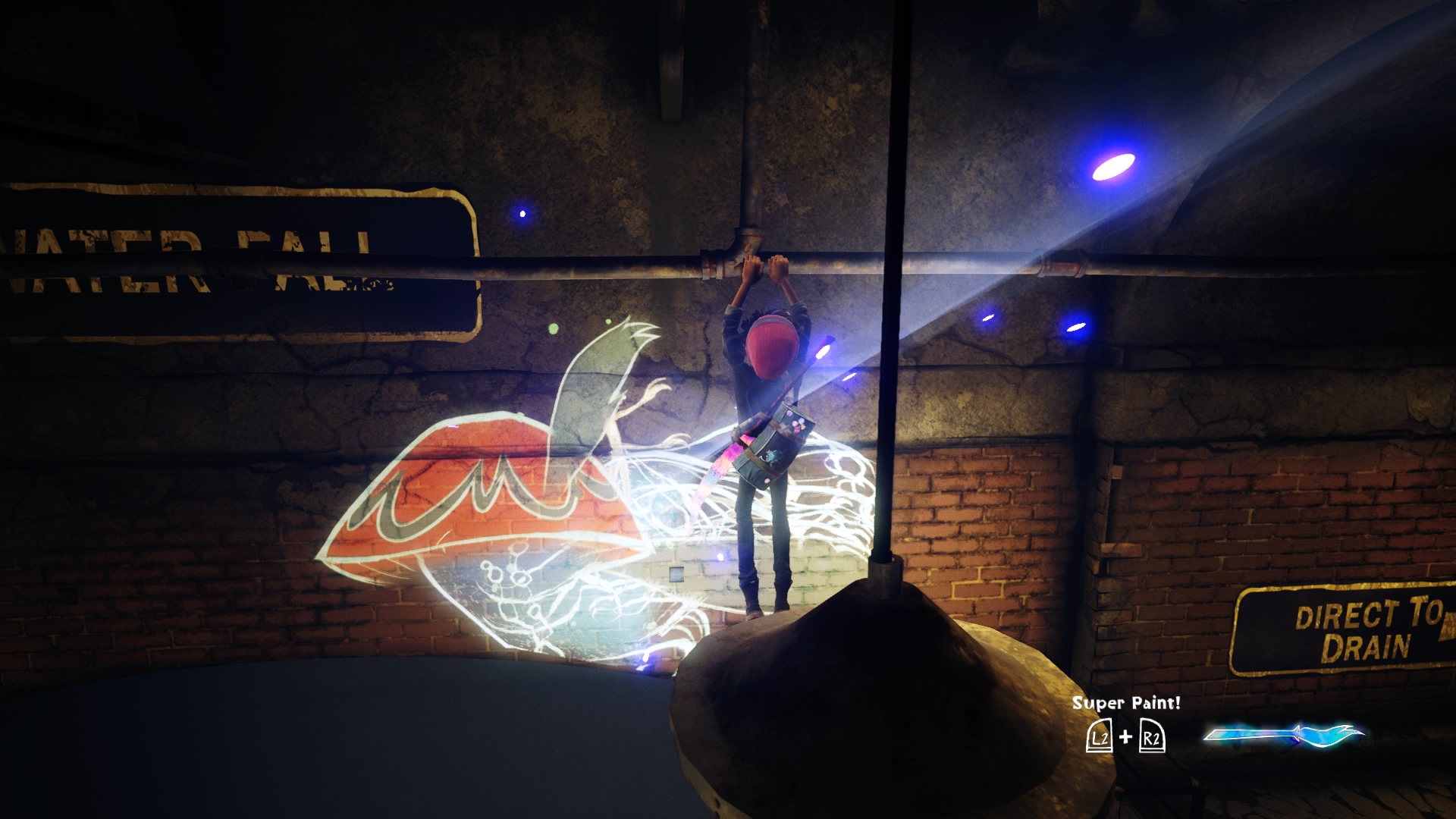 Beyond painting, the jumping wasn’t as tight as I needed it to be, especially during the occasional platforming sections that the game threw my way. The camera in the game did not move well either. In small spaces, the camera would get stuck behind the environment and I would constantly be turning it instead of relying on its automatic movement.

From a game design perspective, the title is really strikes me as a PS2-era licensed platformer. In order to advance through most of the game, you will have to paint sections of string lights in the environment to unlock different sections of the larger map while finding and creating Genies. These genies come in different colours, each with their own elemental powers that will help you to solve some very basic environmental puzzles. Some areas of the map require you to have “Super Paint”. This mechanic requires you to draw specific elements on the wall for your genies, at their request. It was a pointless mechanic that just caused me to go out of my way. Paint some lights, make some genies and solve environmental puzzles. All of this leads to creating a “masterpiece” in the environment, which will cause a world-shifting element like the activation of a lighthouse, for instance. This will unlock the next section. 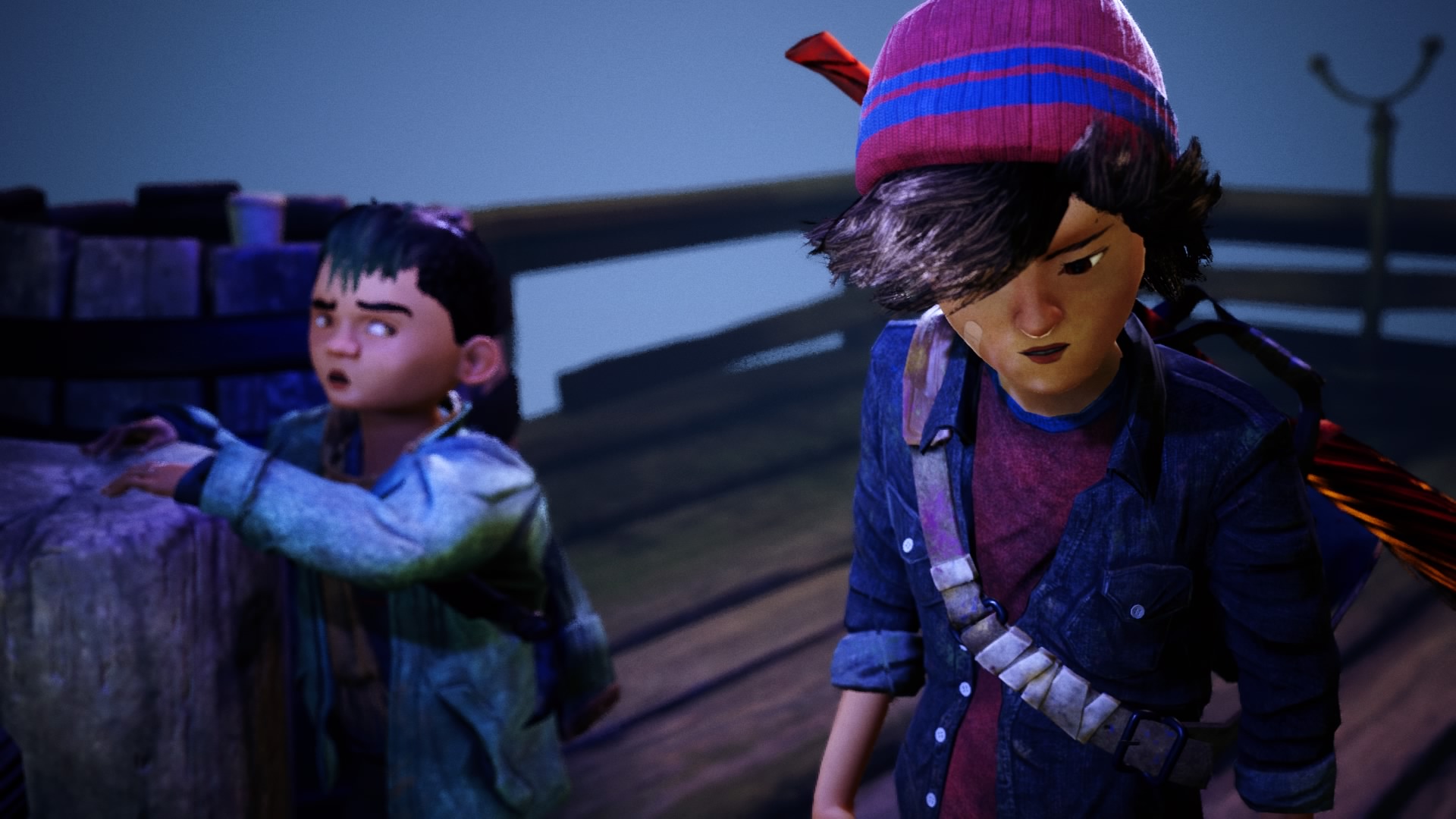 Without entering spoiler territory, the game adds some more interesting gameplay elements in the final two hours of the game, but even those elements can’t completely absolve Concrete Genie. The game is more boring than it should be given its incredibly impressive visual style. It reminded me a lot of the original Sly Cooper; a game that struggled with a repetitive structure and mission design, but looked great and left us hopeful for a more complete and interesting sequel.

Despite having a childlike difficulty level, I was still occasionally challenged, but that was from a lack of direction in the game. Much of the game’s information (like the map, for instance) are buried in the pause menu. The game could have used a mini-map and visual waypoints to facilitate progress in the game. 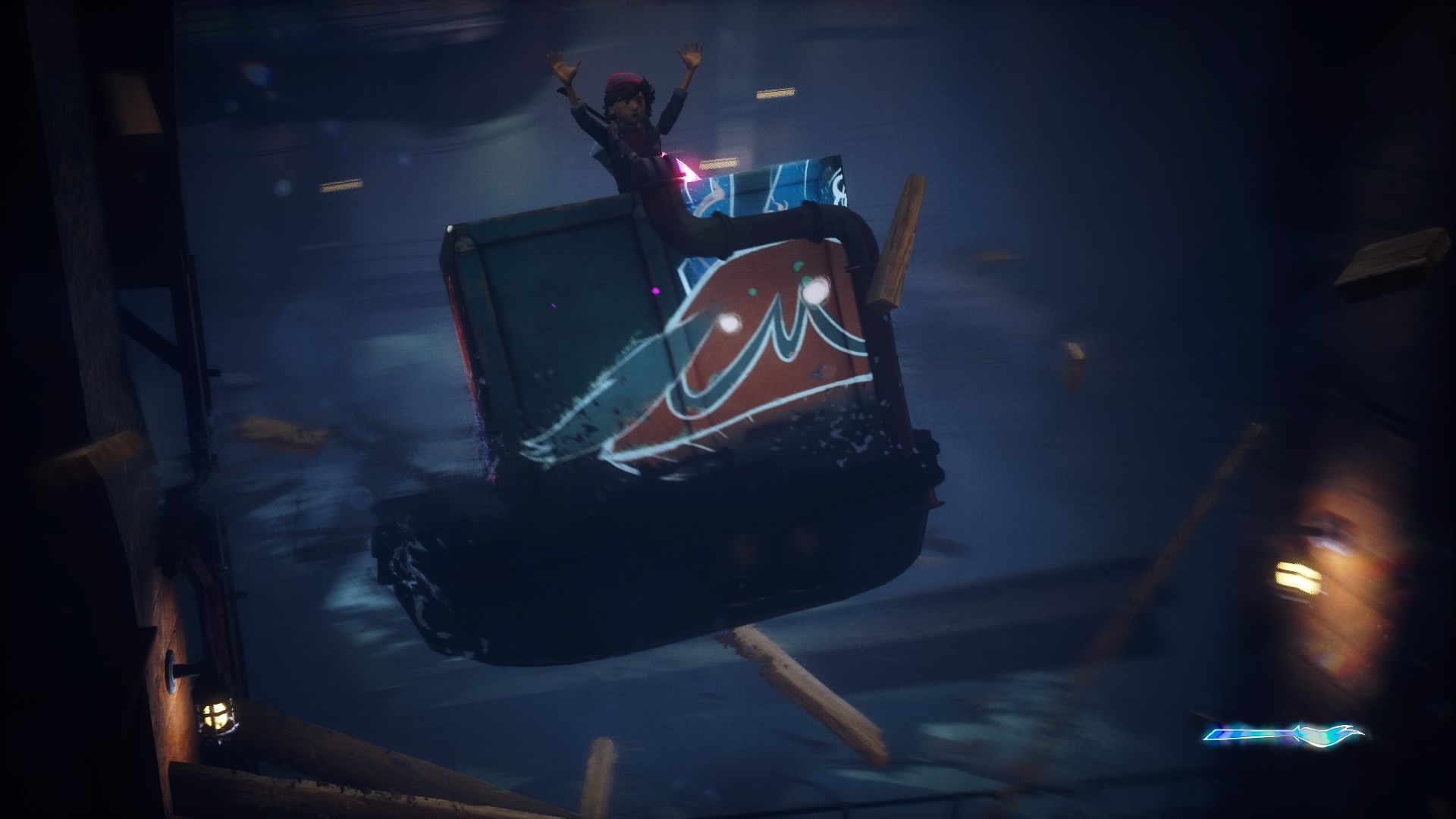 The sound effects in the game were pretty repetitive, but that was the only sound element that bothered me. The voice acting from the half-dozen speaking characters in the game was good and the music was excellent. Sam Marshall, the composer and the audio director at PixelOpus, put together a really interesting pastiche of sound for the different elements at play in the game. The game soundtrack relies on three elements: analog synths for the magical elements of the game, flutes to represent the themes of adolescence and the cello to represent the themes of bullying and adversity.

If you liked the soundtrack for Ori and the Blind Forest, for example, you will find a lot to love here. Ash, Concrete Genie, Denska and The Map in particular are great tracks. 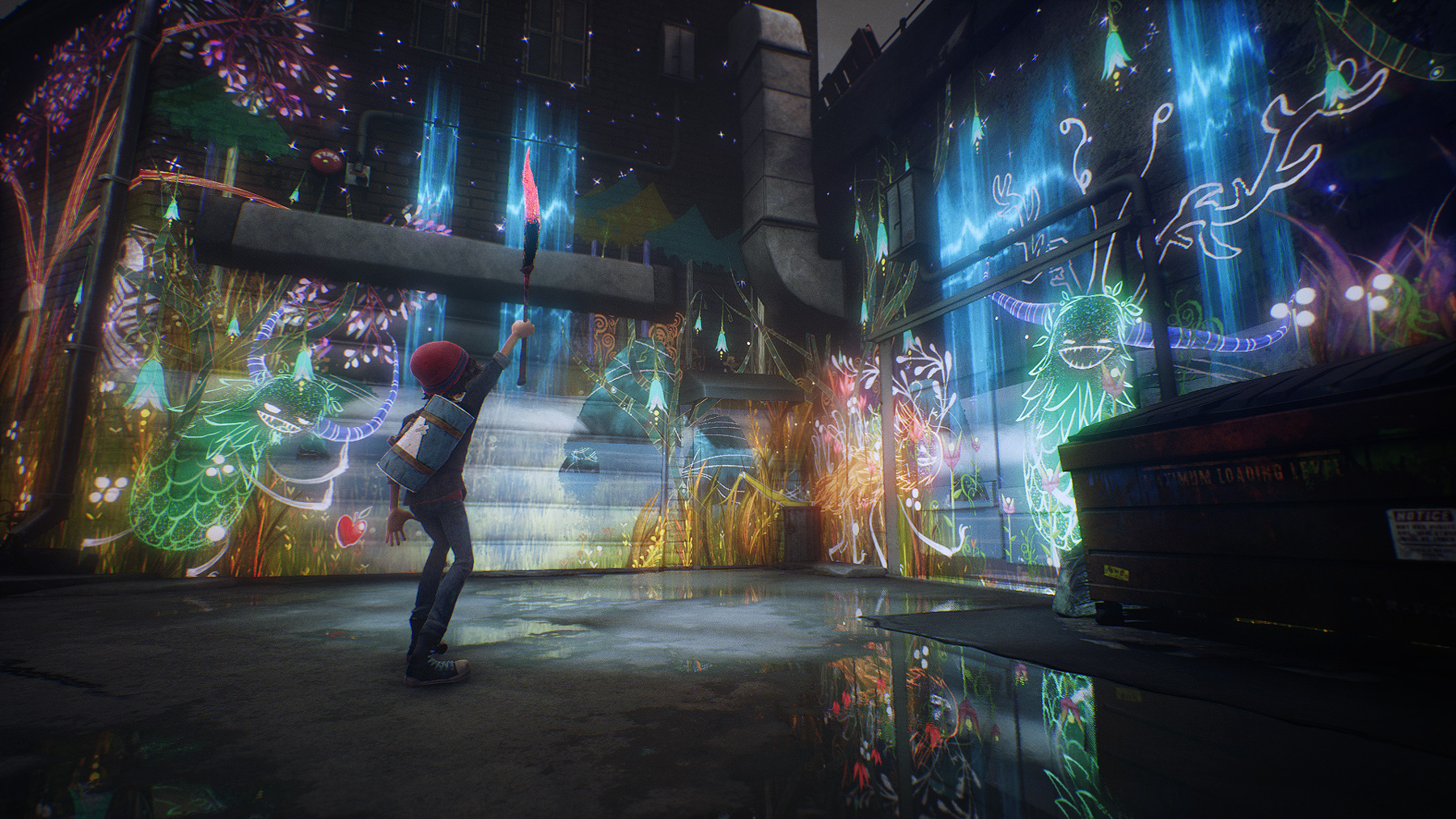 I can really appreciate the world and story that PixelOpus put together in Concrete Genie and you have to love when studios swing for the fences with a new game concept. However, when you move past the excellent art and music in this instance, you are left with a very middling platformer that doesn’t reach out and grab you with compelling gameplay.

If you are a parent with a child under 10 and you’re looking for a title to play together, you should absolutely pick this one up. Beyond that, you may want to seek experiences from other games in the genre.

Concrete Genie is an artistic powerhouse, but isn’t as interesting to play as it is to look at. You may find some enjoyment here, but there are better titles in the genre for adult players that you should look to first.