ToeJam & Earl: Back in the Groove Review

ToeJam & Earl: Back in the Groove is a 1991-era experience with a fresh coat of 2019 paint. Now before you jump to conclusions (and to the conclusion of this review), this formula both boosts and hinders the game.

My first exposure to ToeJam and Earl was in the early 2000s. I was a new OG Xbox owner and before I asked my parents for new games for the system, I popped in a newly acquired Xbox Exhibition disk into my console. On that disk, the first game to draw my attention was ToeJam & Earl III: Mission to Earth. As a young teenager, I was enamored by the game’s California-cool aesthetic and the hip-hop attitudes of both ToeJam and Earl. Fast-forward to modern day, and we finally have a sequel to that title in ToeJam & Earl: Back in the Groove. This game, the fourth game in the series, is a modern re-imagining of the first game that was launched in 1991. This new iteration, which began its life as a Kickstarter, is the first title in the series to be released since TJ&E III in 2002. 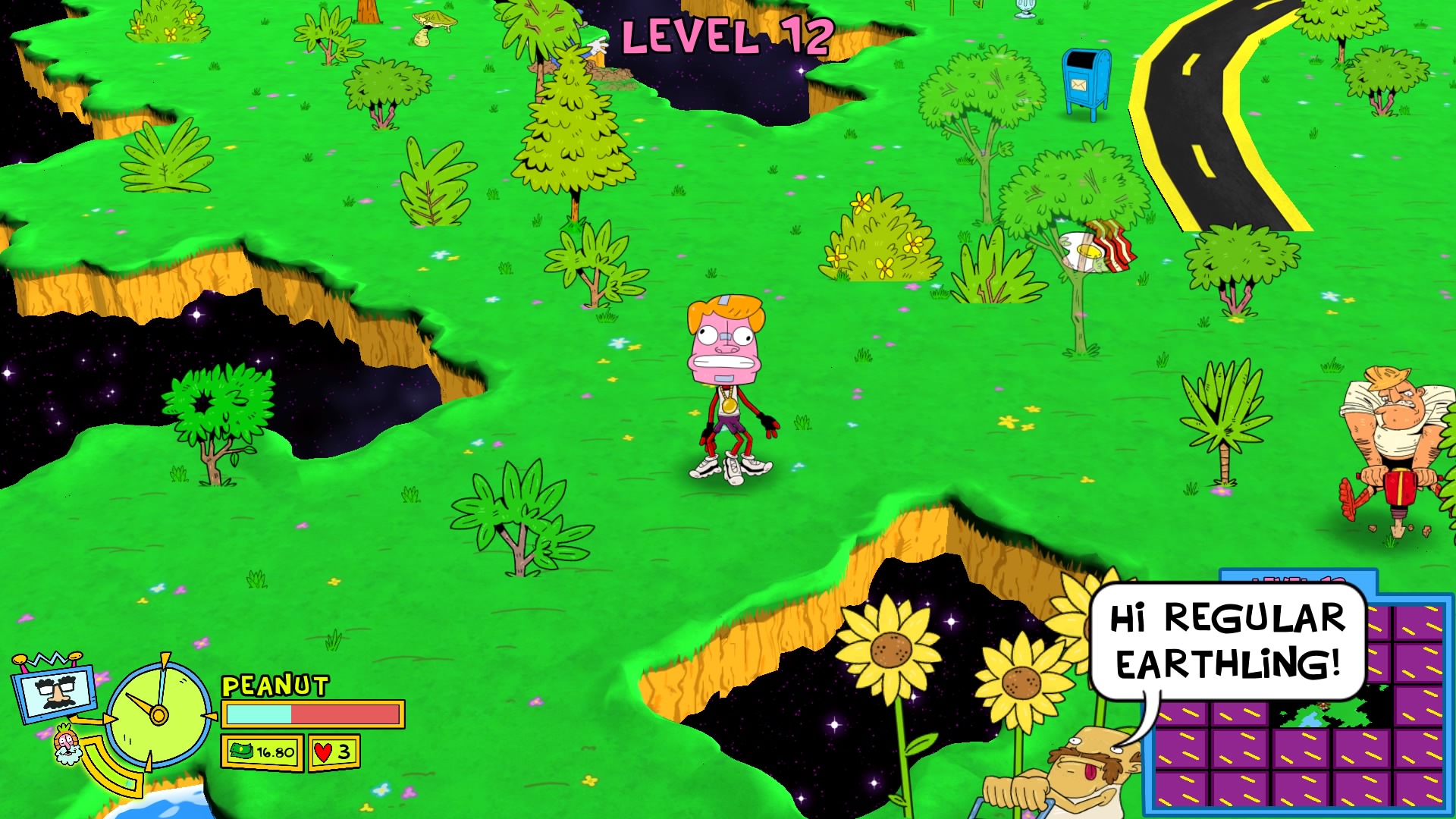 TJ&E: Back in the Groove is a rogue-like action adventure game with a very basic core gameplay loop that shares a lot of DNA with the first iteration in the series. In both games (this one and the Sega Genesis progenitor), your crew of space-traveling adventurers crash-lands on Earth after a big red button-related mishap. To escape, you must navigate funky and freaky obstacles/enemies while collecting the scattered piece of your spaceship. It’s a very simple story that facilitates a very fast entry into gameplay.

To kick off the game, you can choose between a starting set of characters including the titular ToeJam and Earl (each with their own set of stats and unique advantages). When you enter the game world for the first time, you will be awestruck by the game’s very unique art-style. Nathan Shorts, the game’s art lead, knocked it out of the park with the 90s alternative comic book vibe. The art style reminded me immediately of The Simpsons: Bart vs. the Space Mutants on the NES and Nickeldoeon’s KaBlam!. The animation of the flat almost papercraft-like characters is very well executed and the unique enemy designs felt like they belonged in a zine than a video game. The 50+ different enemy types in the game do a great job at making you smirk, shake your head and think twice about crossing them. 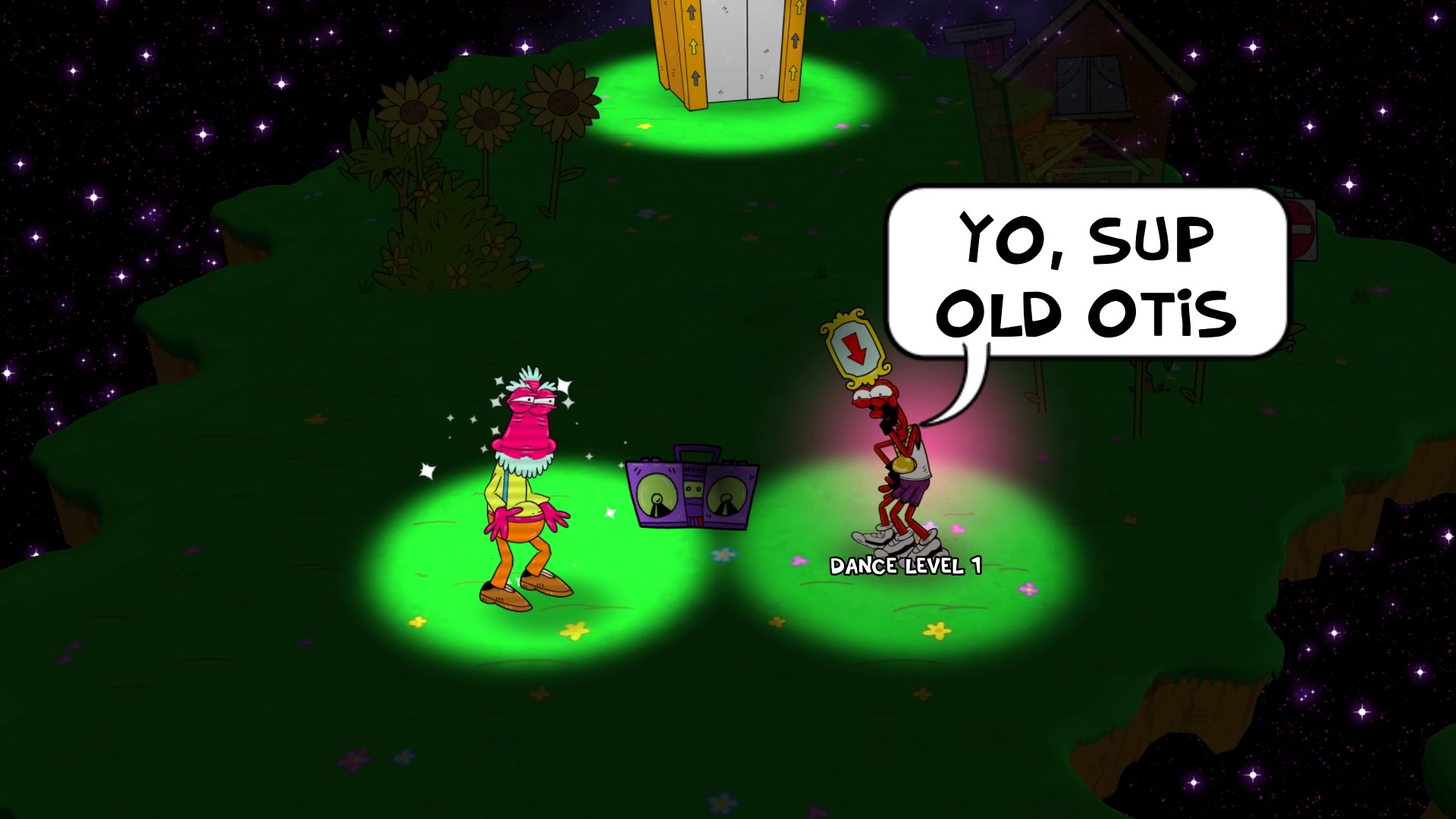 Playing the game, however, isn’t as impressive as looking at the game’s art design. Throughout, you will move from floor to progressively more difficult floor. Each of the game’s levels are randomly generated floating islands tied together through an elevator system. Some floors have shark-infested waters, sand-covered oases or even ice/snow, but most of them present a fairly standard size. As you progress, you will get to see a good variety of game content. This includes over 60 different gifts, some funky NPCs with their own respective powers and mini-games and a bonus HyperFunk Zone to explore. However, this content doesn’t mask the repetitive and somewhat tedious basic formula.

Arrive at a new unidentified floor, walk around, collect presents, use said presents to dispatch enemies and gain experience, level-up, find spaceship parts and move to the next floor. You “win” the game, when you collect all ten missing pieces of your spaceship to return home to Funkatron. There are a few spins on this basic formula in the form of different gameplay modes, but once you have seen the end-game once or twice, you will probably shelf this one. 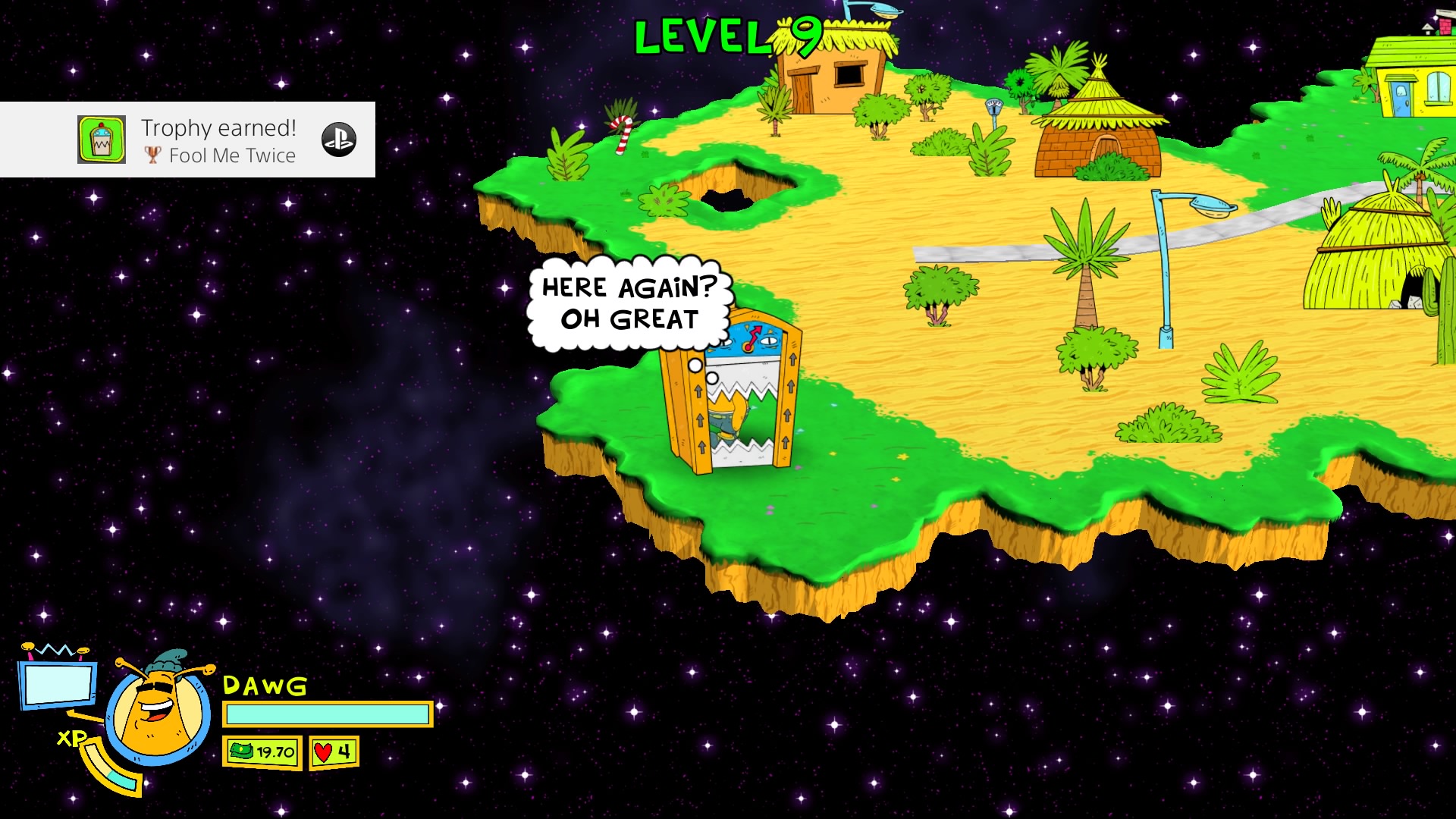 Controlling the game is also a bit challenging. Much like a twin-stick shooter from the 90s, your character can only move in one of eight directions. Take this stiff movement and add to it a deliberately slow movement speed (by default). Furthermore, your character does not have a basic attack. These gameplay choices, lifted from the original game, leads to an experience that feels stilted. When playing the game alone, you will spend a lot of your time shaking trees and other environmental objects to find money and gifts to defend yourself. By default, these items aren’t identified, so you will either need to rely on luck or identify them first. Add the game’s dated and cumbersome controls to the mix and your patience may run quickly thin. There are other small annoyances related to interacting with environmental elements. One example of this is that you must line yourself up perfectly with buttons and parking meters to interact with them like games from earlier eras.

The game also has a leveling system, but some of the stats didn’t really have a noticeable impact on the gameplay until they were maxed out or close to it. 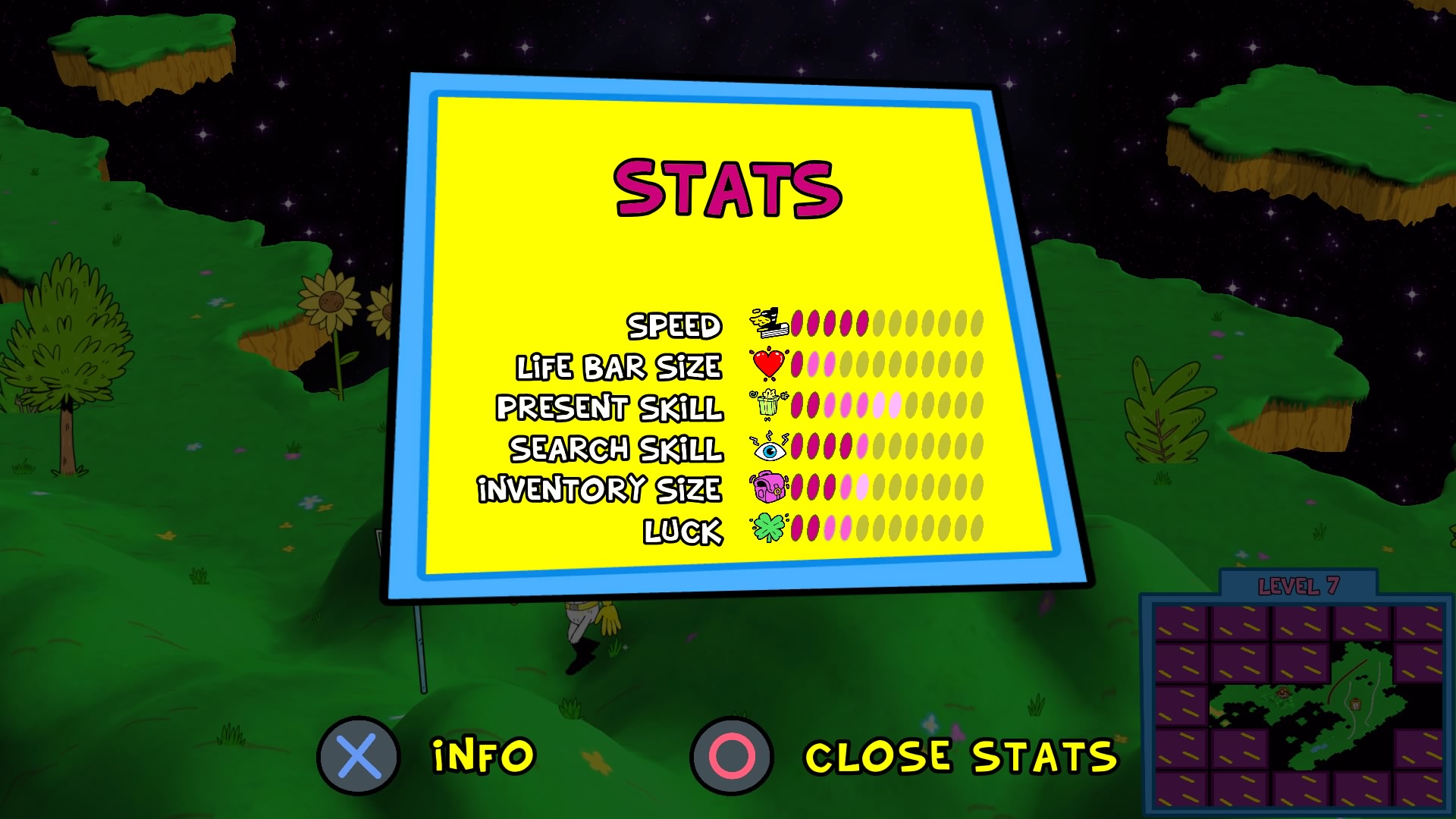 If you want to have more fun with the game, I implore you to find a friend to play with. Despite having more characters, hats and additional modes to unlock, you may find yourself exhausted with the game once you have had a “winning” run. Playing the game with one friend locally or with up to 3 other people online is the ideal way to play. The game’s immature humour, wacky enemies and simple gameplay is a lot of fun when you’re laughing with a friend (or three) and adding another player for a few sessions will extend your play time with this one.

Outside of the wonderful visuals, other elements of the game’s presentation were hit or miss. The sound effects in particular were quite grating, especially after hearing the same sound effect for the nth time. The music, composed by Cody Wright is a fun, bass-heavy affair. A lot of the tracks will sound samey to the average player, but at times you will surely be bobbing your head with the track. Especially the HyperFunk Zone theme, it’s super groovy. The soundtrack is a great throwback to the bass-heavy soundtracks on the Sega Genesis. I got some great Sonic Spinball and Dr. Robotnik’s Mean Bean Machine vibes while listening.

ToeJam & Earl: Back in the Groove is like returning to your favourite ’90s Saturday morning cartoon as a twenty-something adult. When you wrap yourself in that warm and fuzzy nostalgia blanket, you will initially feel really good. However, soon after the novelty has worn off, you will likely sink back into old habits and modern media. Don’t sleep on TJ&E: Back in the Groove; it’s fun with a partner, but offers slightly frustrating pacing/controls and limited replayability when experienced alone.

ToeJam & Earl: Back in the Groove is a good re-imagining of the original Sega Genesis classic. It’s fun for a while, but as a small step into modernity, some of the game’s particularities may not keep you coming back once you have beaten the game once or twice.