Mario Tennis Aces is a fighting game disguised as a tennis game and much like other games in that genre, most of the fun and value you will draw from the game will come down to how many of the game’s incredibly compelling multiplayer matches you’ll play.

Mario Tennis Aces is the eighth game in the Mario Tennis series. Appearing first on the Virtual Boy as Mario’s Tennis, the franchise has spawned installments on all Nintendo consoles from the Nintendo 64 onwards. The modern games have always had an excellent core – quick arcade style tennis action that is easy to pick up with some nuance to master. But the amount of content within each title varied wildly; the Game Boy Color and Game Boy Advance iterations had a full sport-RPG within them where their console brethren were often light on content in comparison (especially Mario Tennis: Ultra Smash for the Wii U).

Aces continues the trend of delivering a solid core by maintaining the best part of the Mario Tennis formula while tweaking fringe elements to improve the gameplay. Basic shots remain unchanged; topspin (orange) give you average control and speed while slices (blue) give you more control with less speed and flat shots (purple) propel the ball quickly, especially when returning non-charged or lob shots. In addition to these basic shots, lob and drop shots are also very simple to use. Contrarily, the big mechanical difference in this iteration is around special shots. Other games in the series have had their own version of these power moves, but Mario Tennis Aces adds nuance by adding an on-screen energy meter, a series first. 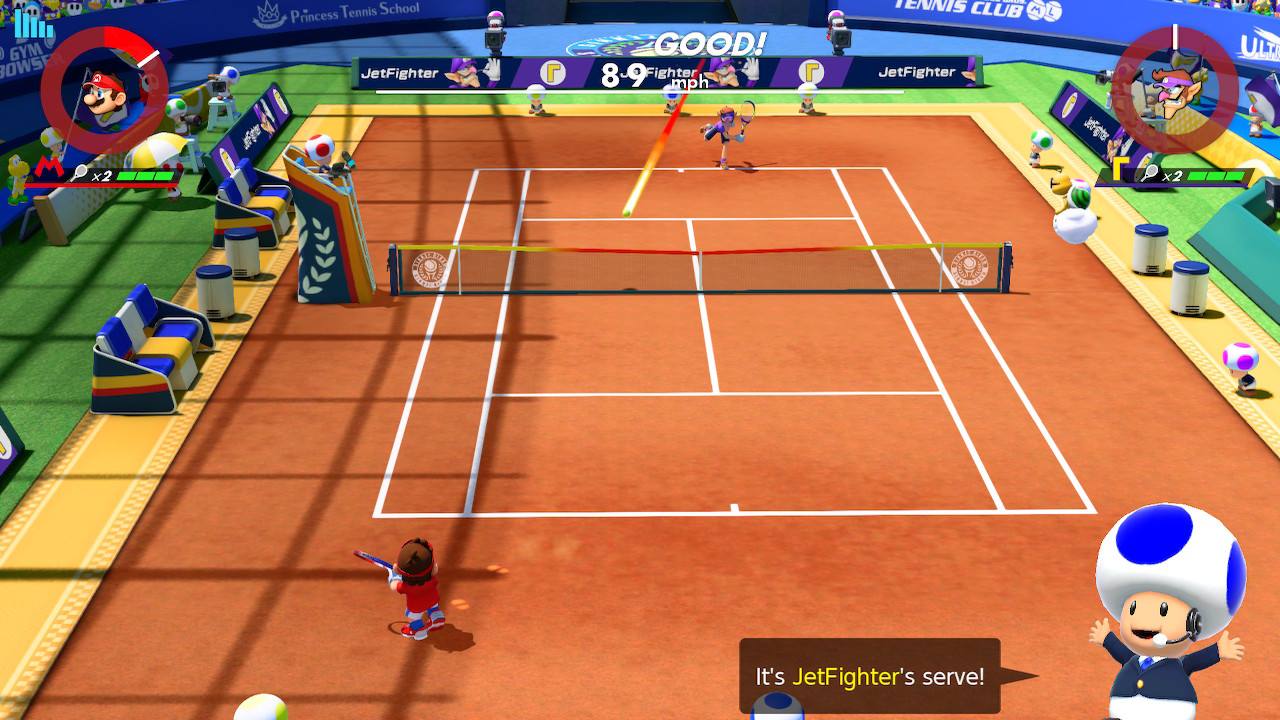 Mario Power Tennis (on the Gamecube) allowed characters to build up power shots that could be used offensively or defensively, but the power meter in Aces allows for even more moves. Your main power moves are the trick shots, zone shots and special shots. First, the trick shot is a defensive “save” that can either build meter or burn meter depending on your input timing. Next, the zone shot allows you to use your built-up energy to slow down time to easily get to a ball and let’s you jump-spike the ball when shot on a star indicator. Finally, your special shot (used when your meter is full) offers up a strong spike that’s hard to block by your opponent.

On top of these shots, your character also now has a health bar for your racket. If your character doesn’t block a zone shot or a special shot with perfect timing, your racket will become damaged or worse, will break. In other tennis titles, your character may have had a stamina or power bar, but to my knowledge this is the first time that a tennis player can be KO’d during a match because all of their rackets have broken.

There’s a lot of nuance in the gameplay, but it’s a lot to keep track of for new players. In multiplayer, you can opt for the game’s Simple Mode, but to engage with the game’s single player Adventure mode, you’ll need to learn the ropes.

To get better at the game, players can jump into the Adventure Mode. It is the first time that a console Mario Tennis game has had a single-player campaign but this mode leaves a lot to be desired. In this mode, Wario, Waluigi and Luigi become possessed by a godly tennis racket named Lucien. While battling this demonic inanimate object, you come into contact with a distant phantom guardian named Aster who explains that Lucien’s power has been stripped away and split into five separate Power Stones strewn across the land much like Dragon Ball’s spherical treasures. It’s definitely more story than I expected to see in a Mario Tennis title but it simply acts as a vehicle for an RPG-lite adventure mode. 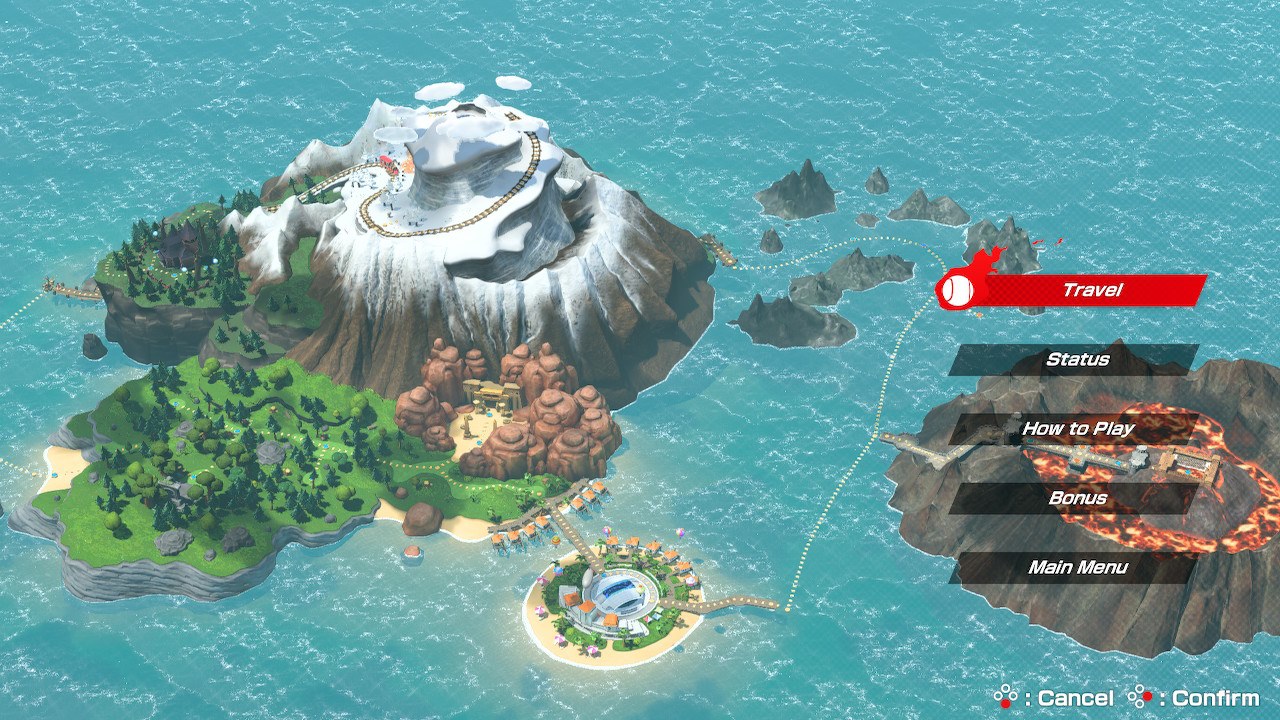 Throughout the course of your adventure, you’ll engage in matches against other characters (on both standard and gimmick stages), participate in tennis mini-games (like “keep away” or defeating Shy Guys on a train, for instance) and engage in tennis combat against screen-filling bosses. There is a decent variety in activities, but a lot of the campaign feels like filler with the exception of boss battles; these encounters are all unique and crafted with care. Each one is unique and most of them (with the exclusion of your final battle) are tough but fair.

Although the story mode is a good follow-up to the perfect training mode in the game, some elements of that mode make it feel rushed and thrown together. The way that your character grows and develops skills is arbitrary, there are frame rate issues in the single-player campaign’s overworld, there is no quick retry option after failing a challenge and the writing is very bland and functional. More frustratingly, you only have the option to play as Mario in this game’s campaign mode and after building him up across the different missions in the story, you don’t use him for a big piece of the game’s final sequence.

Moving past single-player, the biggest draw of this game is undoubtedly the multiplayer. Thankfully you have several options at your disposal in that respect. Personally, I spent most of my time with the online multiplayer tournament mode. In this mode, you are placed into a 32-player tournament each time that you enter the fray. At your leisure, you play games on the tournament bracket by facing a random online opponent who is at the same stage in the tournament as you. If you’ve beaten two opponents in your latest Bowser Jr. tournament, you’ll match with an opponent also looking for a Round 3 foe. Online matches are usually incredibly intense because of their brevity (1-set games) and once I got the hang of the power shots after 4 to 5 hours, it was incredibly fun. This was easily the highlight of Mario Tennis Aces for me.

While playing online, I did experience lag in some games. The game is incredibly fast-paced and even slight lag can ruin the experience. Thankfully, the game gives you a preview of your opponent’s connection quality before an online tournament match and gives you ten seconds to opt out of a game if you’re dissatisfied with your opponent’s connection speed. In about 5-10% of the game’s I played, the lag made the game unplayable and in another 10% of the games, there was enough connection instability to be a nuisance. 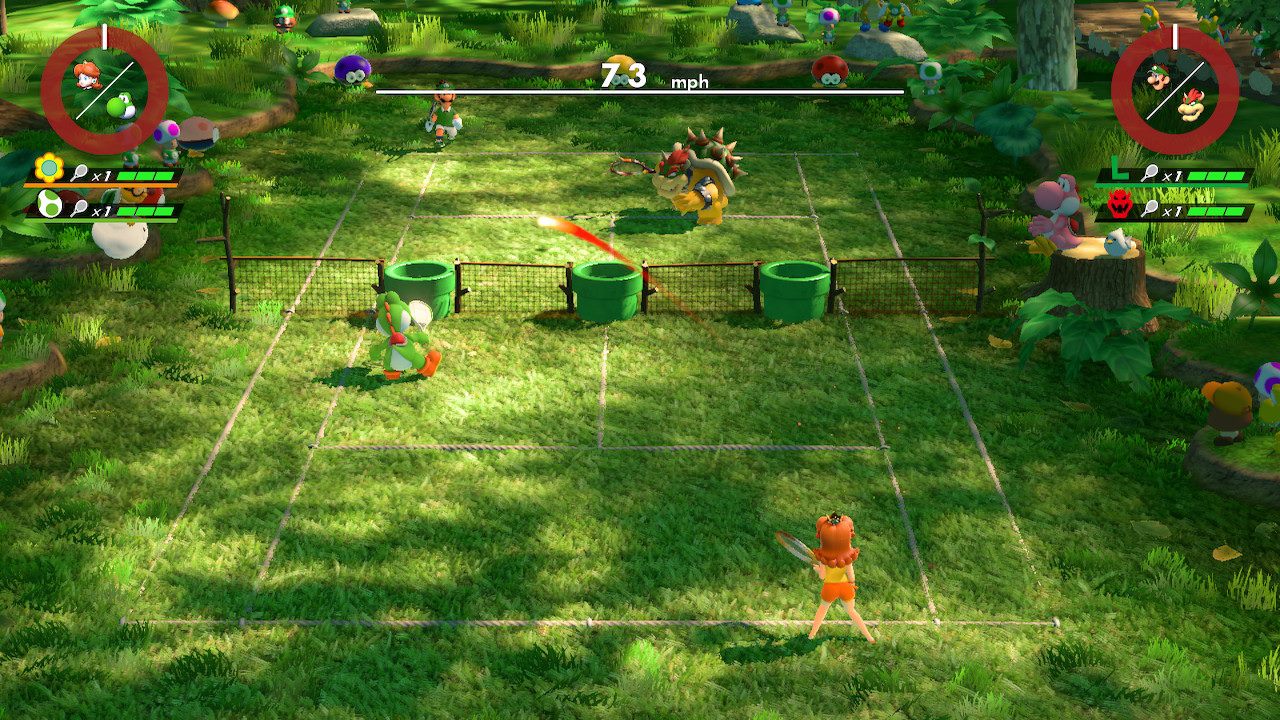 Outside of the Online Tournament mode, there is also local play for up to four players, local wireless play for multiple Switch consoles and online lobbies for unranked play. Much like a fighting game, however, the learning curve is deceivingly high for the standard mode. If you aren’t willing to coach a new player through the training mode and through a few easy matches, you may opt to the play the game’s Simple Mode. In this mode, all of the intricate fighting game-like elements are removed (special moves, health/power bars) and you can simply focus on tennis. The game also has a Wii Sports Tennis inspired Swing Mode (it’s bad) and a COM Tournament mode where you’ll play against AI opponents of increasing difficulty to capture the Mushroom Cup, Flower Cup and Star Cup. 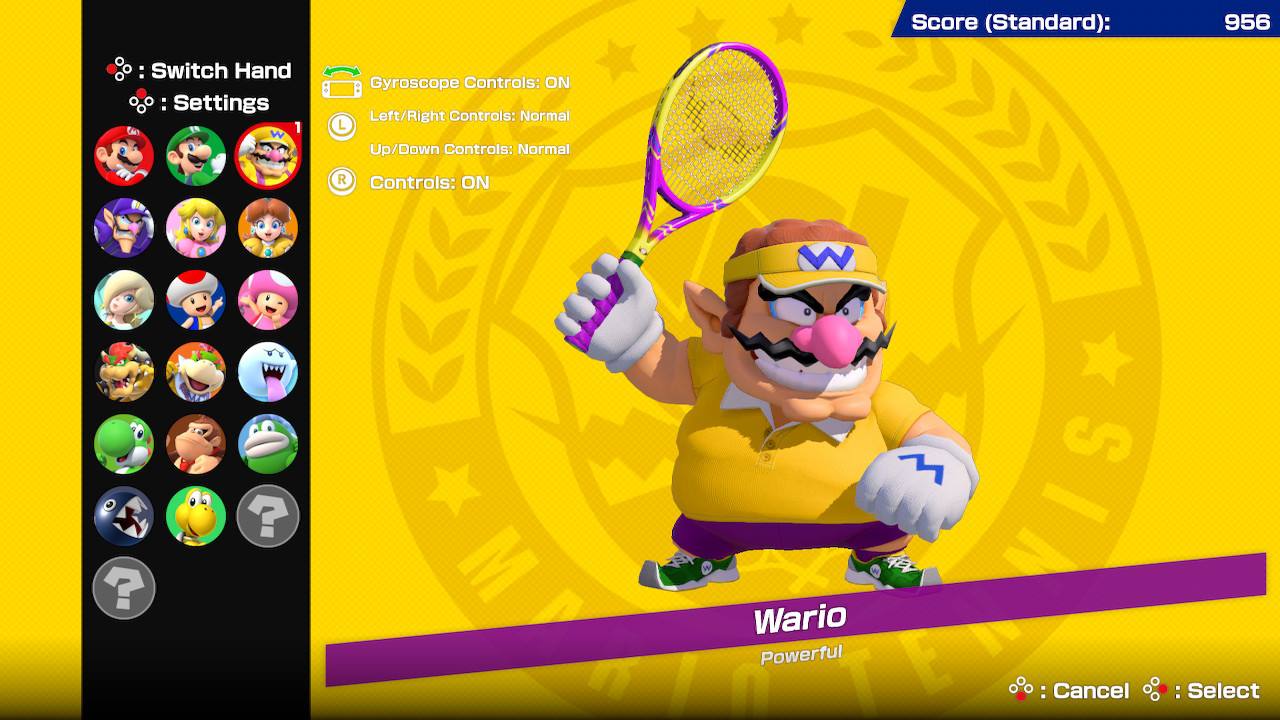 From a presentation standpoint, the game is completely serviceable. The courts and player models look good, but finer details were likely sacrificed in order to achieve a perfect frame rate. The sound design equally fades into the background.

After examining all of the game’s elements, Mario Tennis Aces‘ ultimate question remains: should I purchase this title? The game has a very solid core to it, but lacks single-player content. The game shoots for Mortal Kombat X with its value, but ends up landing closer to the full initial/stable release of Street Fighter V. If you don’t draw much enjoyment from playing the game online and/or don’t have a group of friends to play with on the same couch, there is very little here for you.

Mario Tennis Aces is fun and adds tons of depth to the core gameplay. However, if you do not draw enjoyment from online play or have friends to play with locally, there isn’t much for you here.

The review copy of this game was individually purchased by the reviewer. The game was reviewed at patch version 1.1.2.