It’s no secret that music holds a strange power. Music can be calming and soothing, helping to relax the mind and body, and it can be used to get the body ready for intense bouts of physical activity by being loud and tempestuous. Lost in Harmony took a different path and used music to enhance and project the emotions of the stories being told.

This re-release of a break out mobile title from 2016 not only tells one story but two, using a unique mix of line running and rhythm gaming to create an experience like none other. The soundtrack is expertly crafted with remixes of classical music scores being brought into the modern age. The graphics are equally something to behold, blending what looks like hand drawn characters and landscapes into a constantly moving animated painting to navigate through. 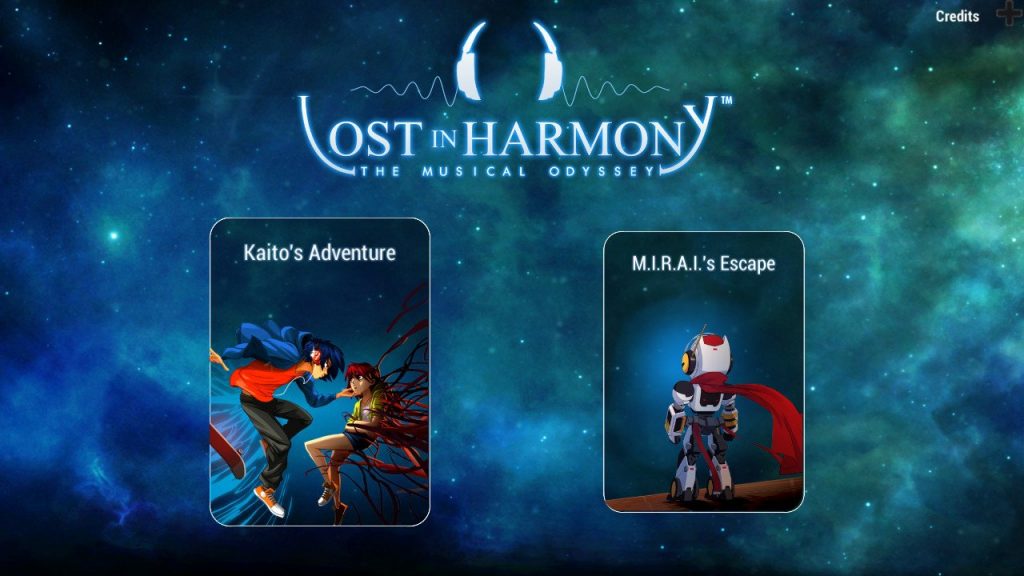 Game play in Lost in Harmony is relaxing and intense in equal measure. The levels are designed as a front view runner to musical scores, where the player essentially is focused on moving the character left or right. In each level you’ll have to dodge objects that come moving up the screen at the character from behind or jump over objects in front of the player to the beat of the music while following a glinting line of “stardust”. In addition to dodging the various objects, a more familiar looking play style is overlaid across the screen, requiring the player to press four buttons in time to the music.

The difficult part is balancing the rhythm controls while still ensuring that the character is able to dodge the incoming objects. Each level also contains 3 orbs that can be collected in order to maximize scores and also help to fill the completion meter. This meter sits in the top right corner of the screen, and slowly fills as you go through the level, collect stardust, and hit notes correctly during the button phase. Completion is measured in percentag; a number which will drop if you miss a note or get hit by something during the stage. Clearing a stage requires the player reaching a completion percent of at least 50. 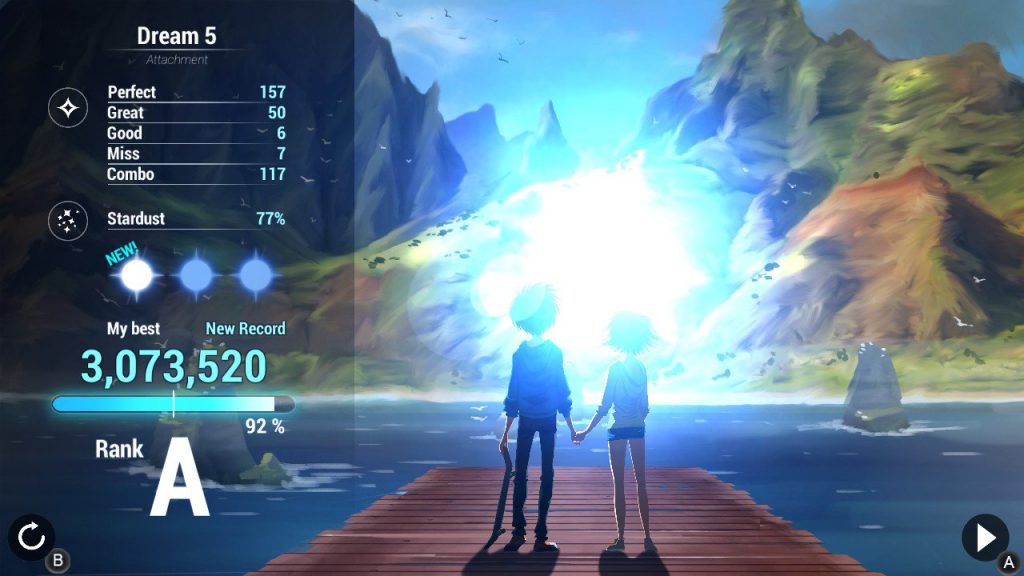 The graphics are something to behold in Lost in Harmony, and not for the reason one might expect from this type of game. The characters are wonderfully detailed and come with a few ways to customize their looks as you progress through the game. Each character even has multiple facial expressions and movements that are shown throughout the levels, and all of them are done with the same level of detail put into the base character look. The most impressive part is how the landscape in the background folds and changes during the levels. They look like hand painted masterpieces, moving in tandem with the beat of the song and fluctuating as the music sped up or reached a crescendo. You don’t spend your entire time running a straight line either; the roads bend, twist, and even have slopes to fight against as you make your way through wonderfully drawn levels. 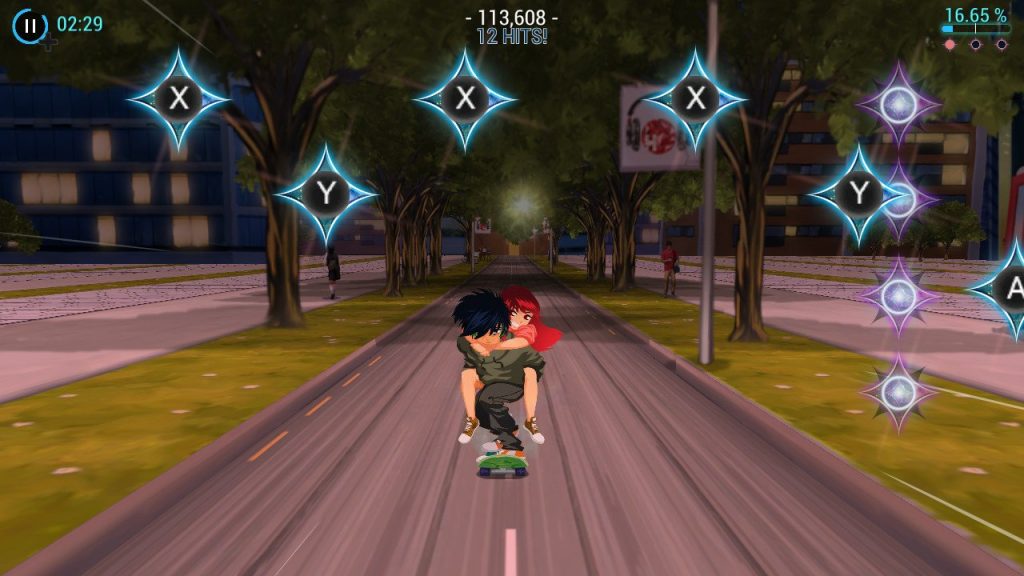 Lost in Harmony takes the player through two different story lines, where you’ll meet the game’s two protagnoists Kaito and M.I.R.A.I. One is of love and lost, while the other is of escape and acceptance. Both stories are told between levels in the form of text messages, which are then given new meaning during the next level with the help of music. During Kaito’s story line, he experiences the struggles of a close friend that may be a romantic interest Aya, that is enduring treatment for an illness through text messages on his phone. She expresses her pain, distrust, anger, and through it all he stays by her side helping her to be strong as shown during the levels as he carries her on his back.

Kaito’s story ends with Aya’s Mother thanking Kaito for everything he as done for her. The emotion felt during the culmination of the narrative is only impacted more by the musical score that is played after one of the most profound messages is sent to Kaito. The score starts loud and enraging making Kaito’s anger clear as he desperately skates away from the world. Then half way through, it slows down and becomes somber and calming giving this feeling of acceptance. The ability of Lost in Harmony to use the music to convey intense emotional shifts will not be lost on the player.

M.I.R.A.I’s story on the other hand — while still about acceptance — is on the other end of the spectrum. They are a robot with musical powers that escaped a research facility and is trying to find a way to not only be accepted as its own being, but to find a place to live in peace. During the level he is chased by military as he runs through earth’s landscapes all the while conversing with the creator, and the military, via something akin to emails. There are additionally news titles that can be viewed which relate to the prior levels and add further context to how earth is reacting to the mysterious robot running through the lands. At the start of the journey everyone is trying to convince M.I.R.A.I to return to the facility, but the strong willed robot refuses and continues to try and find his place in a new strange world. 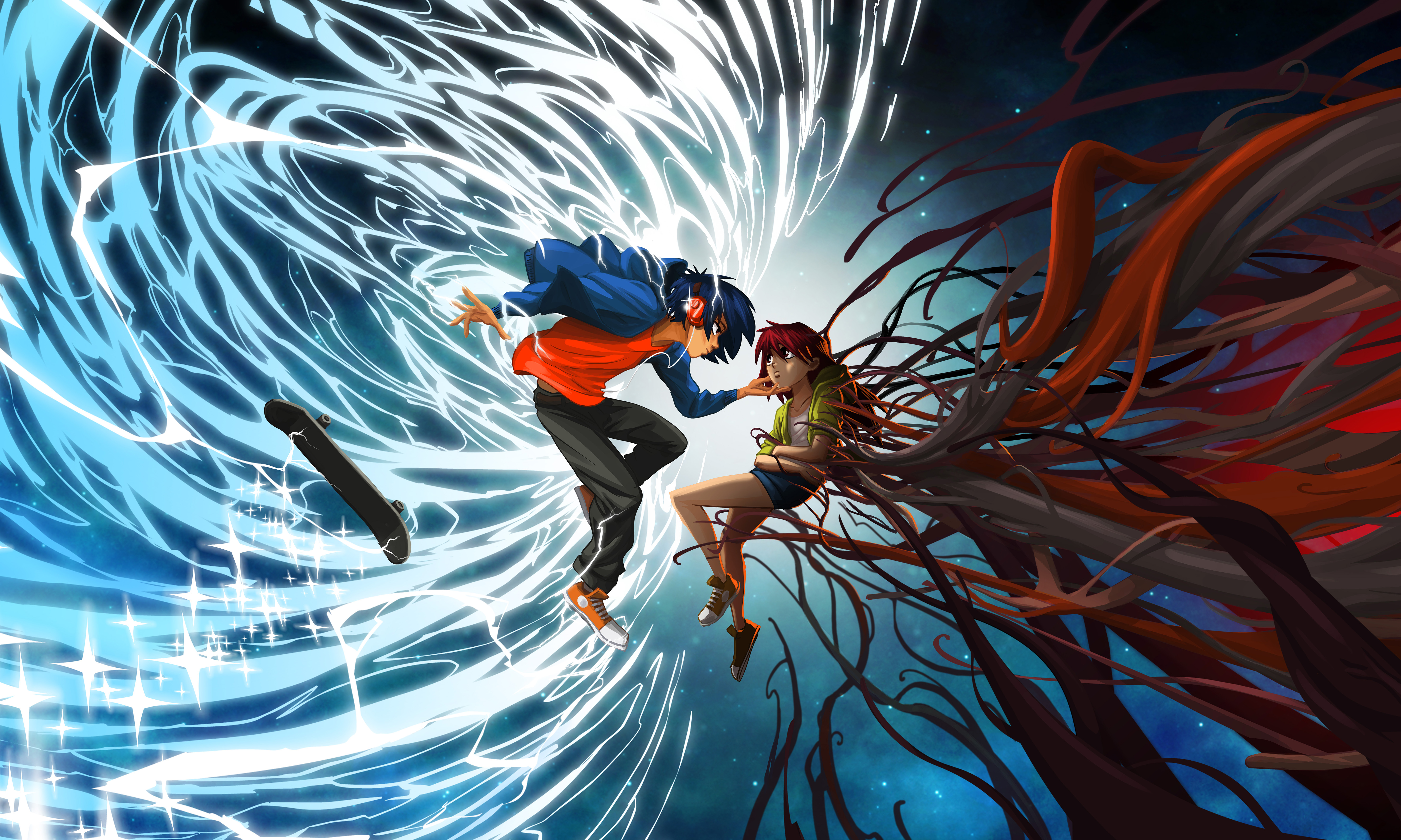 Overall Lost in Harmony is one of a kind. Being as it was ported over from a mobile game, it was brilliantly adapted to the consoles and plays as smooth as the mobile versions do. While the mobile versions are a little easier to play — especially during the button phase as it focuses on tapping the screen rather than following trails for a specific button — the actual movement of the character is much easier on the console. Thanks to the unique fluid gameplay, as well as the wonderfully crafted soundtrack and story and affordable price point, Lost in Harmony is an absolute must for Rhythm game fans, and highly recommended overall.

Lost in Harmony is an aptly named indie title that will lead you through an emotional journey with unique game play and deep story telling through music.