I will always have a soft spot in my heart for indie games that stick with the tried and true methods of classic genres rather than use more modern methods of game development. The Chronicles of Nyanya instantly hit that mark for me. Not only does the game play like the JRPGs of the late 1990s/early 2000s, but it was developed utilizing RPGMaker MV, which is a somewhat rare occurrence. Personally I was very intrigued about the prospect of a quality game which was made using software that, until the most recent edition, required itself to play anything developed within.

Oh right, and the entire cast of the game are humanoid cats, so there’s that. 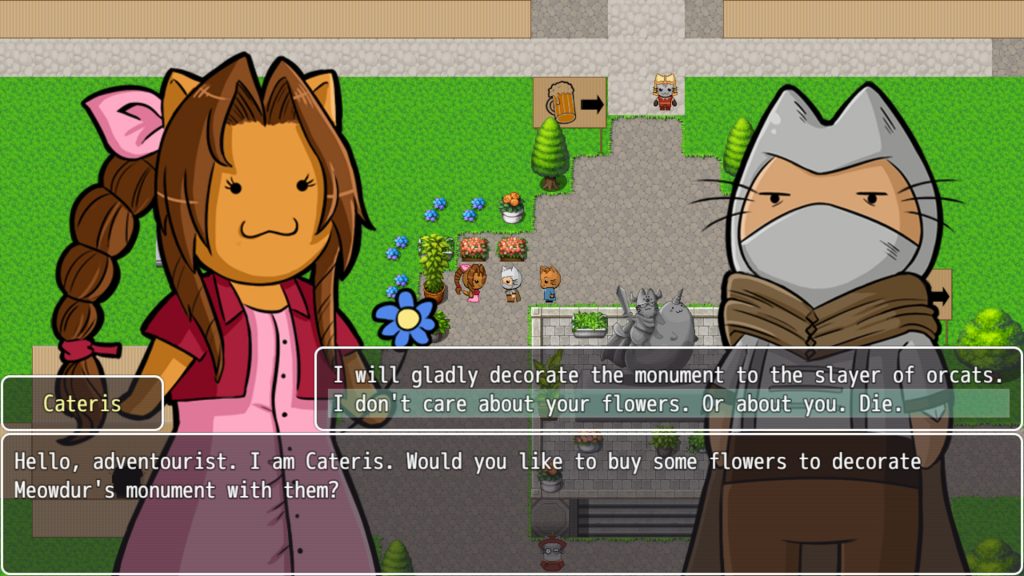 Starting a new game gives you an option to begin with the tutorial Prologue or advance right to Chapter One. I would recommend definitely starting with the Prologue if you haven’t played before, because besides introducing you to some of the mechanics it sets the stage for the entire story. The Prologue was rather short, but it was well done and set up the back story of the main cat, Catair; A country cat turned meowsassin (get ready for the cat puns). The section also served as a good tutorial on fighting and movement in the game and an overall introduction to life in Nyanya.

Chapter One picks up somewhere after the end of the Prologue. Catair is peacefully meditating after becoming part of Order of the Moving Red Dot, a group of meowsassins. Catair gets called in front of the Order’s master and told that she will be undergoing a test for a client who was looking for a new party member. Enter Francat, the Clericat from Great Bowl of Goodness, which is portrayed as the main Cat religion on Nyanya. After some silly dialogue and a refresher in combat systems, you become part of Francat’s party and head off to have an “Adventour” with them.

Your first quest is to find the missing members of a local publication, which is done by scouting around your somewhat immediate vicinity. After collecting some suspicious clues from the publication building, the party comes to the conclusion that “Cathulu” has taken the missing cats and that nothing else can be done about the problem. Typical feline optimism, am I right? Catair, being the inquisitive cat that she is vows to find the members — convinced that the whole thing was staged anyway — and goes off to search the rest of the building that the kitty journalists worked in. 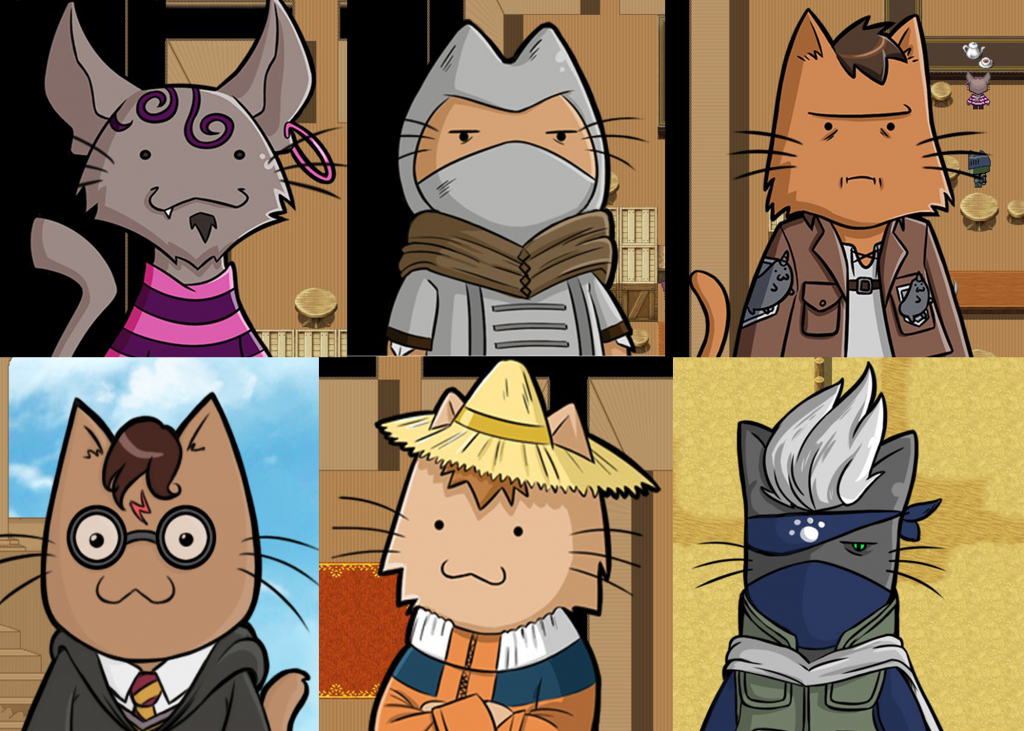 The battle system is a side-view, turned based style typical of classic RPG combat. It functions very similarly to many of the older JRPGs, and really reminded me of the original Final Fantasy games in particular. Each character has his/her basic attack, as well as magic or techniques and an ability unique to the character, and you target enemies by selecting them after you pick your action. Characters all have a class, be it Meowsassin like Catair, or Meowmage and Clericat. The classes function largely how you would expect them to; the Meowsassin handles DPS, while the Meowmage attack with spells and the Clericat buffs and heals.

Much like any good RPG, there are status effects in the game which can hinder characters’ ability to fight. Poison, Blind, and Provocation are just some of the numerous debuffs present in the game, each which requires you to think different; or get the Clericat to heal. Enemies vary from other meowsassins and various other types of anthropomorphic cats — including OrcCats — as well as Chocolate muffins and pesky Furniture. All things that any good cat would want to do away with in the most violent way possible.

The graphics in The Chronicles of Nyanya are smooth and colorful, but do a great job retaining the classic feel of the 32bit-RPG world. The use of textures was well done, making the houses look like cardboard, and even the litter boxes and kibble filled food bowls detailed clearly. The soundtrack is also very well done, with the music playing along delightfully to the current narrative or situation. The town music is light and airy, giving off a relaxing vibe while still keeping you engaged, while the battle music was tempestuous and bold, really making the battle feel dangerous and exciting. 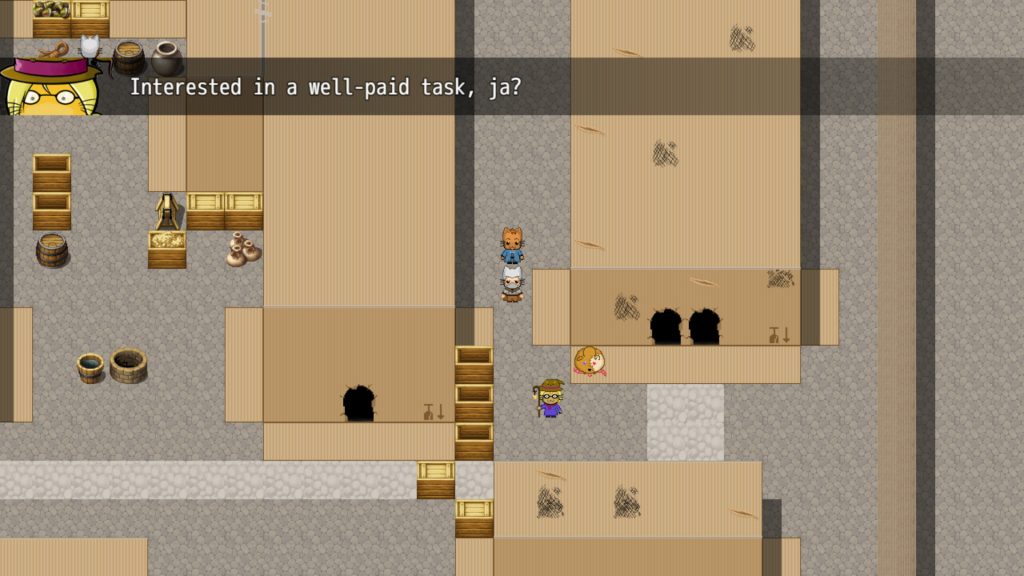 Decisions can be made during conversations, which is a neat feature although most of them only seem to change the dialogue that follows; a few times it lead to fights or a small amount of gold or experience. While there was nothing game changing in this feature of The Chronicles of Nyanya, being able to decide how to respond was a welcomed mechanic that made the game feel more like a modern-day RPG.

One of my favorite aspects of the game was all the look-alike characters from other franchises. Not only does Catair resemble a similarly named character from Assassin’s Creed, but homages to Naturo, Attack on Titan, Alice in Wonderland, Cthulhu, and Harry Potter all feature fairly prominently throughout the first two chapters of the game, each represented by a punny feline version of themselves. Not only do they resemble the characters, but the developers did a great job of bringing through the personality traits of the referenced characters, making me chuckle a few times during the dialogues.

Overall as an indie game with 20+ hours of content, a simple nostalgic game style, and a world full of cat puns, The Chronicles of Nyanya is well done. The developers put great care into imagining how the world would look through a cat’s eyes, all well maintaining a familiar human view. The old style controls and battle system mixed with a more modern, clean look was a refreshing experience as a JRPG fan. I’m quite happy with the time spent on playing this wonderful addition to the indie scene.

A furtastic adventour full of memes purrfectly pulls right at the yarn ball strings of nostalgia.

(Review was based off an incomplete version of the game)