If conventions are a buffet table upon which to walk away from with grinning bloated sweating greasy bodies, then Antihero left me wistfully thinking just how much would more of it might be in my local supermarket. I had a taster at EGX Rezzed earlier in the year and, while I could name some spices that’d really give it flair, it was the sort of purified delight of design you’d find in a board game. So, I would honestly say that I have been looking forward to seeing the game’s completed form, and while it functions solidly and does provide a unique experience that I find myself cherishing the efforts of, Antihero unfortunately feels like more of a distraction than a cause of strategic musing.

Antihero is a turn-based strategy game where two gangs of thieves duke it out for control of territory the only way they know how; the first gang that completes a set amount of objectives, wins. To help you achieve this nefarious goal, you’re given a thief that can perform two actions every turn, chosen from a roster of options. You can dissipate some of the Victorian smog on the streets or on a block of houses, you can burgle houses for delicious coins or lanterns, you can even (eventually) get the opportunity to steal some health from some foolish, wandering ruffian.

This opportunity comes in the form of a skill-tree system, and all you have to do is remember the five “ery”s. There’s Stabbery for your violent ends, Sneakery if you find your thief’s two-actions-per-turn limitation too paltry and want to raise that cap to five, and Skullduggery (they spelt it with two “l”s, please don’t get mad at me) for everything else. If you’re swarming in lanterns you can even choose Bribery as your victory condition, with each one bought increasing the cost for subsequent purchases for both players. If you can’t buy anything with lanterns, fear not, as you can use Charity to sacrifice use of the skill-tree for the turn in exchange for 2 lanterns or 4 coins. Sorry, I guess it was naughty for me to say it was five “ery”s, but you can imagine it being spelt “Chartery” like a slurred Oxford/Cambridge accent if you’d like?

As you unlock portions of the tree, you also unlock more minions to recruit with coins. Three of these include Gangs (who can evict from properties or deal damage to anyone on the streets while levelling up), Thugs (either give Gangs more health or block a tile from being moved through by the opposition) and Saboteurs (can trap properties or reveal blocks of properties). However, the root of your operations will be your Urchin, able to activate buildings by having one inside or unlocking the secondary ability by having three infiltrate. This minion manipulation serves as the meat of the game, and is a style of gameplay often called “Worker Placement” in the board gaming circuit.

That said, rather than your workers being placed to trigger a variety of tactics, everything shares a somewhat unfortunate common root: coins and lanterns. To nail your winning objectives, you’ll need gangs for assassinations and urchins for churches, both of which come from coins, with bribes coming from lanterns. It does mean that if an opponent can shut you down from getting one or both resources, they’ll use how much they are ahead to further deprive you. This in turn leads to a snowballing effect due to how easy it is to lock the opposition out. This additionally has the coincidental side-effect of leading both players to take incredibly similar early turns, as both sides will be grasping for coins and lanterns.

However, that isn’t to say every player has equal opportunity of where to place their workers. One of the two main ways that Antihero stays fresh from game to game, especially in the face of not being able to pick different sides/teams with mechanical differences, is randomly generated maps. This means you can end up with a couple of estates that are unreliable single-shot currency boons, or loaded with a bank to reap cash from and an orphanage to turn urchins into cheap eviction labour. Matches are relatively short, and you’ll always get a lantern output opportunity at the start, so this randomness isn’t a colossal deal breaker as matches are won/lost fast. It’s just important to note that often one person will end up in a more advantageous position than the other. 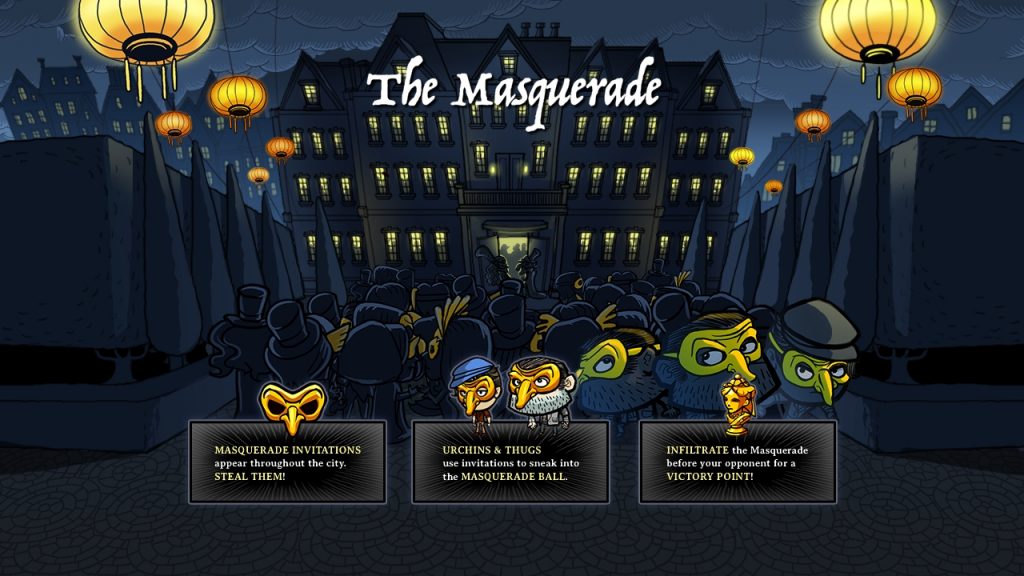 Apart from randomly generated maps, it is pretty impressive how customizable the multiplayer settings are. Personally, I love my rules to stay vanilla due to a crippling fear of upsetting the balance. However, perhaps you want to alter the starting coin/lantern count? Maybe turn off the Bribe or Blackmail (3 urchins in a Church) victory condition? You can even change the cost of some henchmen or even starting health of thugs/gangs. There are also four multiplayer modes that via the objective system can somewhat mix up gameplay, tactics and pacing. While I could have done with also being able to tweak what specific properties there will be in a game through which to invest young children into, like the Victorian era did, there is still a lovely array of options to toy with.

I would also like to give a high-five shout out to the local and online multiplayer options. For the local mode, you have the classic hot-seat choice to contend against your friends with. For online you have the known-and-loved play-live style, as well as a “Casual Mode”. In Casual Mode you simply log back into the game whenever another player has taken their turn, mulling over your choices as long as you wish. Despite being turn-based (which can be easier to net-code for compared to real time gameplay) I think it is still an achievement to see an online mode that functions this highly, and through trying the Casual Mode it seems to be working just fine. However, I admit that I haven’t managed to finish a match through it yet, but I don’t blame Antihero for us being slow.

Finally, there is the campaign mode. These are 10 missions that will take you through not only the basics, but also provide a diverse array of challenges that provoke different gameplay approaches. While I had expected to just be dragged through narrative driven Skirmishes, instead I was offered objectives that are distinct to the mode. While sometimes maps will be specifically designed around a particular set up, other objectives’ demands can be made that you wouldn’t find outside of the campaign mode. Not only did it work as a lovely tutorial, but in addition it was genuinely enjoyable beyond the tutorial stages. However, it is still clear Antihero is focused on multiplayer and that the campaign is more akin to garnish than the meat of the title. 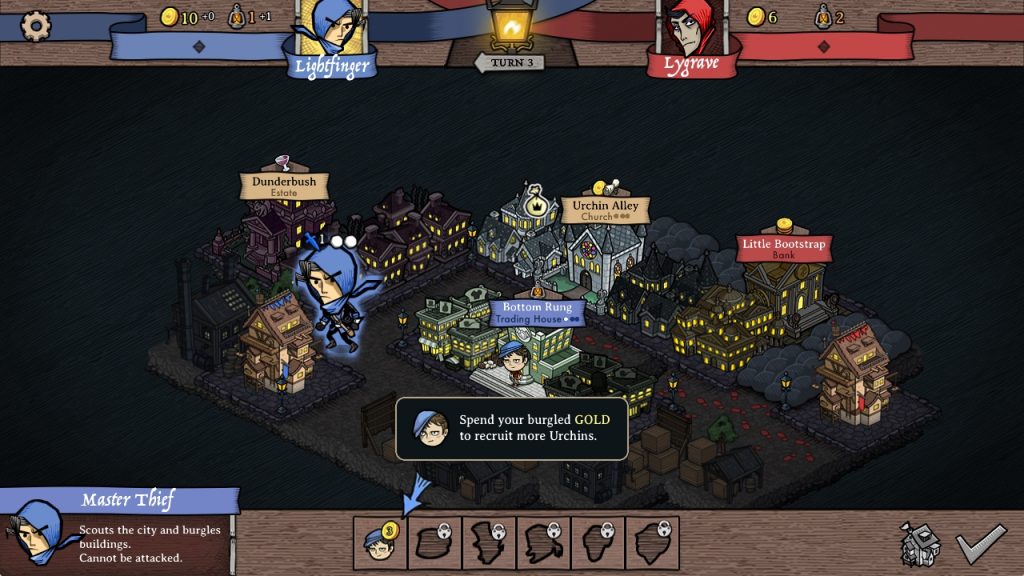 The final score for Antihero is a 6/10. To me the beauty of a strategy game comes from how many possibilities lie in front of you. In a game of chess, there are 20 potential moves white can make on their first turn. In contrast, unless the rules are severely tweaked, there is only one or two “correct” moves. Every time I played Antihero I didn’t get the vision of “what if I tried this strategy”, “perhaps I’ll give this a try instead” or “wouldn’t it be cool to try this mode” like I do with other strategy titles like Ascension (the deck building title), Plague Inc or FTL. Even with the modes changed, it feels like the core tactics remain incredibly similar, with only randomly generated maps tweaking the specific move-by-move tactics.

That said, Antihero could still charm those with a board gaming affinity. It has a nice aesthetic cartoony style, a lovely campaign and a unique concept. It also has the boon of being pretty cheap. On the other hand, if you want a strategy game that gives you a field of potential playing styles, where if one door is closed to you then you still have options to wiggle yourself free with, then Antihero may be found wanting. Especially on the thuggish streets ruled by the Gangs of PC Strategy Games (I’m sorry), Antihero feels more like a parlour trick than a real gambit for a slice of profit. It is a lovely looking parlour trick, and one to be celebrated, but simply one without enough schemes to survive the vicious game being played on these metaphorical strategy game streets.

A PC review copy was obtained for this review.

Kailan May
Kailan May has a BSc in Sociology with Psychology from Teesside University, and holds 3 years of doing reviews, previews, interviews, news for various websites under their belt. To make the content for Scholarly Gamers, I bang all the buttons and wiggle the sticks.

Ubisoft’s E3 Conference was One of Tributes