The Legend of Zelda: Breath of the Wild – Master Trials Review

After beating The Legend of Zelda: Breath of the Wild months ago with my wife, we’ve since picked it up every once in awhile to continue chipping away at missing Shrine Quests, and the few locations that we’d yet to pin on our Sheikah Slate. While the world never seems to grow dull, we had been yearning for a new excuse to return to Hyrule.

The release of the Master Trials DLC this past week gave us the perfect reason to delve back into the deepest caverns and climb the tallest cliffs of Hyrule, presenting gamers with a handful of new side quests to obtain heroic memorabilia from the series’ days of yore, the challenging Master Trials themselves, and perhaps most excitingly, a new hard mode with an entirely separate save slot. The Master Trials are quite possibly the perfect combination of new challenges and old memories.

For what is considered to be a fairly small DLC add-on for the game — as Nintendo prepares to release the Champion’s Ballad storyline later this year — the Master Trials have quite an impressive offering for half of a $20 season pass. For my wife and I who are looking to complete our initial save file, we opted to get right to treasure-hunting for some of the items that had helped to define some of our experiences with the previous iterations of the series.

While most of the new items offer little more than a small attribute bonus, the nostalgia invoked by unearthing a chest that contained Majora’s Mask, or the aesthetic joy of wearing Midna’s helmet and bringing a piece of the Twilight Princess along with you through your new journey, were reward in themselves. There is also something to be said for playing the game entirely wearing the Phantom Armor from The Phantom Hourglass, but my wife was a much bigger fan of running around like Tingle and scaring villagers. 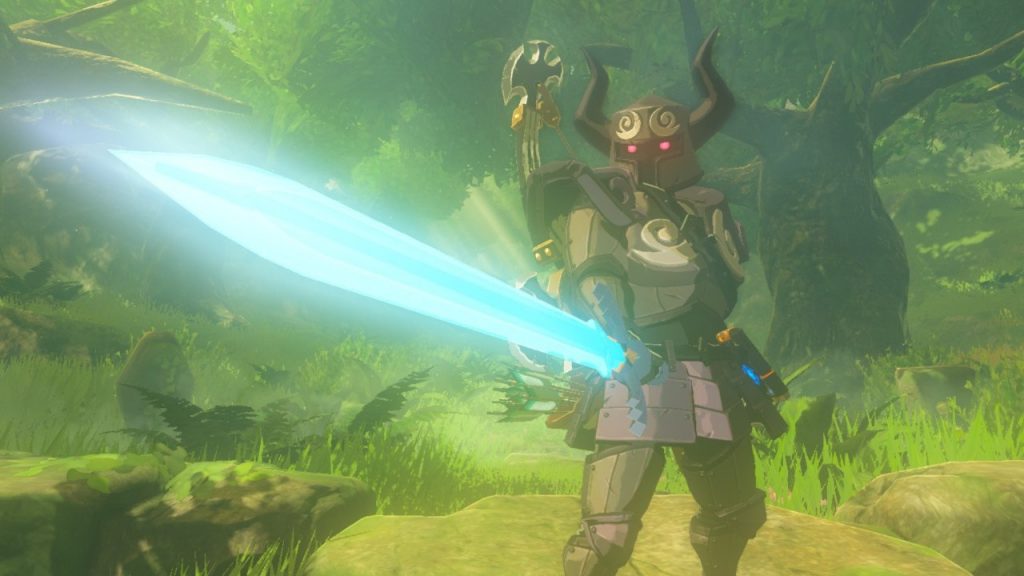 These items are obtained through completing sidequests which have riddles to solve, similar to locating some of the Shrine Quests in the base game. Once you obtain Misko’s EX Journal, the pages direct you across the reaches of Hyrule, although admittedly perhaps not as far-reaching as they could have been. You’ll spend a lot of time in Hyrule Field digging through Ruins, but each item’s location is tied into the game they came from. Not in any overt way, but in a geographical nod to those who played previous games.

Through these same quests, players can also find the Korok Mask to assist them on their way to finding all of those tricky little seeds, and perhaps most helpful: the Travel Medallion. This item allows Link to place a ‘portable shrine’ in a sense, which allows for quick travel back to anywhere you’ve dropped the trinket. This can be especially useful for areas with a dearth of Shrines, or if you are grinding out a particular item or area.

It’s hard to say where the ‘core’ of the DLC lies with the small bundle of varied add-ons, but arguably one could say it’s contained within the gauntlet-like Master Trials, named for their connection to the legendary sword. The Master Trials borrow from the game’s Eventide Island, which stripped players of their items and forced them to undergo a series of trials. 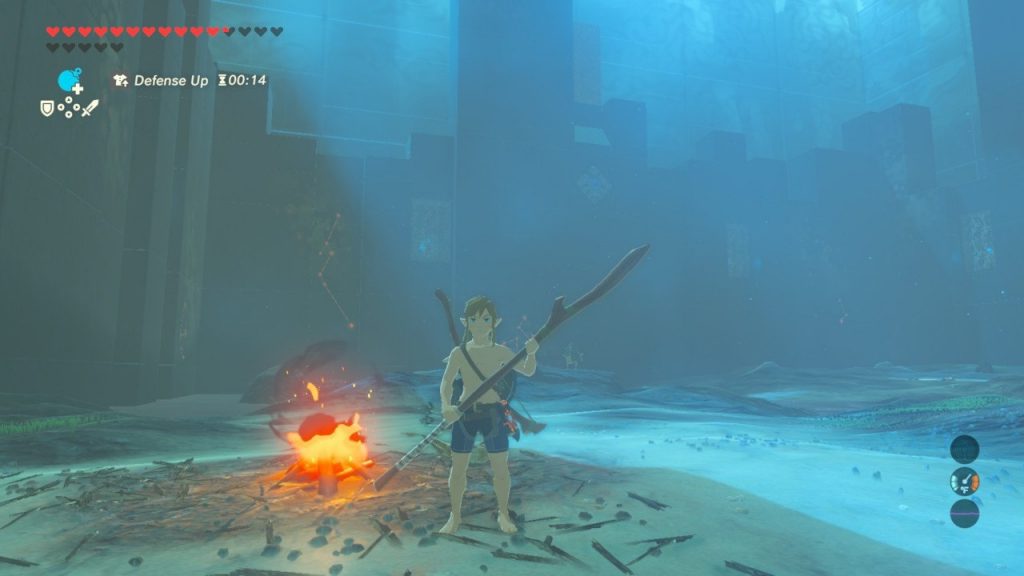 The Master Trials are kind of like the aforementioned island shrine, if the experiences that you had sequestered on that rock were amplified and thrown at you with a vengeance en masse. Plus lightning.

All-in-all there are 54 floors in the Master Trials, separated into three tiers which get exceedingly more difficult as you make your through the gauntlet. You start each of the tiers with no equipment, no food, and none of the abilities that you have gained from the Divine Beasts. As you pick up your first stick, and prepare to face the initial onslaught of Stalkoblins, you begin to understand what the Master Trials are all about.

In each tier, areas are separated by their environment, which begins as a fairly benign shrine dungeon and progresses towards pits of lava, endless thunderstorms, and eternal darkness. Enemies will also get progressively more difficult, ranging from single challenging enemies like a Lynel or Hinok, to a swarm of Guardians with their eyes on you. These areas are broken up every 5 floors with a small rest area, allowing you to gather some ingredients and cook food, or just cry into your Sheikah Slate for a while.

After briefly getting you accustomed to new areas, each floor will force you to utilize all of the tricks that you have learned over your playthrough, bending and igniting the environment with Sheikah Slate abilities, and using the elements to your advantage wherever possible. The trials borrow a lot in their substance from the survival genre, even if the gameplay is far from it. This was the first time I felt genuinely scared playing Breath of the Wild, knowing that permadeath was around every corner. 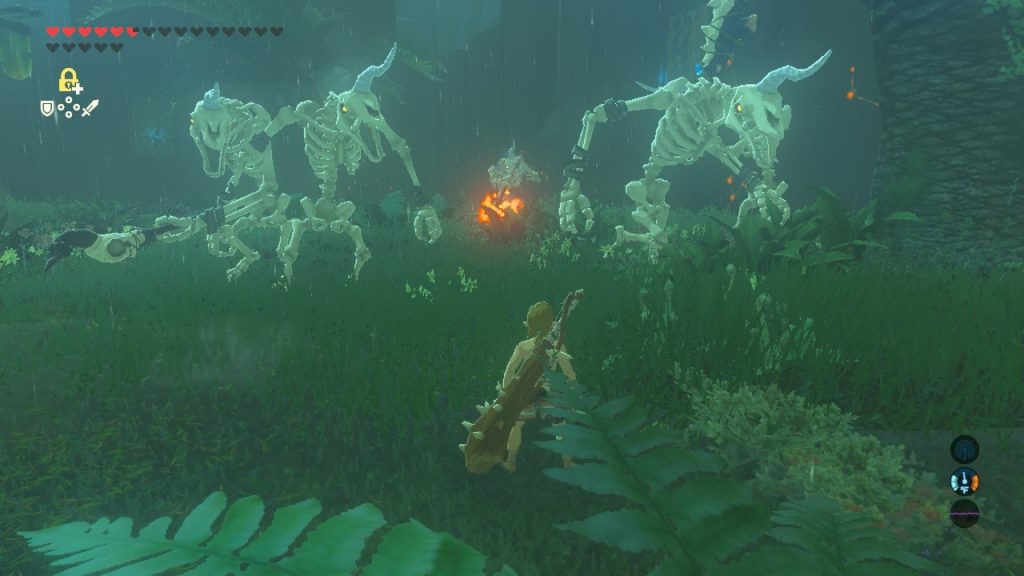 It’s possibly some of the most fun that I’ve had playing Breath of the Wild, and easily some of the hardest challenges I’ve encountered. This is why after conquering the Master Trials, it only made sense to turn my attention to Master Mode, The Legend of Zelda’s new game mode meant to test even the most skilled of players. In Master Mode, you’ll be relegated to fewer save slots, introduced to leveled up baddies, and forced to cope with enemy health regeneration. I haven’t made it very far into Master Mode yet, but once you’ve died 20 minutes into a game from some of the first Moblins you’ve fought, you check your overconfidence at the Shrine of Resurrection.

The best thing that the Master Trials DLC did for my wife and I was entice us back into the world that we’d fallen in love with. While there are always reasons to go back to Hyrule, the Master Trials invited us to experience new challenges which tested our skills, and nostalgia that hearkened us back to afternoons spent together with Midna, Tetra, and the magical lands of Termina.

If you’re still playing Breath of the Wild, haven’t picked it up since you beat Calamity Ganon, or have been on the fence because of your affinity for earlier titles, the Master Trials are for you.

Possibly some of the best DLC for its price-point in a long time.