Another week, another Fact Sheet Friday from GIANTS Software! In keeping with tradition, the developer has released another set of fact sheets providing detailed information on some of the equipment coming to Farming Simulator 19 when it releases on November 20.

In case you’ve missed any of the previous fact sheets, you can find them all here:

This week’s fact sheets show us an even bigger forage harvester, a new John Deere, and even more options for transporting the various products from our farms! 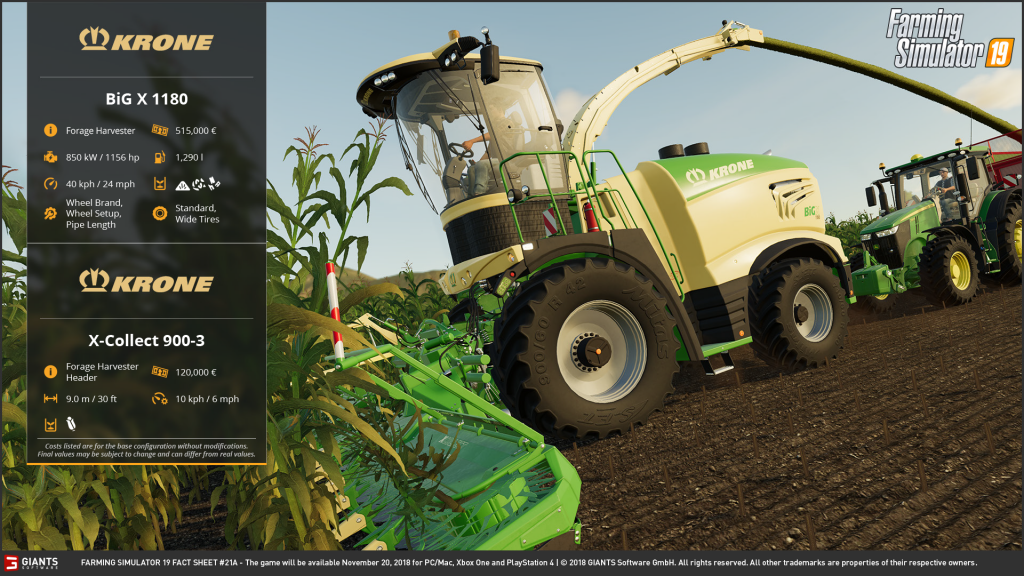 The Krone BiG X series has been around the Farming Simulator series for quite a while now, and it’s no surprise to see it back once again. Typically the largest available forage harvester, the BiG X 1180 can quickly turn a large field of corn into chaff for use as silage. I would assume that there will also be a range of headers available for this machine, so that players can use it to harvest corn or grass, depending on what they choose.

Unique this time around is the option for wide tires on the 1180, as well as the ability to choose the pipe length for the harvester. I’m unsure what practical impact a longer (or shorter) pipe will have on its abilities – perhaps it will have a larger range when it comes to how far away the wagon it’s filling can be, or perhaps it will be purely cosmetic. In any case, I’m curious to test this out once the game is released!

The X-Collect 900-3 is the standard corn header for this harvester, and with a 9.0 metre (30 foot) width it provides players with a wide swath to make quick work of even large corn fields – as long as they’ve got competent carters! And if it’s competent carters you’re looking for, look no further than the next fact sheet… 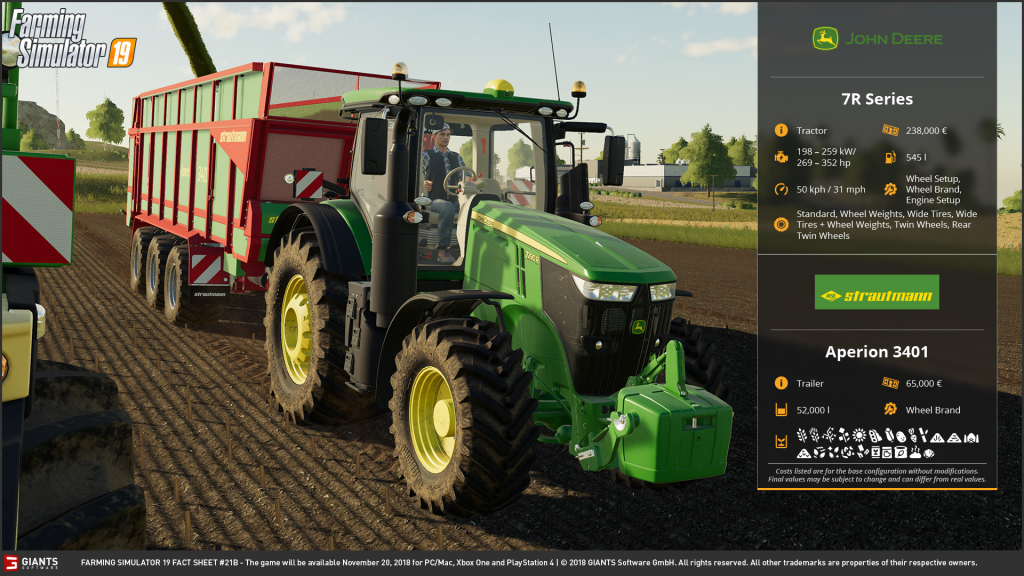 We saw the John Deere 8R Series tractors in early screenshots of Farming Simulator 19, and the 6R Series was introduced in the “Harvesting Crops” gameplay trailer. Many have been wondering which other pieces of green machinery would be making their way into the game, and now we have another: the John Deere 7R Series. Naturally, the 7R falls between the 6R and 8R in terms of power, and along with those other series will provide players with a wide range of available horsepowers if they want to stick with the popular manufacturer’s equipment.

The 7R provides options ranging from 269 to 352 horsepower, and also allows for a wide variety of wheel options, which will allow for this tractor to be applied in many different situations. Its top speed of 50 km/h (31 mph) is relatively mid-range, and make it a decent option for a multitude of field operations, including hauling chaff (as seen in the image).

The 7R is shown using the Strautmann Aperion 3401 trailer, a large and versatile trailer that we haven’t seen in previous Farming Simulator games. With a capacity of 52,000 litres and the ability to accept every material in the game, this trailer will likely prove very useful in transporting any number of commodities around the farm and to the various sell points. It adds to the number of relatively large trailers we’ve previously seen, and I’m excited that there will be several options for players, as it allows for each farm to feel unique – any time player choice increases, it can’t be a bad thing. And speaking of variation in trailer options… 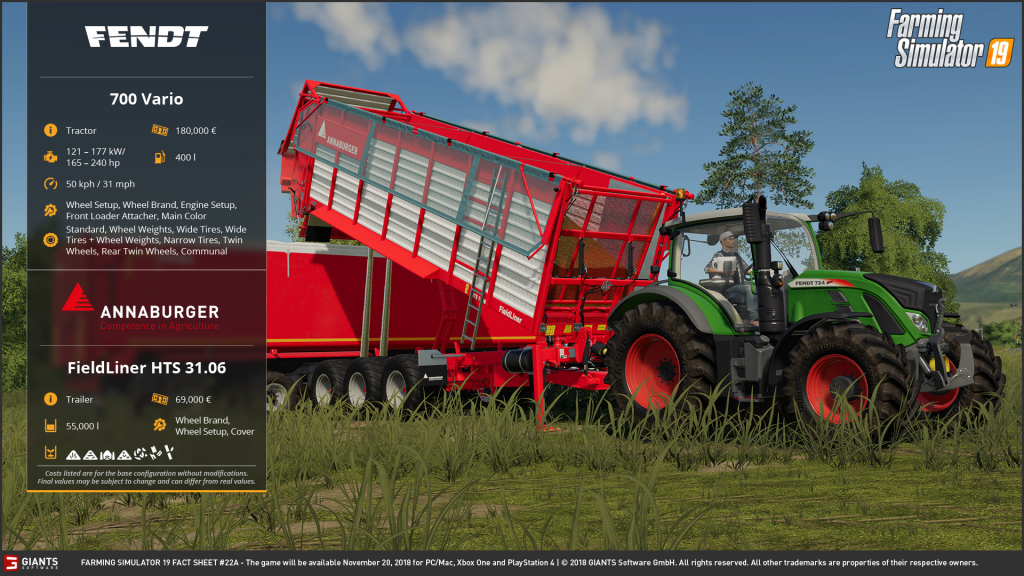 This is a new and exciting sight for fans of Farming Simulator! I haven’t seen a trailer like this in the game before. The Annaburger FieldLiner is unique, as it has hydraulics that allow it to rise up and unload into another trailer. With a capacity of 55,000 litres it’s already a pretty big trailer, but this unloading ability will make it a great choice for collecting material in a field and transferring it to a quicker mode of transport, like what’s shown in the fact sheet. While the FieldLiner won’t offer many options (though it does allow for different wheel setups and the addition of a cover), it will certainly be versatile enough already!

The Fendt 700 Vario series of tractors was introduced in Farming Simulator 17 and joins a number of already-announced Fendt tractors. This series from the “other” green brand provides a great deal of customization, including a front loader attacher and a host of wheel options. It’s nice to see yet another option for a mid-sized tractor, providing even more choice to players. The Fendt also allows players to choose between a lighter or darker green for its main colour. 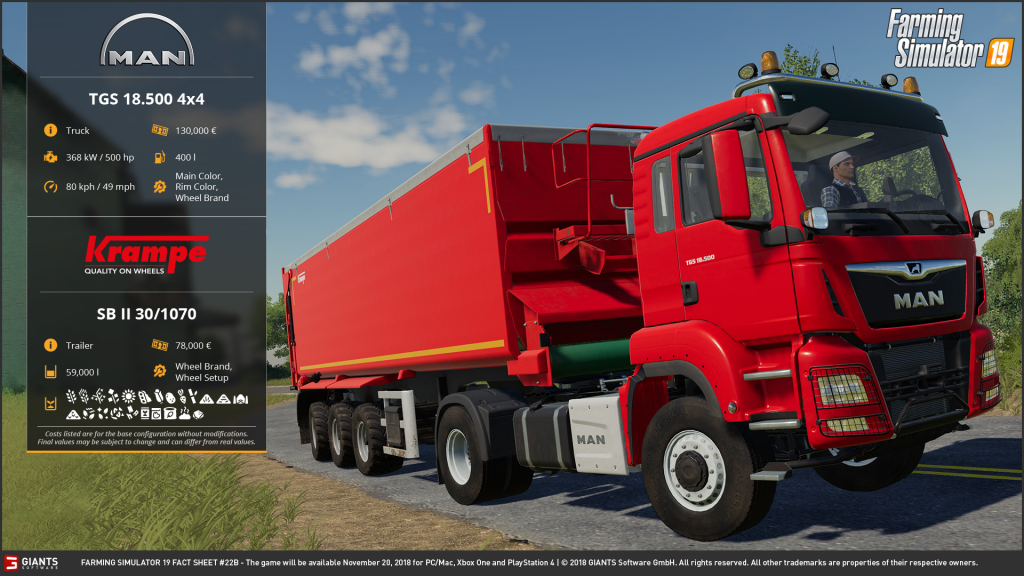 These two pieces of equipment have been perennial staples in the Farming Simulator series, and it’s great to see them both back once again. We’ve already seen a number of American-style semi-trucks, so it’s nice to see them balanced out with a other European-style machine. We already knew MAN trucks were in the game (with a neat-looking forestry truck introduced several weeks ago) but this will provide another option for quick hauling of large quantities of material. At 500 horsepower it falls between the Lizard “Warrior” and “Hulk” trucks in terms of power, so there will be a wide range of possibilities for players when choosing their trucks.

The Krampe trailer in this fact sheet is generally one of the largest in the game, so I would guess that this will be no different (though we know that the Wilson Pacesetter will be ever-so-slightly larger at 60,000 litres). It will accept every type of material in the game, like many of the other trailers, so it isn’t limited in its abilities at all. The Krampe will also offer a customizable wheel setup, though I’m not entirely sure what that will look like.

That’s all for this week’s fact sheets! Make sure to check back for more news and analysis on everything related to Farming Simulator 19 on Scholarly Gamers.