Another Fact Sheet Friday has arrived, and GIANTS Software is continuing to spoil us with more than the usual 2 sheets, 4 images standard formula that they typically keep to. This week we’ve got 3 fact sheets (spread across 6 images) showing off a total of 11 pieces of machinery! Fact sheets are now being released each week as we approach Farming Simulator 19‘s November 20 release date.

In case you’ve missed any of the previous fact sheets, you can find them all here:

This week, we’ve got some equipment you can use for making silage, fertilizing, and transporting various materials. Take a look!

Fact Sheet #18A gets up close with the New Holland FR780 forage harvester and 300FP header:

The New Holland FR780 forage harvester is a beast of a machine, boasting 775 horsepower. There’s no doubt that it will make quick work of any field, whether it’s corn or cut grass. Players will be able to choose whether they want their FR780 with standard or wide tires, with a starting price of $364,000. Seasoned players know that this machine will pay itself off in no time, given the relatively high return that is typically seen on silage (and also the high return on the use of silage for feeding cows).

The fact sheet shows the 300FP header picking up a row of grass and feeding it into the chopper. I’m sure that at the very least we’ll also see a corn header for the FR780, so that it can be used for either grass or corn silage. But a forage harvester needs something to be on the receiving end of the chaff it spits out, and in this case it’s… 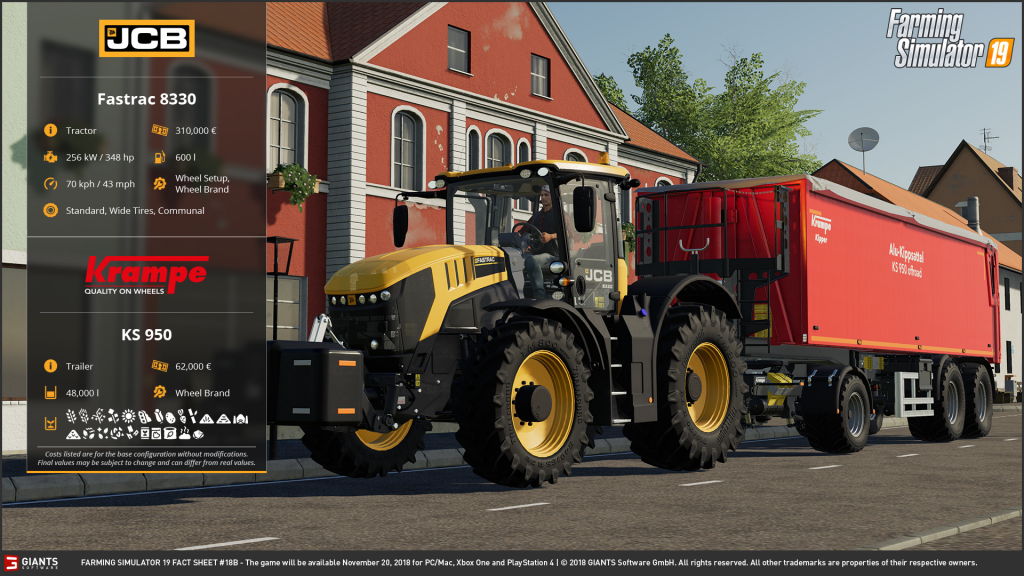 We saw our first look at JCB in Farming Simulator 19 with the Fastrac 4220 being shown in the fact sheets presented two weeks ago. This week we get a bigger Fastrac on display with the 8330. While the 8330 doesn’t offer as many options as its smaller counterpart (no option on engine size, front loader attachment, all-wheel steering, and fewer wheel setups) it is a powerful and fast tractor sporting 348 horsepower and a top speed of 70 km/h (43 mph) – even faster than the 4220’s maximum of 62 km/h. With speeds like that, this tractor will make an ideal hauler between the field and the silage bunker.

The Krampe KS 950 might say “offroad” on its side in the picture, but it is a trailer that looks quite at home on the road, with a front steering axle and two rear axles. [Correction: the front axle is a Krampe Dolly 10 L, used to attach semi-trailers to tractor hitches] It’s got a sizeable capacity at 48,000 litres, and looks to be able to hold absolutely every type of material in the game. It might be a little tougher to reverse into a silage bunker with that front axle [dolly], but it will likely be quite stable and difficult to tip. 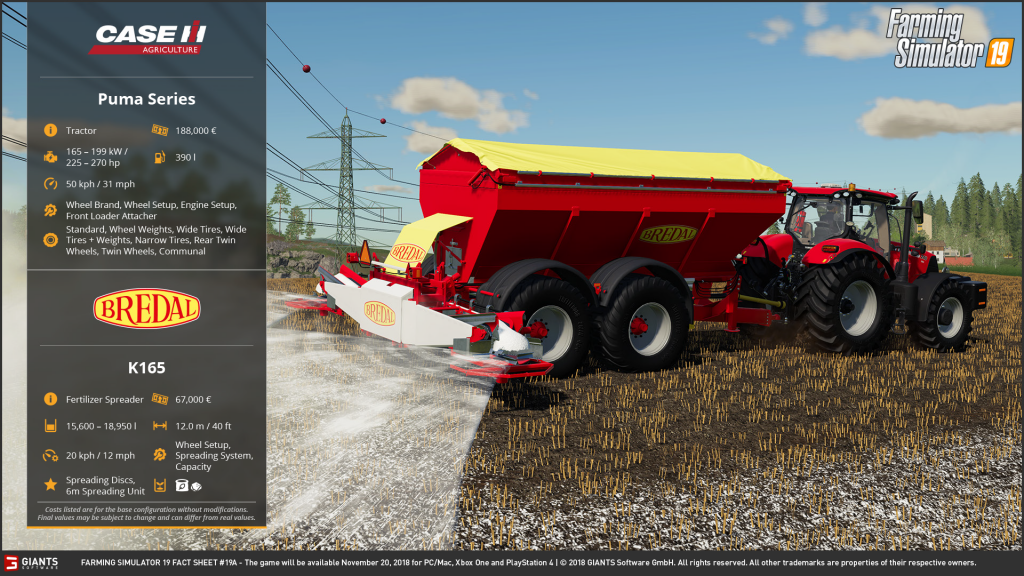 The Case IH Puma Series tractors have been in the Farming Simulator series for some time now, and it’s nice to see them back. Always a solid and versatile option for a mid-range tractor, the Puma ranges from 225 to 270 horsepower. Options include the ability to attach a front loader, as well as a host of wheel options including wheel weights, rear or full duals, communal (road) tires, and more. Tractors of this size are right at home doing all sorts of jobs, from working with bales and feeding animals, to running mid-size cultivators or seeders, to fertilizing.

The Puma is shown pulling the Bredal K165 fertilizer spreader, which has historically been one of the largest options for fertilizing crops in the game. With a large capacity (available ranging from 15,600 to 18,950 litres) and a 12.0 m (40 ft) spreading width, the K165 can fertilize several large fields without needing to be filled. Since it can run at 20 km/h (12 mph) it runs a little bit slower than the large Hardi Rubicon sprayer (which can work at 25 km/h) and covers far less width (the Rubicon has a 48.5 metre, or 160 foot, boom span) but it is also significantly cheaper – $67,000 versus $489,000 for the Rubicon. With all that said, the K165 looks like it will present an excellent option for players looking to fertilize large fields without a similarly large investment in the equipment.

In addition, the K165 is capable of spreading lime, which will be necessary every so often in order to keep yields high. Finally, it should be noted that this is the first time we’ve seen a fertilizer spreader with different options, including capacity, spreading discs, and a 6m spreading unit – I don’t know what either of those latter two options will change, so I’m looking forward to finding out! 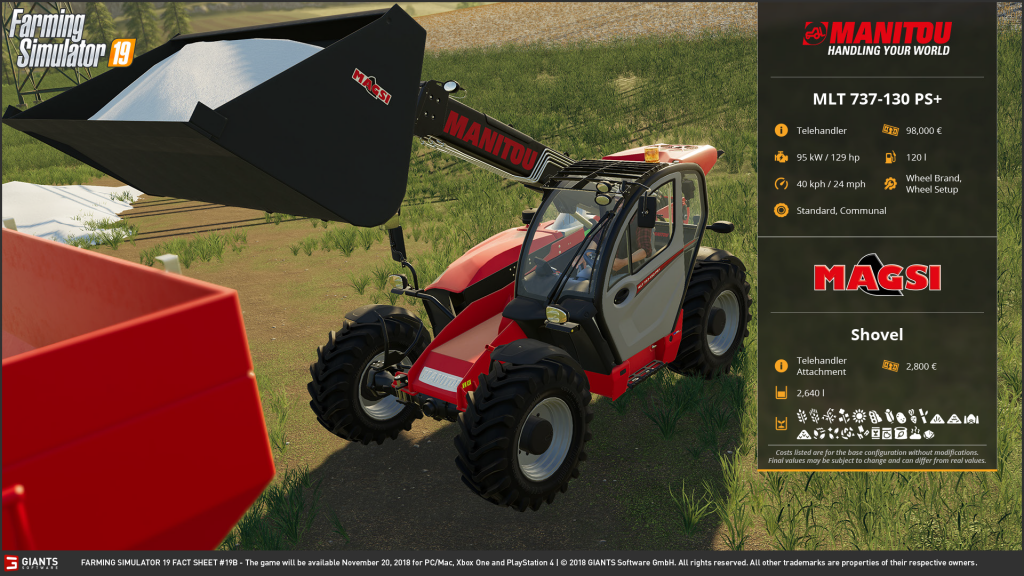 GIANTS showed off some new Manitou equipment in a “featurette” video that was posted yesterday. While the video showed us our first ever forklift in a Farming Simulator game, this fact sheet focuses on the MLT 737-130 PS+ telehandler. The video showed the telehandler (with the same MAGSI bucket from the fact sheet) scooping up fertilizer and dumping it into the Bredal K165 spreader. In case you didn’t play Farming Simulator 17 (or 15), it should be noted that 17 introduced the ability to “tip anywhere” and put materials on the ground anywhere on the map. This gave players the option of creating large stockpiles of fertilizer, seed, or crops and picking them up later. This is the concept shown in the video, and represented in this fact sheet.

The telehandler can scoop up fertilizer or lime (or any number of other materials, but in this case it’s filling the K165) and quickly fill the spreader with the MAGSI bucket’s 2,640 litre capacity. The bucket can, naturally, hold virtually any material in the game except water or milk. The telehandler can also utilize a number of different attachments depending on the task at hand, such as a bale spike or round bale grabber. Telelhandlers are popular for their maneuverability and the substantial reach of their telescoping booms, and I’m sure the MLT 737-130 PS+ will be no different. It also has the option of using communal tires if players aren’t planning on using it in off-road situations very much. 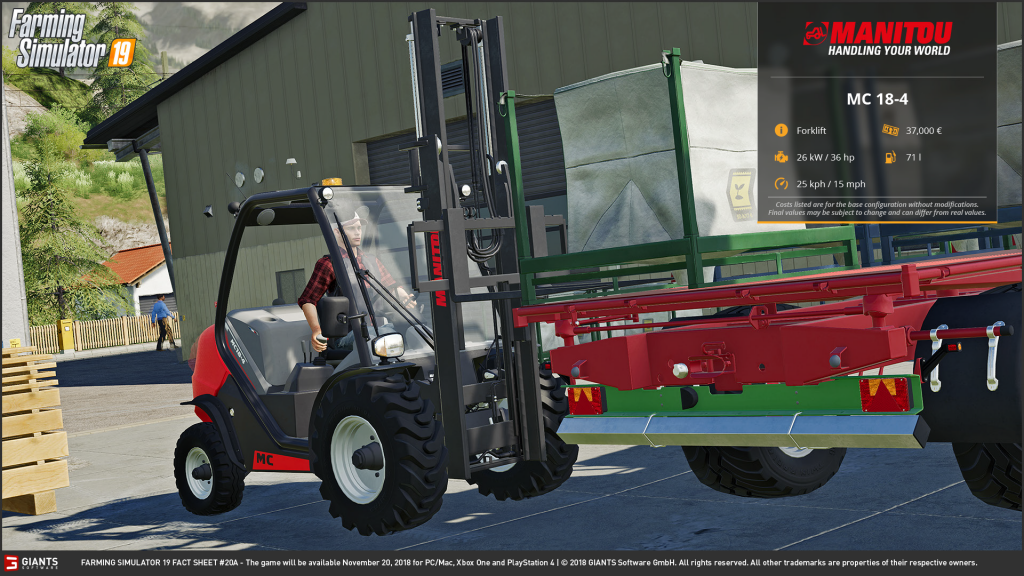 Surprise! I briefly mentioned the forklift above, but GIANTS decided to give it its very own fact sheet! This is the Manitou MC 18-4, the first ever forklift in a Farming Simulator game (outside of mods). I’m sure many players will be very happy about this, since it will likely provide an extremely maneuverable way to handle pallets of items such as seed, fertilizer, wool, and more. The forklift is relatively simple, and not a great deal of details are given in the fact sheet, but it’s fantastic to get a close up of this machine and know that we’ll have it as an option in Farming Simulator 19. Its shown taking a seed pallet off (or putting it on) a trailer…

Fact Sheet #20B shows off the Fendt 500 Favorit and Strautmann SEK 802 trailer: 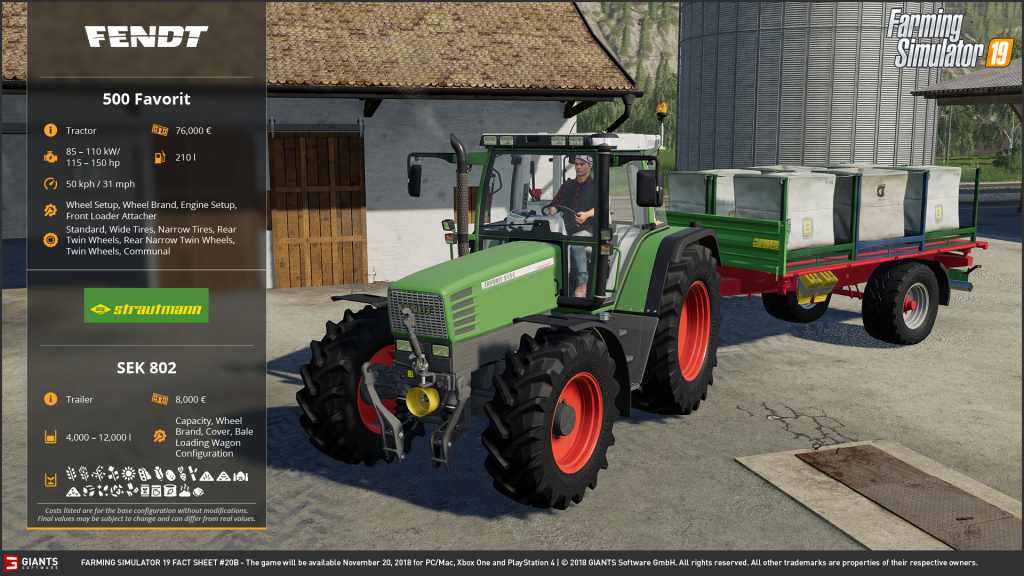 The Fendt 500 Favorit is a “favourite” (heh heh) of many European players, having been a popular model from the mid-1990s. It was an extremely popular mod for Farming Simulator 17, and it’s excellent to see GIANTS bringing it into the fold for 19. The Favorit will offer many different options for its wheel setup, and it can also attach a front loader. A relatively small tractor (ranging from 115 to 150 horsepower), it will be well suited to small jobs and caring for animals.

While many players will be excited about the Fendt shown in this fact sheet, I’m most excited about the Strautmann trailer. The SEK 802 looks like a wonderfully versatile trailer, with options for a bale loading configuration, a cover, and a regular flatbed for transporting various materials. It’s relatively small, and can likely be pulled by a pickup truck or utility vehicle, which will make it even more useful.

I’m intrigued by the variable capacity of the trailer, as it ranges from 4,000 to 12,000 litres and says it can hold every type of material in the game, however the fact sheet shows the trailer with open sides that wouldn’t be capable of holding grain, seed, or any small materials. I’m excited to buy the trailer (and at $8,000 it won’t take much) and see what all the various options look like! Come to think of it, I won’t even need to buy it – the newly-introduced shop preview feature will let me see the options without spending a penny!

That’s all for this week’s fact sheets! Stay tuned for more every week, as well as additional news on Farming Simulator 19 as we get closer to its release!