Fact Sheet Friday is back! Each week, GIANTS Software releases a set of fact sheets that provide a closer look at some of the vehicles and equipment in Farming Simulator 19. As we creep ever closer to the game’s November 20 release date, we learn more and more about the new (and returning) machinery that will be available to players when they start up their farms.

In case you’ve missed our analysis on any of the previous weeks’ fact sheets, you can find it all here:

Most weeks, GIANTS releases 2 fact sheets (spread across 4 images), typically featuring a total of 8 pieces of equipment – sometimes a couple more or less, but on average that’s what we usually get. This week, the developer has given us 4 fact sheets (across 8 images) showing off 13 items! Let’s get down to it and take a look at what we’ve got…

Fact Sheet #14A shows us the Valtra A Series and Kuhn SR 314 windrower: 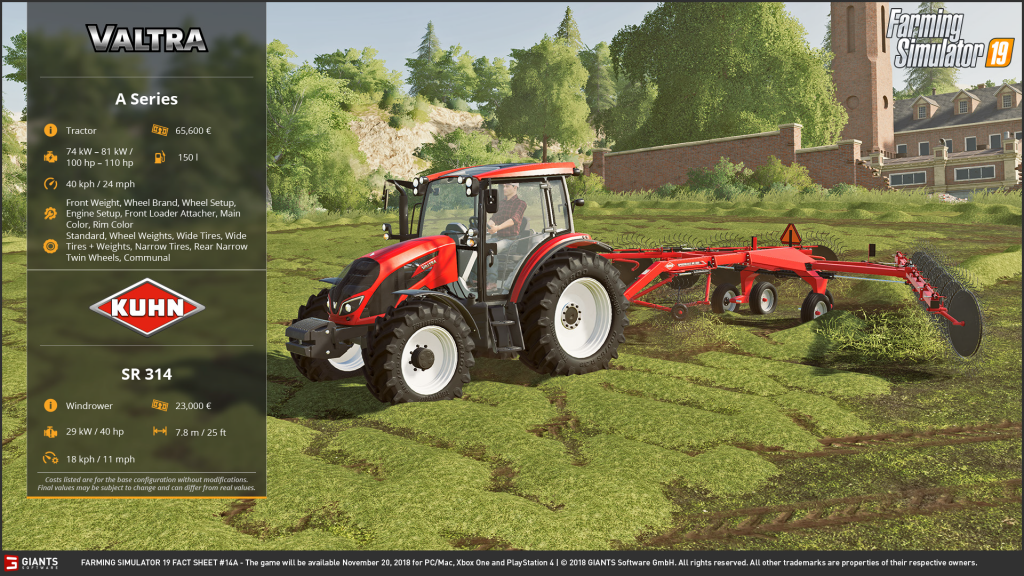 While Valtra was first featured in Farming Simulator 17, the A Series is a new addition to the game. It’s a relatively small tractor, offering only up to 110 hp, but what it lacks in size and power it makes up in versatility. The A Series will offer a multitude of customization options, including the main and rim colours, wheel brand, front weights, and a large number of different wheel setups. It also has the ability to attach a front loader, making it a useful tool on farms with animals (as we saw in the “Tending to Animals gameplay trailer).

The Kuhn SR 314 windrower was not a part of the equipment roster for Farming Simulator 17, and looks like it will be an excellent option for smaller operations or those just starting out into haying. Taking dried hay and pulling it all into one row behind the tractor, these machines make it easy to pick up with a baler or loading wagon. And speaking of loading wagons…

Fact Sheet #14B provides a closer look at the Case IH 7200 Pro Series and a Schuitemaker Rapide 580V loading wagon: 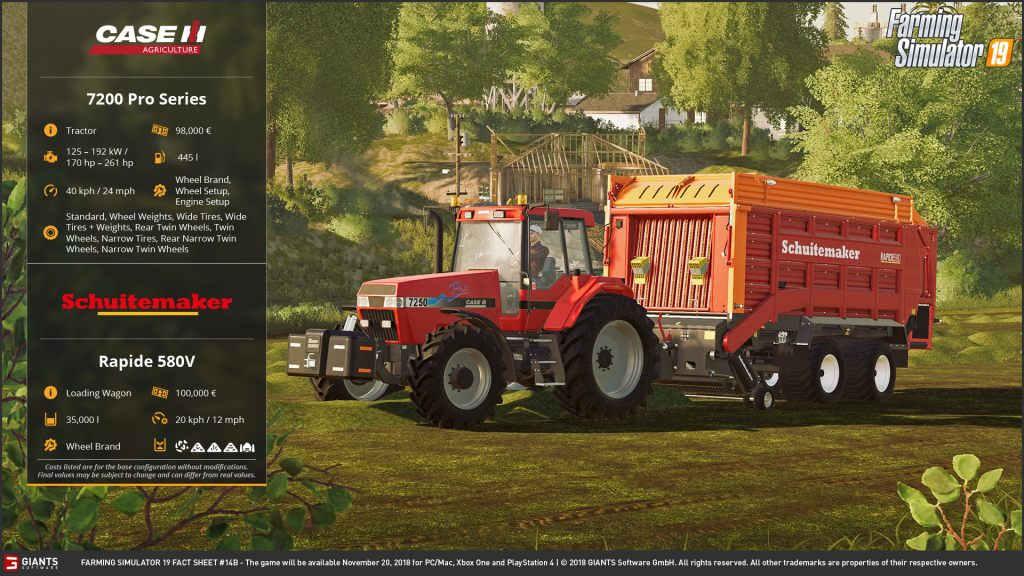 When GIANTS released a video giving a tour of Farming Simulator 19‘s new Ravenport map many players noticed a couple of tractors extremely far away in the background that looked unlike any of the previously announced pieces of equipment. It now seems clear that those tractors were the Case IH 7200 Pro Series – a mid-1990s model with mid-range power. Many players will be happy to see another older tractor in the mix, as it adds additional character to farms (not to mention many players likely grew up with older equipment such as this). The 7200 Pro Series will offer a multitude of wheel options as well as a range of engine setups between 170 and 261 hp. And at $98,000 it’s sure to be priced well compared to some of the newer tractors in the shop.

Schuitemaker is a new addition to Farming Simulator 19, and we saw the brand for the first time in last week’s fact sheets, which featured a trailer that can be used for a variety of forages. This week we get to see a medium-sized loading wagon, which holds 35,000 litres of chaff, grass, hay, straw, or silage. Unfortunately the fact sheet doesn’t show the horsepower requirement for this wagon, but we know it can’t be any more than what the Case IH 7200 can handle (261 hp). In fact it must be less than 240 hp, because the next fact sheet shows its big brother… 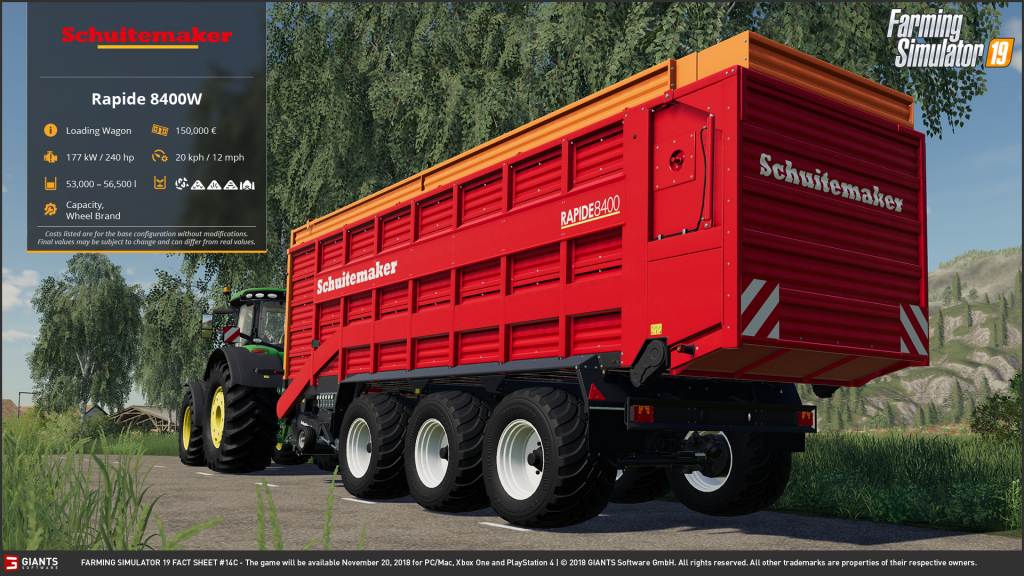 As mentioned above, this loading wagon is essentially a larger version of the 580V. It holds the same materials, just more of them. One thing that the 8400W offers that its smaller counterpart doesn’t, is the option to choose between capacities. The 8400W is available in 53,000 and 56,500 litre capacities (and perhaps possibly an additional option in between?), so its base price tag of $150,000 could grow slightly if you want the biggest capacity. And you might if you’re feeding a lot of horses. Speaking of horses… 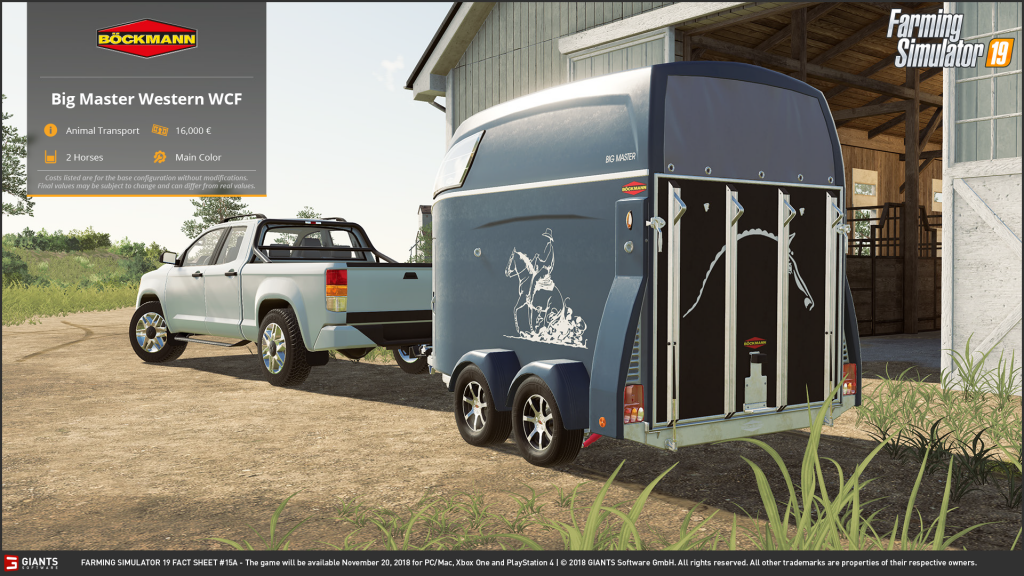 This isn’t our first time seeing the Böckmann Big Master horse trailer, but it’s our first time seeing the definitive details! As I indicated in my analysis of the “Tending to Animals” trailer, the Böckmann website shows that this trailer can transport two horses at once. At a price of $16,000 it’s relatively cheap and should provide an easy entry into the all-new world of caring for horses in the game. The website also shows that this trailer comes in a wide assortment of colours, and the fact sheet confirms that we’ll be able to to customize the colour of the trailer. I can’t wait to trailer my first horses to their paddock and start training them!

Fact Sheet #16A gets up close to the New Holland T6 Series: 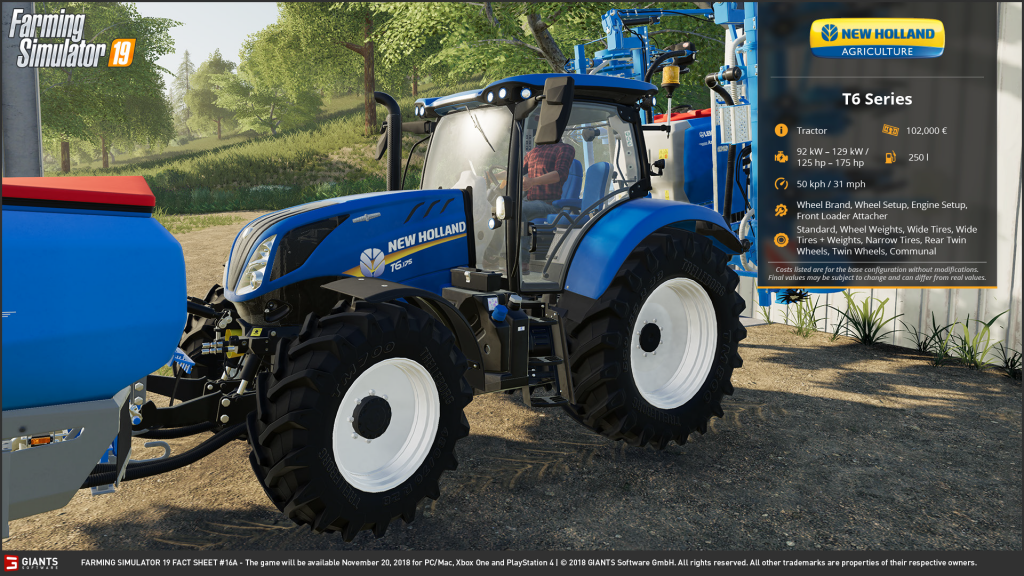 The T6 was shown previously in the “New Field Interactions” featurette video, and was some of the first equipment posted to the master list on the Farming Simulator website. Nevertheless, we haven’t seen it this close, nor gotten all the details on what options it will offer in this iteration of the game. The fact sheet shows us that the T6 will (naturally) once again offer the ability to attach a front loader, as well as a great deal of wheel configurations including weighted wide tires, narrow (“care”) tires, rear twins (“duals”) or full duals, and communal tires – which I have come to understand are a type of road tire typically used when mostly using the tractor to haul things on paved surfaces. This fact sheet doesn’t explain what the blue contraption it’s attached to is, but the next one does…

Fact Sheet #16B shows us the Lemken Azurit 9 planter in combination with a Solitair 23 fertilizer tank: 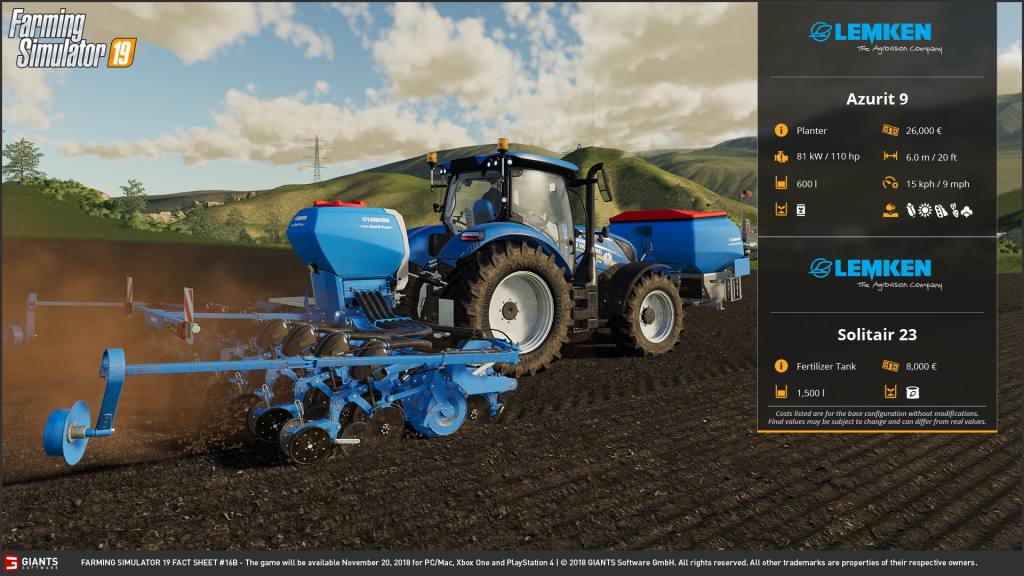 Lemken was part of Farming Simulator 17, but only offered one plow, one cultivator, and one sowing machine. None of these were the Azurit 9 and Solitair 23, so it may be safe to assume we’ll be seeing more Lemken equipment in Farming Simulator 19. This combination unit allows you to plant and fertilize at the same time, though it looks like without the Solitair 23, the Azurit 9 will only be able to plant, as it has no fertilizer carrying capability on its own. With a very small capacity of 600 litres, this seeder will likely need frequent filling, but it could be a small price to pay for the ability to get two jobs done at once. With a working width of 6.0 metres (20 feet) it will probably cover a fair bit of ground, and looks like a great early option with its extremely low price of $26,000 ($34,000 if you get the fertilizer tank too). 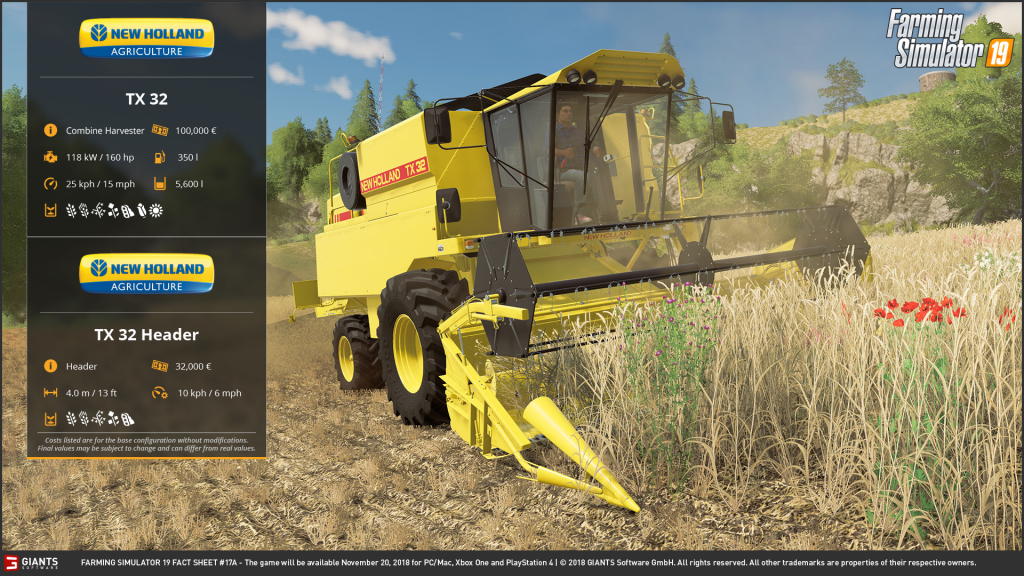 Well if you’re a fan of older equipment, this is the week for you when it comes to fact sheets! First the Case IH 7200 Pro Series, and now we get the New Holland TX 32 – a late 1980s to early 1990s European-model combine. This looks like it might be a good early combine with its relatively low price. With that low price comes a low capacity though, as the TX 32 can only hold 5,600 litres of grain. For the sake of comparison, the Case IH 1660 Axial-Flow (the starting combine in Farming Simulator 17) held 6,340 litres.

The TX 32 header is slightly smaller than the Case IH 1030 that players started with in 17 as well – the 1030 was 4.3 metres (approximately 14 feet), which has a very slight edge over the TX 32’s 4.0 metres (13 feet). Regardless of size, I’m sure many players will be ecstatic to see this combine and header available in the game, as this older equipment certainly helps bring some folks on a trip down memory lane, or perhaps do a bit of role play as a small farmer who can’t afford to buy the biggest and best (such as the AGCO IDEAL from the first set of fact sheets). 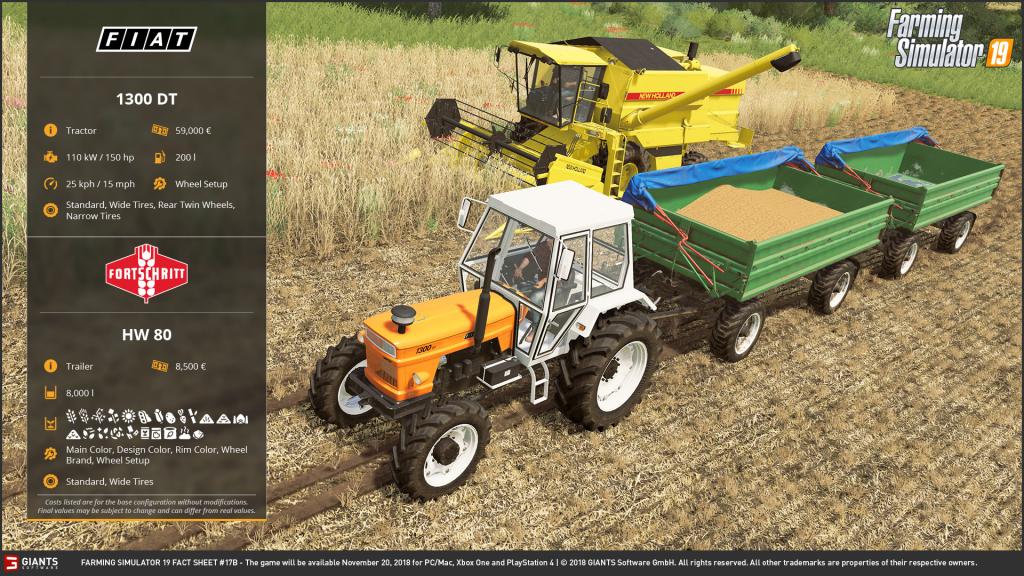 This weeks’ fact sheets keep on coming with the vintage equipment! The Fiat 1300 DT is a mid-1970s tractor that boasts a surprising 150 hp considering its size. It’s quite slow (a maximum speed of 25 km/h or 15 mph) but could serve as a good option for puttering about the farmyard. The 1300 DT also offers a number of wheel options including rear duals and narrow tires, so it could potentially serve as something players use for light fieldwork such as weeding.

To the best of my knowledge, we haven’t seen Fortschritt equipment in a Farming Simulator game before (except perhaps through mods, of course). According to Wikipedia (not a scholarly source I know, but information on the brand was hard to come by!), Fortschritt was an East German brand of tractors, combine harvesters and other agricultural machines founded in 1951, which was taken over by Case IH in 1997. The HW 80 is a fairly small trailer, but since it’s simply a steel box it can hold absolutely anything you could want it to. In addition to this, you’ll be able to customize the colour of the box, design, and rims, and even put wide tires on it if you’d like. From my experience with Farming Simulator 17, I know that these types of trailers are incredibly useful for feeding animals – especially pigs, which require several different types of grains.