A new gameplay trailer has been released for Farming Simulator 19! This “Tending to Animals” trailer is labeled as gameplay trailer #2, though we’ve seen a number of smaller “featurettes” from the game’s developer, GIANTS Software, over the past few weeks. In this case, the trailer shows the different animals that players will be able to buy, care for, and ultimately profit from – cows, pigs, sheep, chickens, and horses. And there are a few glimpses at never-before-seen equipment as well!

First off, I am stunned (again) by the animation of the horses. Shown traveling between the various animal enclosures, the rider and horse are smooth, with a very natural-looking trot and canter. For a developer’s first (public) attempt at animating a horse and rider, it’s incredibly convincing. After a few shots of the horse and rider, we’re taken to our first stop: the cows.

Cows have been a longtime staple in the Farming Simulator series, and not a great deal has changed in the past couple of iterations (if it ain’t broke, don’t fix it!). Players feed them “power food” – more commonly known as total mixed ration, or TMR – which is a mixture of hay, straw, and silage. In the trailer we see the Strautmann VM 1702 Double SF fast-cut and John Deere 6145M (both of which were shown in last week’s fact sheets) mixing feed and providing it to the cows. 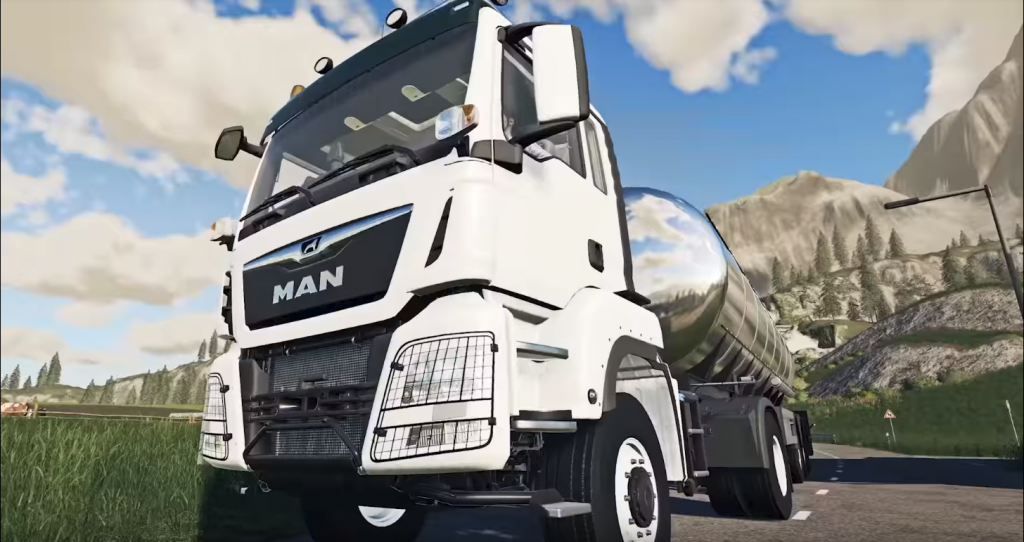 After this, however,we see something entirely new: how milk will be sold. In recent versions of Farming Simulator, milk has been automatically sold at midnight each day, no work necessary. We recently found out that this would not be the case in Farming Simulator 19, but we were left hanging when it came to how we would go about selling that liquid gold. In the video we see a MAN semi truck pulling a silver tanker trailer following the text “They give me milk I can sell!”, answering any lingering questions on how we get the product to market. 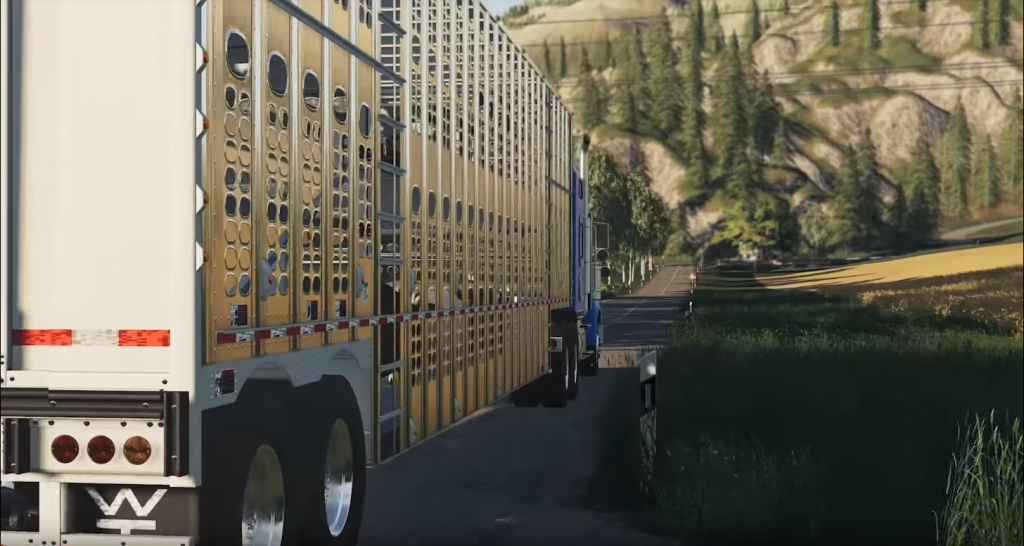 From there we see another new piece of equipment: a Wilson Trailer Silverstar livestock trailer (often referred to as a “cattle liner”). I am quite excited to see this addition to the game, as this style of livestock trailer is immensely popular in my area and across North America, and I’m sure many other players will be pleased to see it as well. The Silverstar is shown transporting pigs to their enclosure, after which we see a Valtra A-Series tractor taking pallets of pig feed off a trailer. Those who played Farming Simulator 17 will recall that players have the option of feeding expensive pre-mixed feed (for 100% productivity) or providing a number of different crops to reach 100%. The last thing shown with the pigs is the New Holland L218 skid steer loader (shown in Fact Sheet #10A) using a Warzee bale shredder to provide straw bedding.

After that we’re off to see the sheep and chickens, and not much has changed with them other than the ability to place their pens wherever you’d like. For the chickens, it looks like their eggs will now automatically be packaged into boxes, which will likely need to be loaded by hand into a pickup truck or UTV like the Mahindra Retriever (which comes as a pre-order bonus with most versions of the game). There appears to be a second “interaction” area (denoted by the black and yellow lines on the ground) in the chicken enclosure, which suggests to me that we’ll need to feed the chickens in Farming Simulator 19 – in previous games, the chickens required no care. 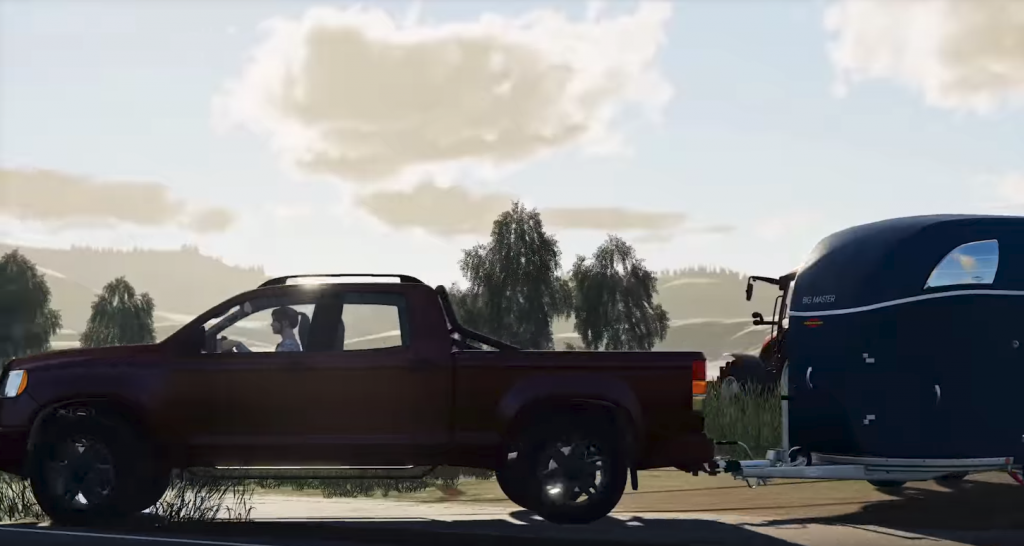 Speaking of pickup trucks though, we’re given our first glimpse at a full-size pickup in-game when the trailer takes us to the horses. First we see the same Valtra tractor from earlier bringing hay to the horses in the paddock, then we see a horse being loaded into a trailer pulled by a pickup truck. 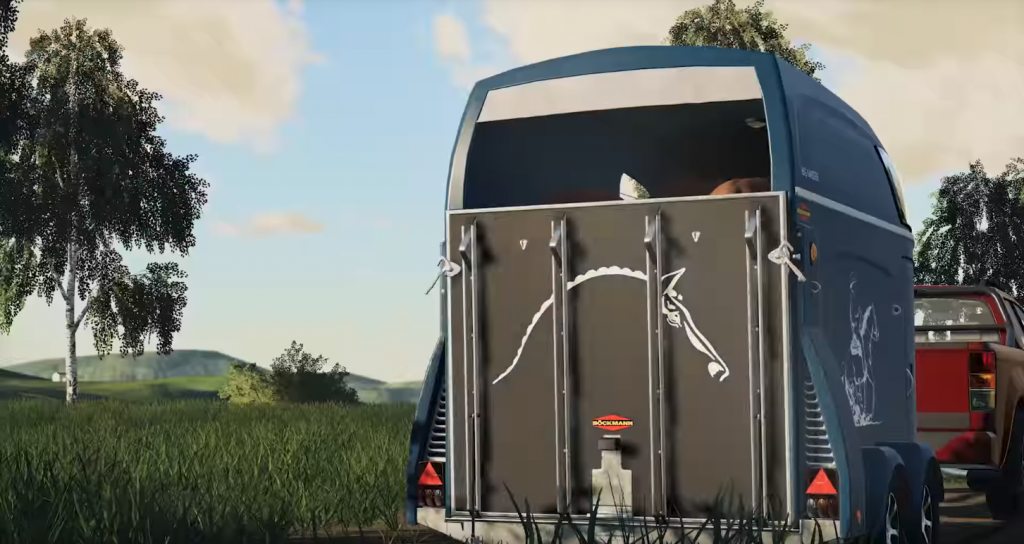 The trailer is a Böckmann Big Master, which uses a ball-type hitch (I can already hear the requests for a fifth wheel, or “gooseneck” trailer coming). According to Böckmann’s website, the trailer can transport up to two horses. It also apparently comes in an assortment of colours, and so I hope that we’re able to customize the trailer in-game as well. The pickup truck is likely a Lizard brand, as it doesn’t appear to sport any official emblems. As such, it’s likely a mixture of characteristics from a number of brands. The tail lights look like something off a Chevy Silverado/GMC Sierra, but the front end looks more like a Toyota Tundra or Nissan Titan. In any case, players will be happy to have seen this modern-looking pickup in action.

We see the Valtra A-Series again, this time feeding the horses hay (we also know that they’ll need oats, and that you’ll need to train them to increase their value).The final scenes of the trailer show two farmers on horseback approaching each other, which clearly shows that players will be able to ride horses together in multiplayer if they so choose (and if they buy multiple horses!). We also get our first sighting of the dog, which has previously been confirmed to be a companion in the game with no function other than adding to the realism in the game – and that’s perfectly alright with me!

The trailer really shows off the updated graphics engine and gives a feel for the variety in animals that’s possible. The animations look great, the scenery looks great, and the equipment looks great. Farming Simulator 19 releases on November 20 for PC, Mac, PS4, and Xbox One, and I can’t wait! Stay tuned to Scholarly Gamers for more news!