This week the fact sheets take back to the fields, showing off a powerful Challenger tractor, Bednar cultivator, the Case IH cotton harvester that’s been widely shown in screenshots and videos, and the Case IH Maxxum Series tractor. Here are this week’s fact sheets (and some analysis to go along with them)!

Fact Sheet #08A gives us a look at the Challenger MT800E Series tractor pulling a special Bednar cultivator: 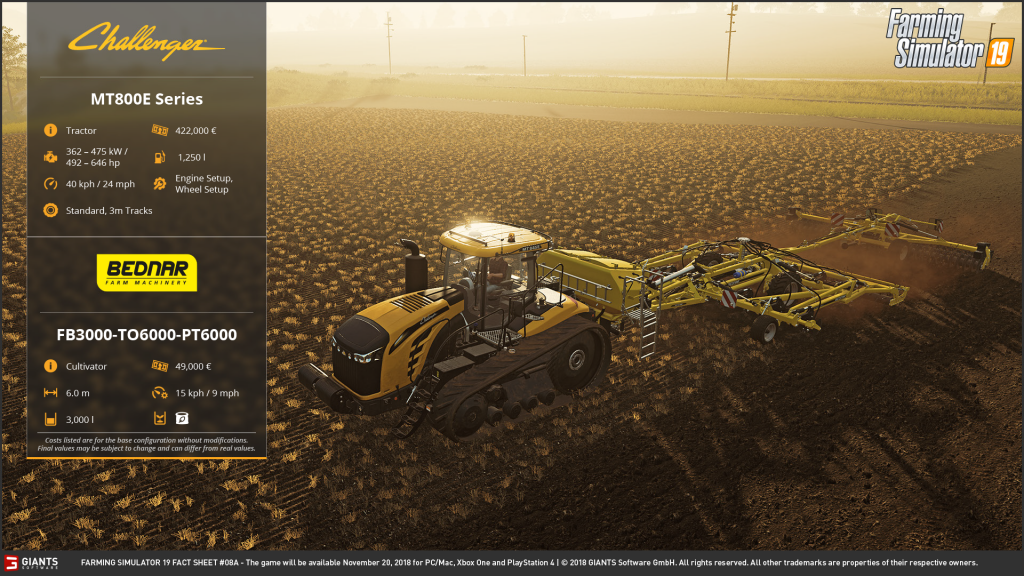 The Challenger MT800E was first introduced in Farming Simulator 17, and was certainly on the more powerful end of the tractors in the game. With engine options ranging from 492 HP to 646 HP, it will rival the Fendt 1100MT and Case Quadtrac (both shown in previous fact sheets) which have a maximum horsepower of 646 HP and 692 HP, respectively. Similar to 1100MT, the Challenger will offer players the option of standard or 3m tracks, and only has a top speed of 40 km/h (24 mph).

The MT800E is shown pulling a Bednar cultivator, shown as the FB3000-TO6000-PT6000. This is clearly a combination unit, and Bednar’s website indicates that these three abbreviations/model numbers represent a “fertibox”, “terraland”, and “presspack”. Looking further at the websites for these various tools tells us that the Terraland TO6000 is a chisel plough, and the PT6000 is a detachable packer – this means that the combination unit shown in the fact sheet will allow players to chisel plow and re-pack the soil, while adding solid fertilizer at the same time. This should have a 2-in-1 effect, whereby players can both plow and fertilize at the same time. This will prove particularly useful for those who enjoy growing root crops (i.e., potatoes and sugar beets), since we now know that plowing will only be required on fields where they have been grown. It may also be a useful tool for those looking to grow cotton, since the cotton plants will have to be tilled under after harvest in order to prepare the field for seeding the next crop. And once you’ve grown some cotton, you’ll need… 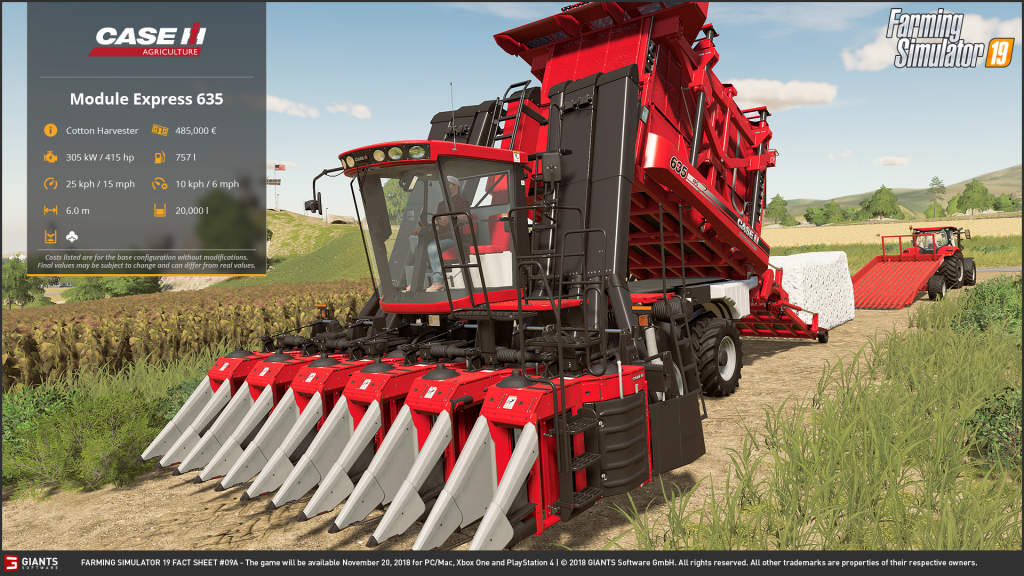 The Case IH Module Express 635 cotton harvester has been widely shown by now, appearing in the Farming Simulator 19 E3 trailer, as well as the Gamescom gameplay trailer and demo, and the “Harvesting Crops” trailer. While it’s unclear whether this will be the only cotton harvester available in the game, it certainly will be the largest, with a price tag of $485,000, working width of 6.0 metres (approximately 20 feet), and a capacity of 20,000 litres. The Module Express will produce cotton modules – large square “bales” of cotton that can then be picked up by special trailers. GIANTS has indicated there will be two such trailers in the game, capable of carrying either one or two modules at once.

The next fact sheet shows one of these trailers, though it doesn’t give any additional details on it. It does, however, show off a new tractor… 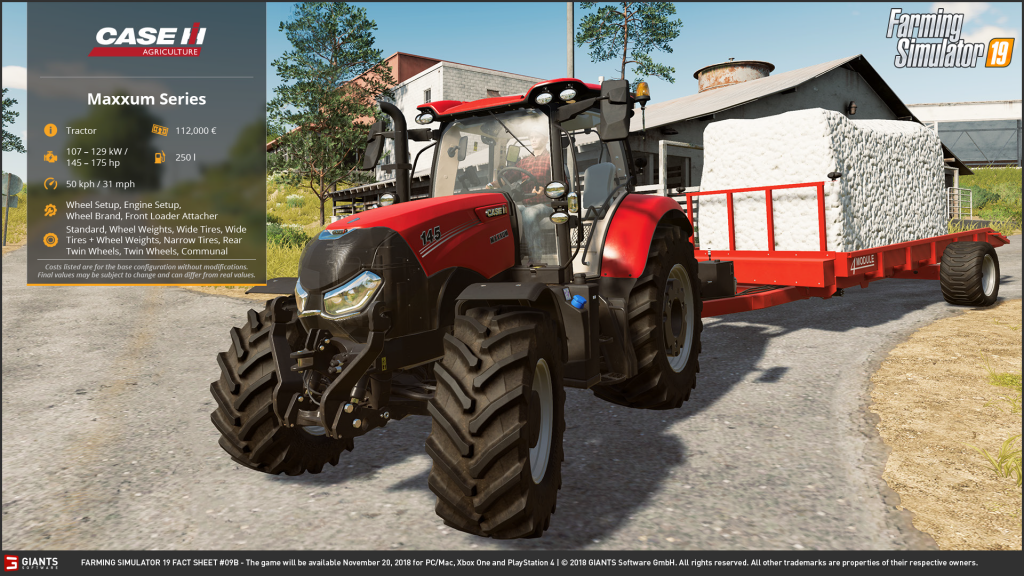 The Case IH Maxxum Series is pictured pulling a small cotton module trailer (the larger one will require a semi truck) and the fact sheet seems to tell me that the tractor will make for a good low or mid-range option. Available from 145-175 HP it should be able to handle a range of the less-demanding tasks around the farm or on smaller operations.

What really makes the Maxxum series stand out to me is the sheer number of available options it presents. This looks to be an incredibly versatile tractor, with the ability to add a front loader as well as a host of wheel setups to accommodate various tasks. Dual wheels, wide tires, weights, narrow tires…this tractor has it all. And with a price of only $112,000, it should be affordable relatively early in the game to help players complete a wide variety of work.

Farming Simulator 19 will release on November 20 for PC, Mac, PS4 and Xbox One. Thanks for checking out this week’s fact sheets, and be sure to check back next week for another set!