UPDATE #1 (July 16, 2018 at 2:00pm EDT): Additional information on a number of features has been confirmed by GIANTS’ Community Manager.

See below for updates in line with original text.

Every year, GIANTS Software hosts an event called FarmCon – a conference at which the developer discusses the latest developments in its Farming Simulator series. This year, the event is being held on July 14 and 15 at the Horsch facilities in Schwandorf, Germany. The schedule includes a variety of presentations, covering topics such as sound design, community management, and workshops on creating “mods”. But the most highly anticipated item on the docket, by both attendees and those who were waiting at home for news, was a 45 minute time slot dedicated to a game demo of Farming Simulator 19.

In the leadup to FarmCon, GIANTS’ Community Manager Lars Malcharek made it clear on several social media platforms that at least one new feature in the game would be revealed during the FarmCon demo. And he was true to his word. After having been teased that one of the features which would be shown would include Malcharek’s “favourite feature” that has been added to Farming Simulator 19, fans waited with bated breath. On Saturday, July 14, the feature was revealed: Players can now build their own farm, including buying land upon which to build. In multiplayer games, you can now have up to 4 farms with 4 players (or teams of players) using their own vehicles and having their own bank accounts.  Players will also be able to upgrade buildings such as stables if they feel they need more space. Update (July 16): GIANTS is testing the possibility of expanding the number of possible “teams” of players up to 8.

The feature was revealed during the Farming Simulator 19 demo at FarmCon, but only those in attendance have seen it in action so far. However, Malcharek (who goes by “Lisertan” on GIANTS’ forums and Discord server) confirmed the feature himself to those not in attendance. Many players believed that something of this nature was hinted at in Farming Simulator 19‘s E3 trailer, where the camera lingered on a “For Sale” in the foreground for a brief moment, with this reveal confirming those suspicions. The ability to build a farm how the player desires is a big leap for the series, bringing it yet another step closer to realism.  Many players have complained in the past about a lack of options in managing money in multiplayer games, as well as a lack of realism in setting up their own farm buildings. It seems that GIANTS has taken this feedback seriously, and has now given players the ability to customize their farms, and even play “together but separately” in multiplayer.

This feature will offer players a level of customization never seen in a Farming Simulator game before. It could also open up many other possibilities, such as the ability for players to compete with each other on the same map, creating separate farms and seeing who can expand faster or make more money.

Author’s note: All features mentioned below have been confirmed by GIANTS’ Community Manager, Lars Malcharek, as being correct. Thank you to “Boddi” at “YesMods” for compiling the initial list that Malcharek commented on; readers please note that the list on “YesMods” was indicated to be mostly – but not entirely – correct.

While one specific feature was revealed by Malcharek on July 14, other features began to come to light as attendees posted about things they’d seen at FarmCon, and as other workshops were held focusing on other components and features that had been added to the game.

Malcharek has added some clarity to the possibility for players to build farms, indicating that there will be several options for players starting out. Players will be able to start without any buildings or equipment whatsoever, but enough money to get them started; another option will provide players with vehicles and equipment, a farm, and fields, but less starting cash. This will allow players to approach the game in different ways, allowing them to focus on acting as a “contractor” who works for other players/farmers and building their own farm “from the ground up”, or taking over an existing farm and helping it grow. Malcharek indicated that GIANTS has not yet settled on exact starting conditions, so these may change slightly before release.

On a related note, Malcharek confirmed that the mission system from Farming Simulator 17 – whereby players could complete jobs for fictional neighbours in order to earn some cash – will return with some adjustments. Players can now choose to use their own equipment or the other farmer’s, and the time limits for the jobs have been removed entirely. In addition, the mission system will now function in both the single-player and multiplayer modes of the game. 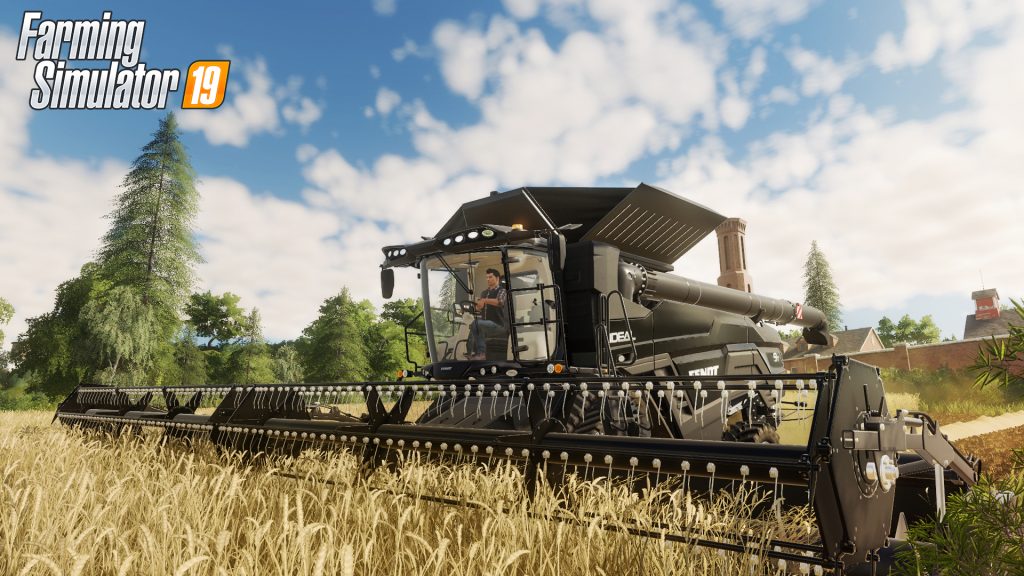 With respect to farm expansion, when players are buying new land in Farming Simulator 19, they won’t buy individual fields as has been done in previous versions of the game. Players will now buy entire sections of the map, including the forests and meadows contained within them. This presents a significant shift to how land ownership will work in the game.

Upgrading buildings will also play an important role, as there will be a limit on how many animals can be placed in one housing area (e.g., barn or stable). However this component is still in development, and GIANTS is currently considering giving players the ability to build three different sizes of animal housing, with the largest option not having any limit to the number of animals that could be placed in it. Further, the ground will adapt to the placement of “placeables” and will level if necessary, so that when players buy a new shed (for example), there will no longer be gaps under the walls if the ground isn’t perfectly even.

FarmCon also provided some insight into new features for vehicles and crops in Farming Simulator 19. It was confirmed that weeds will be removed by a harrow (but only in an early growth stage), and players will also be able to spread lime on their fields – a method used widely in modern farming to ensure that soil isn’t too acidic, which can harm crops. 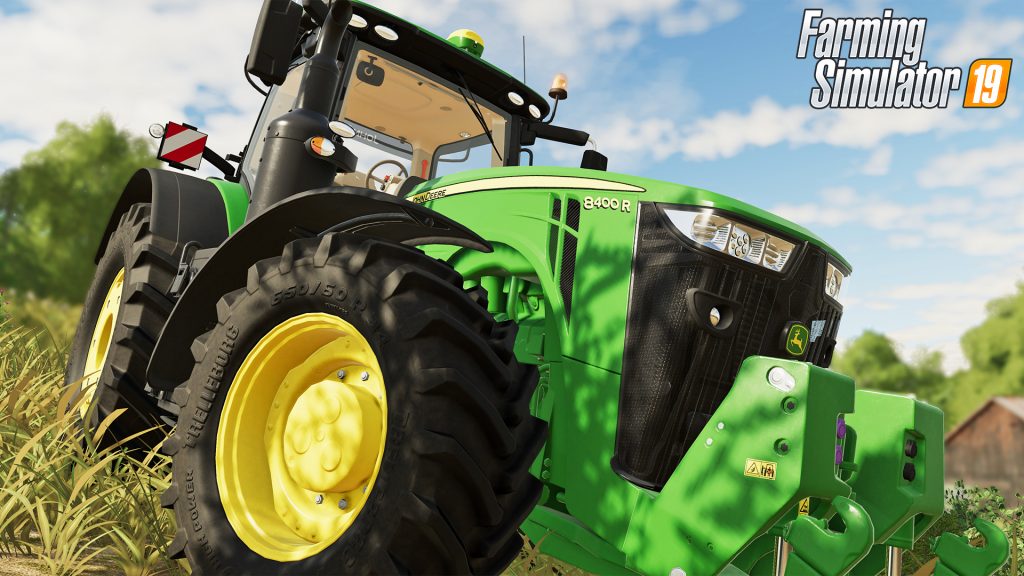 Tractors will now be grouped into classes in the in-game shop by their horsepower to make it easier for players to buy a tractor based on their needs. Machinery will now eventually show signs of wear and tear, and the working speed and strength of tractors will decrease over time. This provides yet another step towards realism, as old equipment that has been heavily used will show its age more prominently, forcing the player to decide whether to hold onto that piece of equipment or sell it to buy something new. Vehicle interiors will also now have cab lighting and dashboard illumination, a feature many players have asked for in order to make the game even more realistic. The last addition revealed for vehicles is that there will now be hoses (such as for hydraulics) connecting various tools/tanks to each other and to the tractors, which adds yet another realistic component to the game. Players need not worry about figuring out what goes where though – the hoses will connect automatically.

Finally, players will now have the option to sleep through the night (i.e., skip it). Malcharek mentioned that this feature may not work in multiplayer, or may even disappear entirely, as it is still in a testing phase.

When asked in the GIANTS Discord server if Farming Simulator 19 will be released around the same time as previous versions (near the end of October), Malcharek responded that he was “Not 100% sure. We will have a release day soon(ish) and let you guys know.” Fans of the series will have to wait a little longer to find out exactly when they’ll be able to get their hands on this new and improved version of the game.

Malcharek has now confirmed the release date for Farming Simulator 19 as November 20, 2018. The date was leaked by Amazon UK, after which it was confirmed by Malcharek on the GIANTS Discord server as being true. When asked why the release date didn’t coincide with the typical end-of-October release of previous versions, he went on to say that “We liked end of October more. Truth be told, that was the initial plan again, but we want things to be as good as possible, so we decided to go for an extra month to polish the game.”

Malcharek also revealed yet another change that will be implemented in the game: gearboxes/transmissions. He indicated that in terms of sound and the feeling of driving tractors, players will see a difference, however since this change is still in development, it is currently unclear whether transmissions will be “automatic” (not requiring any additional input from the player) or if a “manual” option (requiring the player to shift gears) will be offered as well.