Do you love playing classic top down RPGs? In the midst of fighting that gruesome end boss have you ever felt the burning desire to drive a golf ball into their face? Then RPGolf may be just right for you.

Developed by the Osaka-based, 2-man team at ArticNet and published by Tokyo-based company Chorus Worldwide, RPGolf has released on Steam today, after debuting on Android and iOS last year. Starting its development in 2014, RPGolf was finished with the help of an IndieGoGo campaign in 2016. It blends aspects of the beloved Mario Golf with JRPGs of the 3rd and 4th generation console era, all wrapped up in a bright and vibrant pixel art style.

Articnet was founded in 2013 by Riccardo Castelnuovo, and their 2016 IndieGogo Campaign raised $10,252 with 47 backers. Their publisher Chorus aims to bridge the gap between the East and West developers, trying to ease the difficulty of publishing for indie companies to bring their games to the world.

Combining two beloved genres into one experience, RPGolf takes the player into another world, where the people’s passion to play golf has been thwarted by monstrous invaders. Arriving as the unnamed hero, it is your quest to rid the world of these foul creatures and play a perfect game of golf at the same time. RPGolf takes all the classic elements of JRPGs – epic quests, dungeon crawls, fiendish bosses – and blends it with a retro golf game to create something truly unique. 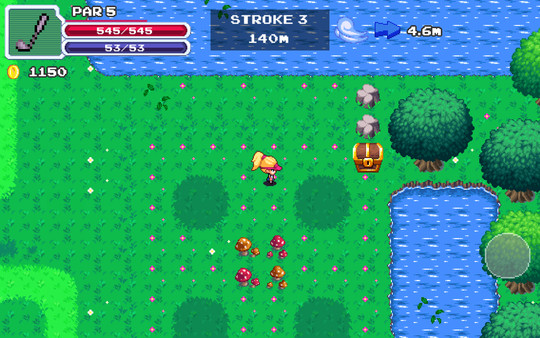 RPGolf seamlessly blends golf and RPG into one addictive game. Battling monsters will level you up, allowing you to hit the ball further and improving gameplay-driven stats and abilities. Discovering new clubs and gloves scattered around the world will improve your golf game, and also give you the edge in combat. By blending 2 game styles together, RPGolf creates a brand-new take on both within a genre space (golf simulators) that rarely sees its horizons broadened.

RPGolf is out now on steam for £2.89 / $3.99 / €2.99 and is available in English, French, German, Italian, Japanese, Korean, Spanish, Simplified Chinese, and Traditional Chinese.

UPDATE 16/05/2018: The original publication of this article incorrectly stated that “Articnet was founded by Riccardo Castelnuovo and Marco Luongo, with their 2016 IndieGogo Campaign raising $10,252 with 47 backers.” It has been updated to reflect the proper founder and date.