Get ready for another dose of fighting game action this weekend! Community Effort Orlando 2018 (CEO) brings its amazing reputation and puts it on the line at the Ocean Center in Daytona Beach Florida. June 29th through June 1st. This year marks its first departure from the city of Orlando, and also features a fighting game event first: a full-scale wrestling show from New Japan Pro Wrestling!

Alex Jebailey founded CEO in 2010, and has been on a monumental climb ever since. Combining his love of pro wrestling and fighting games, CEO’s presentation is one of a kind. Top 8 finals for games take place in a wrestling ring, and will even have its own 8,400 seat arena dedicated to finals this year. Top 8 competitors are even allowed to enter under their own choice of theme music.

Kenny Omega, current International Wrestling Grand Prix Heavy Weight Champion first attended the event in 2015. Kenny, who’s wrestling character previously revolved around his real life love of video games and Japanese culture fit right in amongst the fighting game community. Now, entrusted with running his own show by NJPW top brass, he aims to give back to the community by entertaining them with a show packed with New Japan top stars such as Jushin Thunder Liger, Tetsuya Naito, and IWGP Junior Heavy Weight Champion Hiromu Takahashi.

These aren’t the only stars in attendance of course. We will be seeing top players in a variety of games, like Daigo “The Beast” Umehara, Dogura, SonicFox, HungryBox, Jeondding, Nuki, Chris G, Chris Tatarian, and many, many more.

Friday at 8:00 pm Eastern you can catch CEOxNJPW : When World’s Collide for free on the CEOgaming channel. CEOgaming will also be host to the top 8 finals of Super Smash Bros. Melee, Smash Bros. for Wii U, Guilty Gear Xrd Revelator 2, Killer Instinct, and Super Street Fighter II: Turbo. CEO is a Killer Instinct Ultra Tour stop and will be receiving a $15,000 pot bonus.

You will see all the matches for Street Fighter V: Arcade Edition on CapcomFighters. CEO is a Capcom Pro Tour Premier Event.

See all the high impact team based combat of Dragon Ball FighterZ on the new DBFZ Twitch channel. CEO is the inaugural event of the DBFZ World Tour. The winner of CEO will be granted a Dragon Ball and gain seeding for the world finals.

The Tekken World Tour also continues on its Twitch channel. This is a Master Series event, meaning more points across the board for the top 25 competitors.

Super Smash Bros. Melee and WiiU, doubles and singles will be streamed on polaritygg and VGBootcamp respectively.

Teamsp00ky will be covering pools for Killer Instinct and Guilty Gear Xrd Revelator 2, as well as exhibitions for Fire Pro Wrestling, Soul Calibur VI, and Fighting EX Layer. They will also broadcast the semi-finals for Super Street Fighter II: Turbo, and the top 8 for Street Fighter III: Third Strike and Capcom vs SNK 2.

Villain904 will be handling Marvel vs Capcom: Infinite, The King of Fighters XIV, and Under Night In-Birth EXE: Late[st].

And last but not least, DATAFGC will be broadcasting pools for Super Turbo. 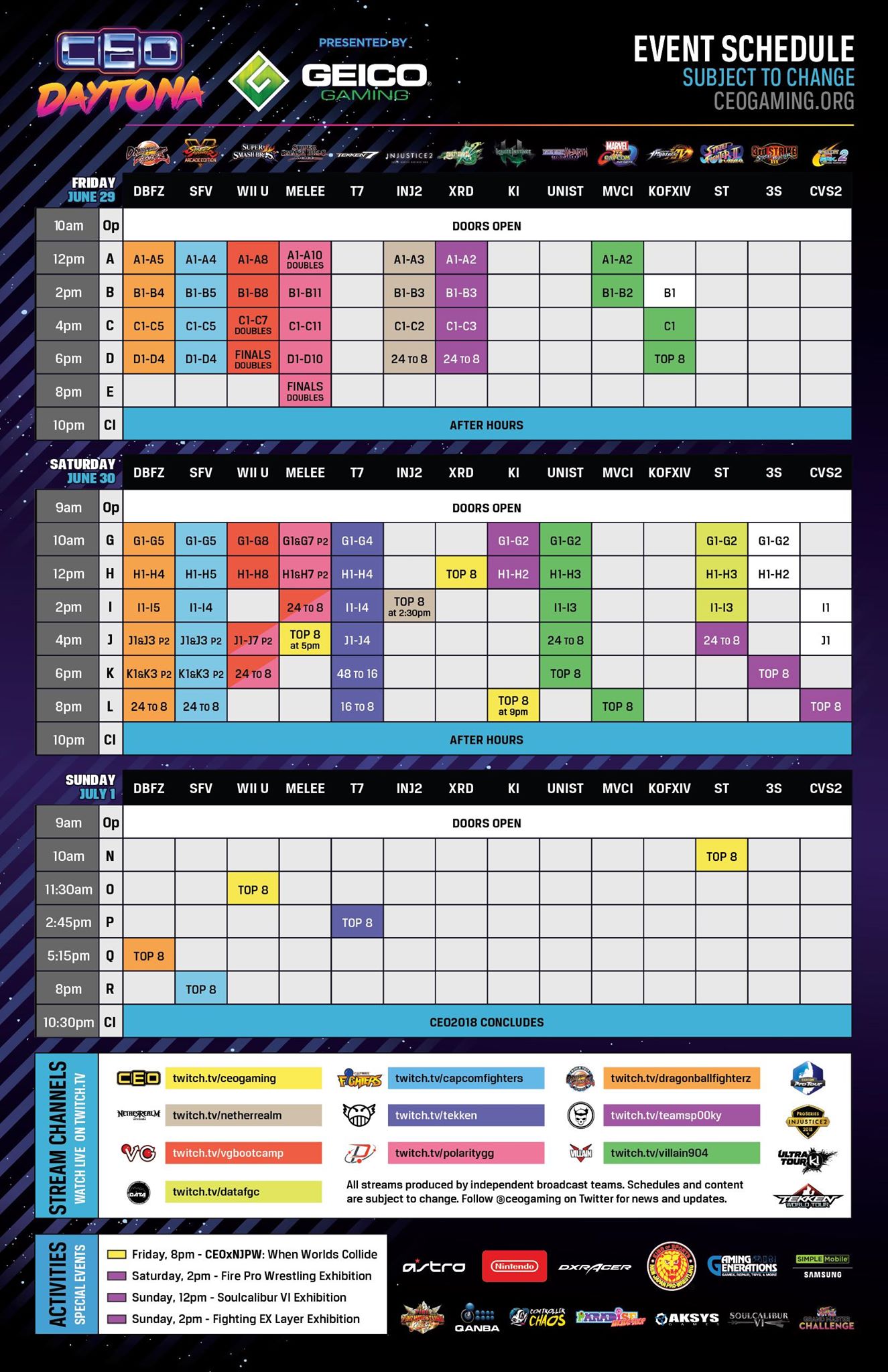