Chris Redfield has had quite the character arc over the past 20 years, and I just blew my own mind with the realization that Resident Evil is now over 20 years old. In the beginning, Chris was the character I knew little about, because I was very bad at the original Resident Evil and he had fewer inventory slots than Jill Valentine. The extra inventory space didn’t help me, but Chris seemed like the character you chose only if you were an elite RE player.

Chris is perhaps the most prominent character in the entire franchise, being playable in Resident Evil, Code Veronica, RE5, RE6, Revelations, and RE7 Biohazard‘s “Not a Hero” DLC (this is not including his appearances in spin offs like Umbrella/Darkside Chronicles and the Mercenaries modes in various games). In the beginning, Chris didn’t stand out any more than any other grizzled cop. He smoked. He had a flat top haircut, the whole nine yards. He was a stereotypical cop in every way you could imagine. 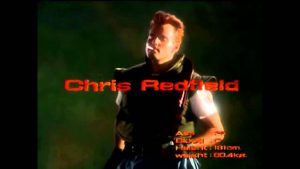 Over time, as we all do, Chris Redfield changed. Such is life. I’m certainly not the same person I was 20 years ago. I don’t listen to Korn anymore. I’m not as socially awkward. I have slightly more gray hair. A lot can happen in that span of time. At some point, though, Chris Redfield drifted over to the dark side…

I spent ten years in the professional wrestling business, and I know a user when I see one. People you see regularly suddenly bulk up at an inhuman rate, and you know something is up. They’re angry. They’re more aggressive. They start criticizing your skinny calves. You know what’s going on. That person is on the juice. They’re on the gas. They’re taking the Arnolds. Gym candy. Pumpers. The ‘roids. PERFORMANCE. ENHANCING. DRUGS!

How do I know this? Let’s look at the evidence. Chris spends so much of his time traveling the world with the BSSA protecting it from men like Albert Wesker, how exactly is he going to find time to hit the gym? Arms don’t get that big from doing a few push-ups. Also, consider that in order to pack on muscle mass one needs to eat an incredible amount of calories, as well as keep a close eye on their fat, carbohydrate, and protein consumption. Not once in any of the Resident Evil games have I ever seen Chris Redfield eat food; he is constantly knocking back herbs though. Lastly, let’s compare his before and after photos. 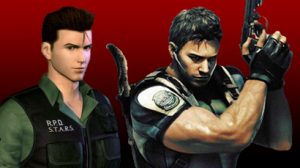 However, I can not condemn Christopher Redfield for his doping. I get it. I, myself, was once tempted to use steroids. I understand the feeling of wanting a more impressive physique and being able to bench press more weight. For me, however, it ultimately wasn’t worth the moral guilt.

Perhaps Chris had those same feelings, but I have no doubt that those feelings quickly went away when he met his greatest adversary. A boulder. But not just any boulder. That boulder. You know the one. The one that was somehow conveniently placed on the edge of a precipice, ready for a good punching. The one that got to that spot without any prior human intervention. The one that would serve as a bridge between Chris and Sheva. That’s the one. You remember that boulder. 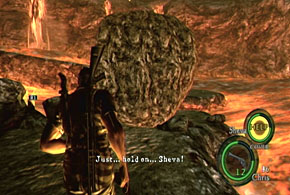 Chris’s performance-enhanced strength proved to be ineffective at budging this boulder that only Jesus could have moved (though if I may critique his form, Chris should have been using more of his leg and core strength). But what that boulder didn’t know was that there was an onslaught of pain coming its way…

Chris noticed that this boulder was going to play dirty, and that’s when he got mad. A few body shots thrown in to weaken his opponent, and then BAM! A right hook and that boulder went down faster thanGlenn Danzig in Tuba City, Arizona.

As someone who has been a fan of the series since the very beginning, I can say that I really like Resident Evil 5. I think it gets unnecessarily written off as a bad game because it followed one of the best games ever made and people didn’t like the increased ratio of action to horror. I will say, though, that it’s only really noticeable when played in co-op. As a single player game, it’s terrible, but with a co-op buddy, it becomes one of the better cooperative experiences of the PS3/Xbox 360 generation.

With Resident Evil 4, the decision was made to change the series from “survival horror” to “survival action.” It worked well with RE4, as it’s one of the highest rated games ever made and received several game of the year awards. For whatever reason, people didn’t lavish the same type of praise on RE5 despite the fact that they’re essentially the same game in many ways. With the increased emphasis on action, we started to see more firepower, more QTE action sequences, and more explosions to the point that Resident Evil 6 may as well have been directed by Michael Bay. 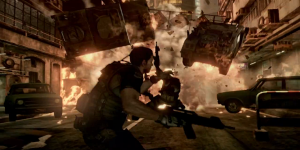 But even in a game where we had already been through several escape sequences, battled giant monsters, and survived a plane crash, this one moment of sheer stupidity was the moment where the series officially lost any and all sense of reality. In a section of RE5 where you’ve just crash landed inside of an active volcano while the Matrix-enhanced version of Albert Wesker punches through a metal canister containing the Uroboros virus and becomes a hulking-armed mutation, the most ridiculous and unbelievable thing Capcom asked me to believe was that Chris Redfield can punch a boulder so hard that it rolls out of the way. 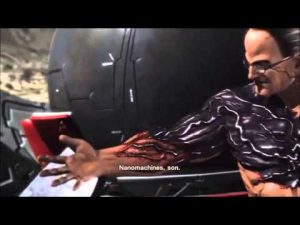