The makers of arcade games in the early 1980s weren’t just looking to make money with sales and quarters. In the wake of Space Invaders and Asteroids came Pac-Man, the first video game character to become a merchandising cash cow, developers had more grandiose dreams. While early 80s gamers were lining up to play it, the various rights holders to Pac-Man were lining their pockets with cash paid by companies willing to put the yellow dot gobbler and his family on practically every type of merchandise you can image. Cereal, bedsheets, clothes, shoes, cigarette lighters, books, plush toys, board games, even vitamins and a Saturday morning cartoon series. Pac-Man was one of the hottest brand licenses one could get there for a while, and with that came a whole other way for video game companies to make bank.

It didn’t take long for them to try, either. The success of Pac-Man caused company after company to start seeking their own franchise characters in the hopes that they’d create a lasting brand that could spawn countless sequels and spark a ton of merchandise revenue. Some companies even pulled it off to a lesser extent, including Nintendo with Donkey Kong and Donkey Kong Junior and Gottlieb with Q*bert, but for every character that caught on there was at least one that did not.

Today, we take a look at some of the early 80s arcade characters that didn’t quite become household names. 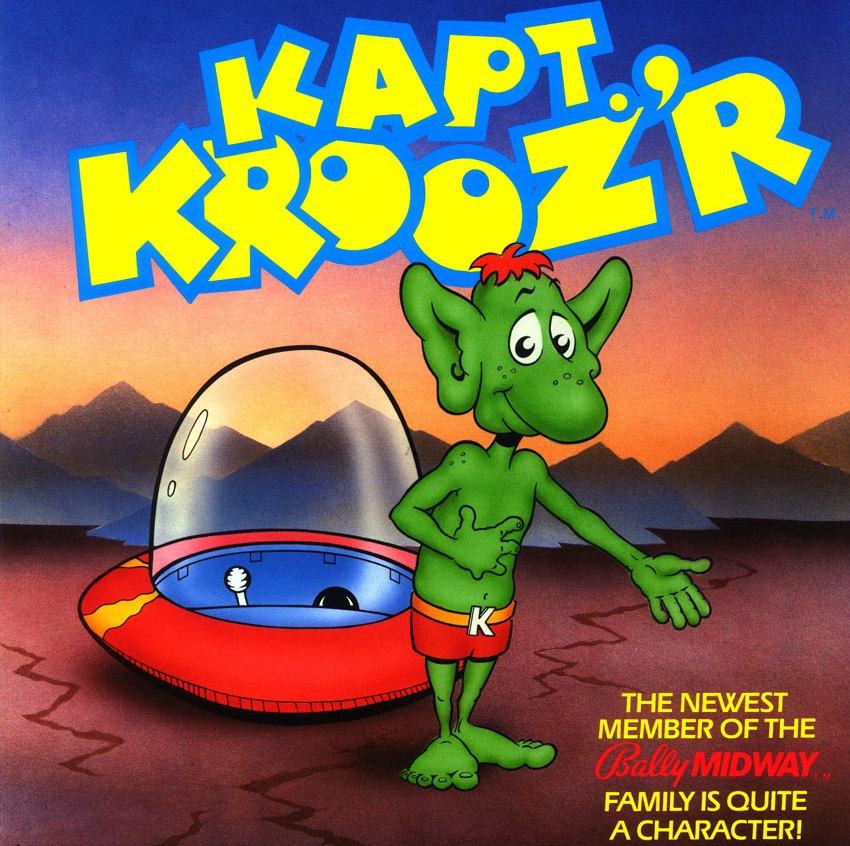 We’ll start with Bally Midway’s blatant attempt at getting in on what the technically started with this green alien guy they thought would make a ton of cash. As the rights holders to the Pac-Man arcade game in North America, Bally Midway’s name typically appeared on all of the aforementioned Pac-Man merchandise. This didn’t sit real well with NAMCO, the company that had created the hit maze game and the writing was on the wall regarding the relationship between the two. In order to continue bringing in merchandise fees, Midway needed to create their own mascot and the awkwardly spelled Kapt. Krooz’r was pushed Roman Reigns-style as “the guy” they were looking for.

Midway’s promotional package for the character even went so far as to mention the licensing success of Pac-Man, suggesting that the success of good ol’ Pac would translate to a great deal of success for their new stud. To help with the push, Kapt. Krooz’r was inserted into two Bally Midway arcade games that were released in short order: Wacko and Kosmic Krooz’r. Both games were pushed fairly heavily via the Starcade TV show and promotional packages.

But it didn’t take. Both games flopped hard in the marketplace and nobody really came knocking on Midway’s door to license the Kapt. for anything more than some puffy stickers that also featured other failed Bally character attempts. As the arcade side of the video game industry crashed and burned in 1983 and 1984, Kapt. Krooz’r’s push stopped and he apparently went back into space forever. 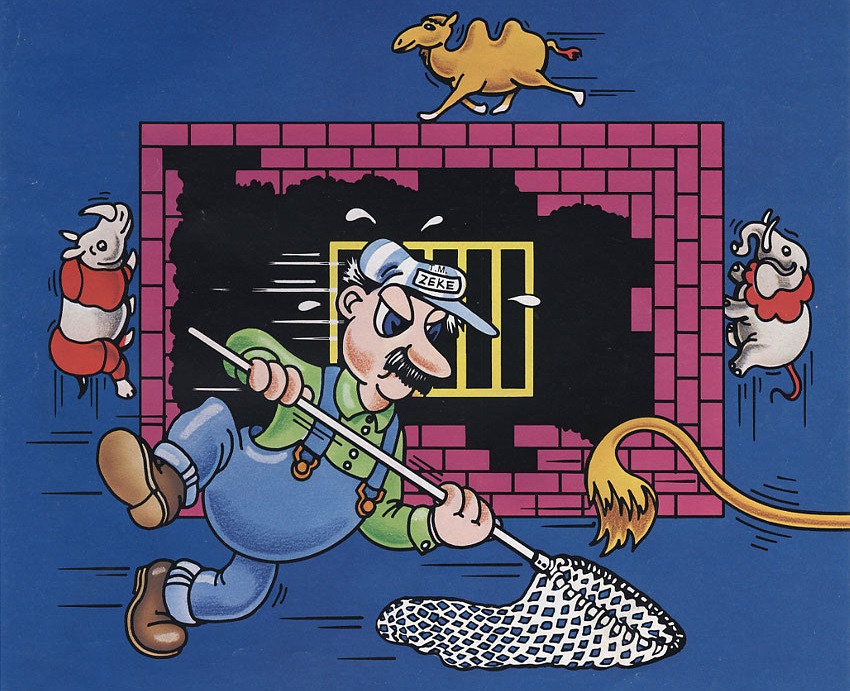 Taito likely was unhappy with how Pac-Man went down. The company could hold its head high as the source of the video game revolution with their 1978 smash Space Invaders, the game that greatly expanded the marketplace for arcade video games worldwide en route to record earnings and sales figures. However, as well as Space Invaders did, it never really generated much in licensing revenue outside of Elliot’s brother in E.T.

Enter Zeke, Taito’s brief attempt at creating a licensed character. Clad in overalls with a hat and mustache, ol’ Zeke looked as if he could be Mario’s father or something. It was clear that their intent was to make him the same kind of hard-working everyman, something it was thought America could identify with at the time. To make sure people didn’t think he was Mario, however, they made sure to put his name on his hat, along with a TM symbol to make sure they knew Zeke was a player.

Zeke debuted in Zoo Keeper, a highly underrated Taito arcade game released in 1982. He also traded in his net for a pick axe in Zeke’s Peak, a version of the famous Ice Cold Beer novelty game aimed for the more family friendly locations out there. Promotional packages featuring Zeke and his girlfriend Zelda (pre-dating Nintendo’s character by several years) were pushed out, containing more trademark symbols than a Trump Hotel, but nothing managed to catch on for Taito’s attempt and the characters fell by the wayside as quickly as they arrived.

It might have been interesting to see how it would have shaken out had Zeke caught on. As Nintendo continued forward, would the similarities between the characters have resulted in a lawsuit down the road? With that, considering that Zeke’s girlfriend was named Zelda, what would Nintendo’s later adventure classic have been called instead?

The character of Mr. Do! is a bit of an oddity in this feature, as there is really no way the character shouldn’t be a household name today.

Introduced by Universal in 1982’s self-titled Mr. Do!, the character started out as a featureless white bean-shaped guy before suddenly being updated into a colorful clown. The reasons for this might have been to avoid a legal issue with Dig Dug, a game with some similar gameplay features that also featured a character digging around in a white suit. Once the game was released in conversion kit form, however, Dig Dug was no longer really an issue to Mr. Do!, as the Mr. Do! game was installed in almost twice as many locations in North America as Dig Dug had been. Mr. Do! was the 7th best earning arcade game during the year of 1983, according to Play Meter Magazine, a note that seems forgotten to time.

With the success of the original game, Universal began to insert Mr. Do! into multiple other games. A game featuring a knight battling unicorns was altered into Mr. Do’s Castle in 1983, as Universal marketed the game as a sequel. A short time later came Mr. Do’s Wild Ride and Do! Run Run, two more Universal conversion kit games aimed at turning the character into a franchise. The character was even placed on Universal slot machines for a short while and home console and home computer ports of the first two arcade titles hit the market worldwide. Universal even planned to release a Mr. Do!-based adventure game on laserdisc.

But for all the arcade earnings success of games featuring the Mr. Do! character, not one kid ever wore a shirt with the logo or colorful clown to school and no cereals or cartoons ever came to be. In fact, despite how well the original game did in American arcades, the character and franchise became somewhat of a ghost by the end of the 1980s, with few seemingly recalling it all and most who did speaking of the franchise as some sort of footnote. There were a few reappearances by Mr. Do! later on, including ports for the Nintendo Game Boy, Super Nintendo and an updated version for the Neo Geo console, but for the most part the games and character faded away into the dirt.

While far from the only video game characters that never will never be mentioned alongside Pac-Man, Mario and the Angry Birds, each of the above early 1980s video game characters were once seemingly pushed for similar success. Had they reached it, the landscape of the industry might be different today.