On April 10th, 2017, we rolled out the scholarlygamers.com website; our intended ‘hub’ for all things #SG. This tied together the various platforms we’d soft-launched in the weeks and months prior, and made for one cohesive place to find the content that our amazing band of rogues have been working on in line with their passions and hobbyist ventures. Below is a handful of interesting facts and statistics about Scholarly Gamers; we wanted to share our successes with you, our fans, as this kind of information isn’t always doled out so plainly by the webmaster and/or administrative staff of sites that compete in this broad (yet highly niched) section of the entertainment industry.

A few comments on Scholarly Gamers’ structure first, however, to ensure that one primary mantra is delivered clearly:

We are looking to be better, and asking ‘why’ will get us there.

Several times in sharing our content to other news-aggregate platforms such as N4G or Reddit, we’ve found comments grumbling something akin to “Typical clickbait garbage looking for ad revenue. Didn’t even open it” – nothing could, in face, be further from the truth. Scholarly Gamers’ website hosting is done on our dollar, and since our early days the giveaways were as well. We believe in building the community, not monetizing it, and this has allowed us to feel comfortable with delving into articles and features that may not pander directly to all mainstream gamers (seriously, how often does one read about genre-revolutionizing changes in the Farm Sim industry or about Patrick Scott Patterson’s video game preservation efforts that have left us calling him our very own Indiana Jones?). We operate with astonishingly low overhead and are blessed with day jobs that allow us to give 100% of what the site needs.

Furthermore, some of us have personally taken to joking with people that they’ll never see a “Seven Reasons Why You Might Like Mario’s Hat” article on Scholarly Gamers, but it’s a very real truth that gets brought up time and time again during our brainstorming sessions behind the scenes. There are already loads of websites that will spoon-feed Top-Ten lists, play-by-play fail compilations, or clickbait-y headlines that herald the announcement of Grand Theft Auto VI, Skyrim 2 [sic] – all while showing you ads about how a Stay At Home Mom Makes $2,708 an Hour With Using One Simple Trick. That latter kind of conduct has no place here – we promise you that it’ll never come about.

All of this is to say that we at Scholarly Gamers take pride in what we’re writing about. Because we’re not strictly chasing the latest trends in the gaming industry (though we do try to break some news from time to time), we view our articles as slightly more ‘evergreen’ than those your typical News and Review sites might publish. Working in that mentality is an amazing luxury to have, as it allows us to give a critical examination of why some games’ aspect(s) have left it a timeless classic or why the best part of a game wasn’t really the game itself.

As noted above, the scholarlygamers.com website has been growing for just over half a year now with a goal of delivering (at least) one post every day that takes a bit of time to think about. Though we hold the ‘scholarly’ moniker, we don’t strictly enforce the academic-technical elements in writing (APA / MLA citations, etc.) though we do expect that the core element of the writing involves asking why in some manner or another. As such, we churn out content a little more slowly than other publications where full-time authors pen two to three articles per day for rapid digestion or summarized recap of some hot news delivery. We’ll get to that quantity volume somewhere down the line, I’m sure, but the website and the contributors that fuel it are working diligently to build us a solid base of content as we move along.

Below are some points of pride for us in the Scholarly Gamers camp; included first are website details, followed shortly after by some metrics held by our streamers. As an owner of the website and Head of IT and Infrastructure, I’m only too proud of the dozens of members we have working across all facets of #SG’s operations and what they’ve been doing to help build the community that Matt and I had in our original visions for it. 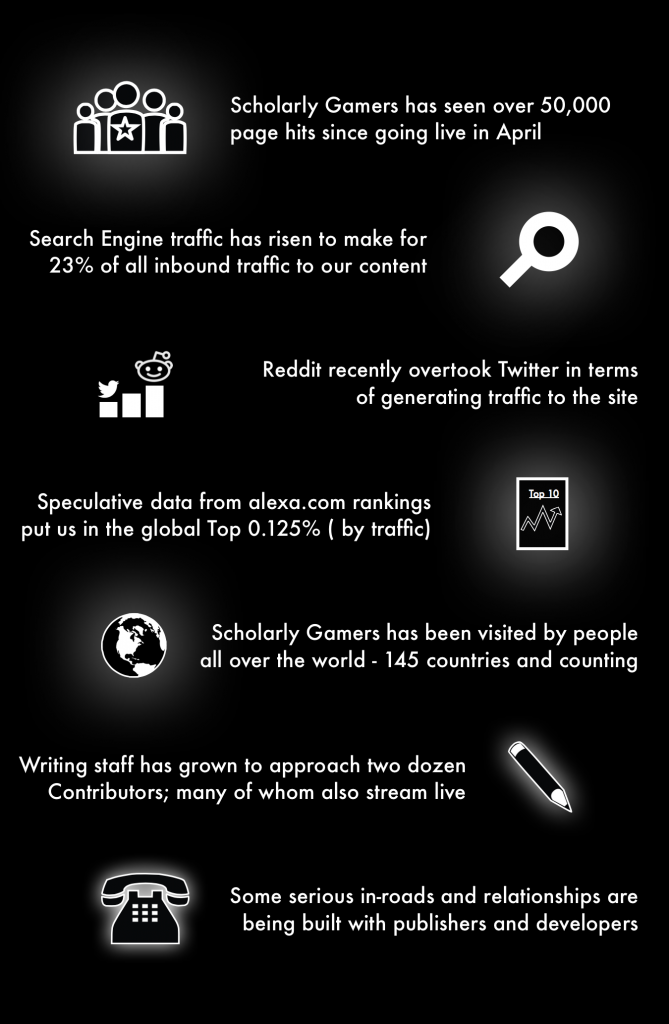 As a footnote to that graphic to explain the last point – our PR guys have been working to build connections with publication houses and PR firms that are looking to promote their content. We have not accepted paid promotions (ie: people asking us to write an unsolicited article for their product in exchange for money or compensation), and have no plans to begin doing as such. The extent of our ‘bartering’ has been receiving digital codes for copies of games that people sign up for to review; once they’ve played it, they write up their earnest feelings about the source material and we publish it to our website. Beyond that, we seek to keep everything above-board so that our ethics cannot be called into question.

Articles and News on the website make up only one pillar of what Scholarly Gamers is up to. We also have a dozens-strong Stream Team that broadcasts often and has been tirelessly building their streams using each other as resources for technical advice, artistic direction, and social referrals. It’s in that last part that I see the most promise within the streaming community; ie: at the end of on stream, the streamer often ‘raids’ another team member who’s online and well-suited to the audience they’ve gathered. Keeping the momentum going is driving a lot of viewership on Scholarly Gamers content, follows to the various streamers’ channels, and even subscriptions.

On that note (subscriptions), we’re proud to say that every one of our streamers that have been vying for Twitch Affiliate status has now been selected for and registered into the group. This means that our streamers can work towards earning themselves a little bit of income, qualify for exclusive promotional materials, and generally be proud that they’ve stepped up their game to the next level and carved out a little bit more of the market for themselves. And, with all of them streaming to our Twitch Community Page alongside each other, the team is built up more and more. 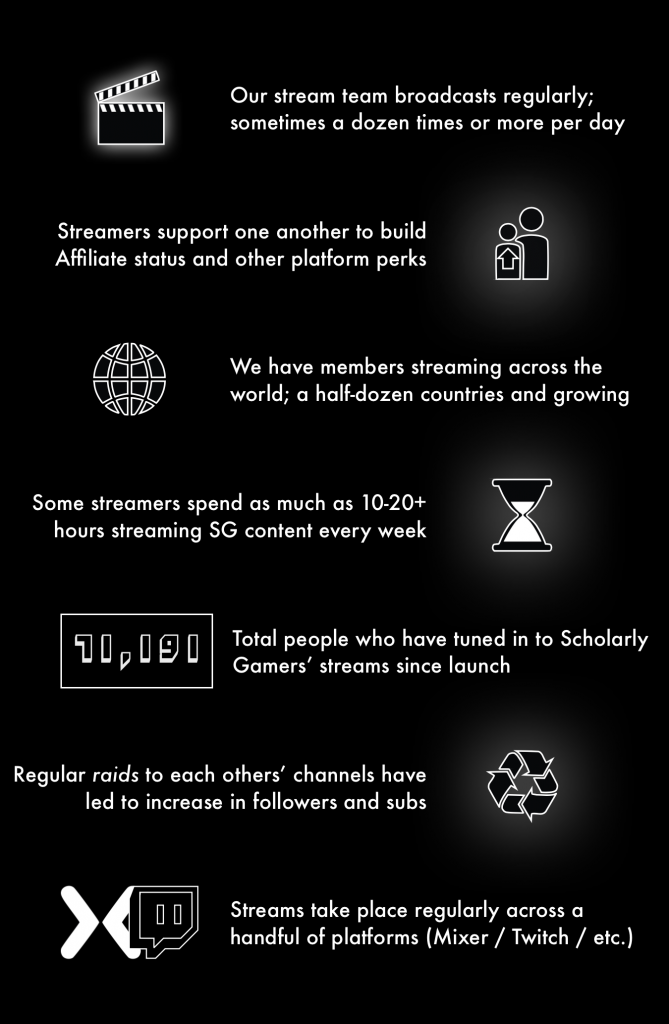 Where Scholarly Gamers is Headed

From the onset, the management of Scholarly Gamers has held three primary pillars in mind for what kind of media we could / should offer. Articles, Streams, and third – Video. More recently, we’ve started hosting regular videos on the website; series like #JungleDrums, Armchair Gaming, and Streaming Fundamentals have been running for several weeks or months, and have become a staple in our weekly schedule. With recently-instated leadership to govern the output of Video content and lend a hand with content delivery, we’ve seen remarkable growth in generated videos that will continue solidifying this third pillar of our operations.

Moving beyond the idea of Video content as if it were the final delimiting facet of what the Scholarly Gamers community is about, we’ve recently taken steps to expand our reach but a little bit further to create our own subreddit as another platform for discussion to be held, although we haven’t done a lick of advertising for it yet (and won’t push it heavily until we feel that it’s just right – it is, after all, a work in progress). We hope in time that it becomes a budding landing zone for those interested in our written works and published videos, but Reddit is by and far one of the most independent platforms in terms of generating structured growth. If you enjoy Scholarly Gamers’ content and would like to see it come up a little more in your day-to-day, please do feel encouraged to subscribe to r/Scholarlygamers and we’ll be sure to continue posting our new stuff there as it becomes available!

On a more personal note that breaks from this post’s writing in third person view, I would like to directly thank each and every member of the Scholarly Gamers community. Whether your role in it has been contributing articles and features, streaming and repping the #ScholarlyGamers hashtag everywhere, building video content for the youtube channel and site publication, following along on our various social channels, or even giving us a word of encouragement out and about in the real world – you are exactly why I do this. I know that I can speak for Matt as well in voicing our appreciation, as we’ve put thousands of hours between us into setting up the website, staffing, logistics, scheduling, promotions, outreach, infrastructure, and more. With over three dozen staff supporting us (and us in turn supporting them), we’re building a little family of likeminded individuals, and there’s no ‘hobby’ project that I’ve ever enjoyed more.

One Year of Scholarly Gamers!