Reboots can be a tricky business. In video games, most of our favorite heroes have been subject to reboots that failed to live up to their predecessors — Joanna Dark fell from grace in Perfect Dark Zero for instance, and fighting games are notorious for failing reboots. But sometimes a reboot can return a series to grace — such was the case with Shadowrun Returns by Harebrained Schemes.

Pen and paper roleplaying games have long been a part of gaming culture, ever since the first Dungeons & Dragons book hit shelves in 1974. With the advent of video gaming, the electronic-play cousin has tried to transmit the feel of tabletop roleplaying’s communal storytelling, crucial to low-tech RPGs, but it has mostly failed. Shadowrun Returns takes the joy of the isometric roleplaying game, which was made popular more than two decades ago for pen and paper to video game adaptations, and drives it closer to its roots.

In simple terms, Shadowrun is a cyperpunk fantasy roleplaying game. It first appeared as a pen and paper game through a rulebook published in 1989. It’s no coincidence that this came only a few years after William Gibson’s Neuromancer hit shelves in 1984, which is considered one of the most influential cyberpunk works — the Canadian is also accredited as coining the term “cyberspace” in a slightly earlier work. Due to the nearly three decades that have passed since the game’s inception, much of its timeline is now alternate history, but at the same time it seems to eerily mirror current world problems.

It is a D20 game, played similarly to D&D. A dungeon master runs a campaign and players socially navigate the story, saying what their characters would do and rolling dice to determine the outcome of actions — and thus, the DM organically weaves the story around the successes and failures of actions. Like most D20 pen and paper games, campaigns are generally derived from a book which details how the story will go. However, some DMs choose to modify these stories or create their own. Nevertheless, no two playthroughs will be the same, as the story changes based on how everyone interacts with each other.

The Shadowrun universe takes place in the latter half of this century, but the universe’s history has diverged since the 1980s, with the world shifting towards extreme corporatization (as in, countries like Austria dissolved their government and let the corporations take over). There are even some shifts to places like Canada, where Quebec became a sovereign nation in 2010 (which echoes the 1980 referendum that occurred not too long before the game debuted — also, in the real world, a 1995 referendum was 1 percent away from succeeding in favour of Québécois separation). The radical, fantasy changes take place a bit later. In 2011, babies start being born with elven and dwarfish traits. That same year, magic reappeared in the world. Along with magic came dragons and — obviously — destruction, because that is just how dragons do.

On April 30, 2021, “goblinization” racked through the world, turning random humans into Orks and Trolls. Places like Quebec extended rights to goblinized francophones, but, as expected, racism trumped throughout most of the world. Places like America, where Native American reserves had been appropriated by corporations, segregated goblinized citizens into the reeducation camps they had previously used to hold those Native Americans. Japan decided to simply deport metahumans instead.

This is the Shadowrun universe: a future, cyberpunk Earth with magic, dragons, mythical races, and a whole ton of racism and corporate elitism. 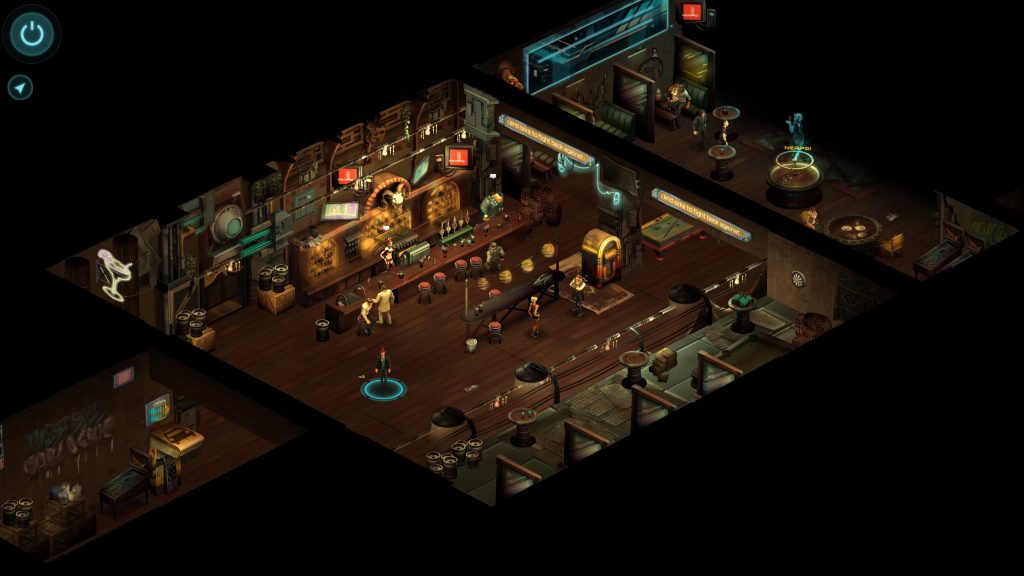 Adapting Shadowrun to the controller

The universe appeared in virtual form more than two decades before Shadowrun Returns. The first Shadowrun video game adaptation was for the Super Nintendo Entertainment System in 1993. In it, you find yourself waking up in a morgue, as you were presumed dead. Like most games at the time, you’re given no indication of what exactly you’re supposed to do, and you find yourself randomly clicking on objects and talking to people until you hopefully end up where you’re supposed to be without dying. Unlike most other Shadowrun games, you are unable to select a class, and combat is performed by clicking a button to activate your firearms, moving a cursor with the D-pad to hover over an enemy, and firing until one of you drops dead. That being said, it was pretty acclaimed at the time and still hits the nostalgia feels with some folks. The music is pretty ’90s too.

The second game dropped on the Sega Genesis the following year. The graphics were much better and this time you got to choose which class you wanted to play: samurai (gun and sword fighter), decker (hacker), or shaman (magic user, obviously). And generally, it just played better and felt closer to the tabletop to video game RPGs you come to expect from titles like Baldur’s Gate. Again, this was widely popular and is still held to critical acclaim. Two years later, an anime/manga inspired version of the game came out in Japan for the Sega CD attachment to the Sega Genesis. However, it was actually the last game ever to come out for the system. This is known in video game history as the year Sega Genesis got dropped.

The next game was produced by Microsoft for Windows Vista and Xbox 360. The developer, FASA Interactive, was shut down in 2007, the same year the game released. The game was a first-person, Counter-Strike-like, multiplayer-only game. It was initially supposed to have a singleplayer campaign, but that was cut. It did allow Xbox 360 players to play with people on PC — however, only 12,000 copies were bought by those wielding mice and keyboards. Surprising no one, the lackluster gameplay in the title and wide separation from its RPG roots meant the game was a failure by far.

In 2013, Harebrained Schemes stepped into the fray, publishing Shadowrun Returns through a Kickstarter campaign. It was a massive success. They went on to release Shadowrun: Dragonfall and Shadowrun: Hong Kong in the following two years, both tweaking their play systems slightly and greatly improving on their storytelling. As a side note, 2015 saw Shadowrun Chronicles: Boston Lockdown hit Steam shelves, developed by Cliffhanger Productions. This was supposed to be an online adventure into the series, but was quite the failure. 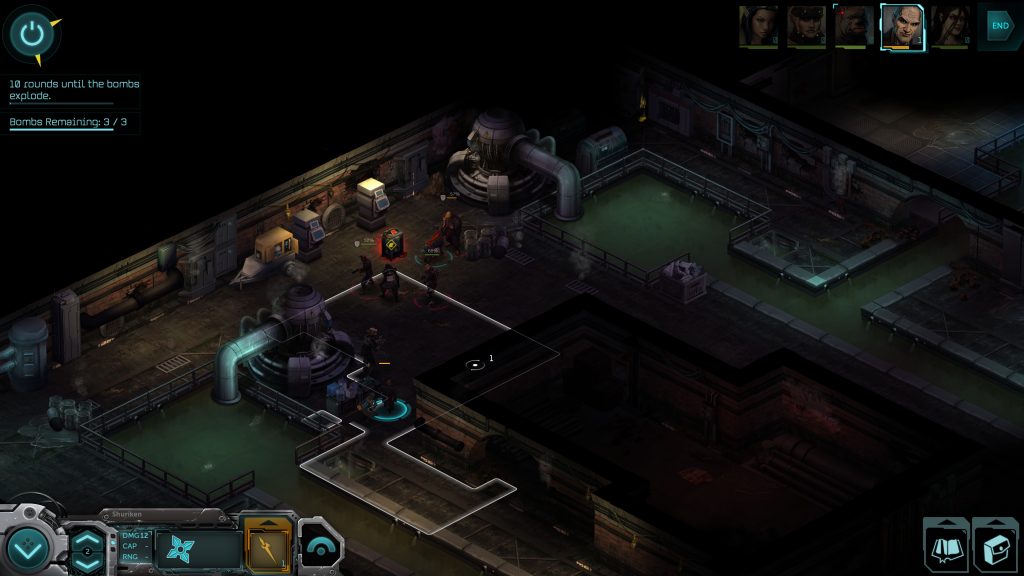 Shadowrun Returns flows as if the developers took a simplified version of RPG elements from games like Baldur’s Gate or Neverwinter Nights and mixed them with the turn-based, cover-heavy combat of XCOM. It functions much like its pen and paper form, where you’d take turns to move meeples on a grid-based map and take a certain amount of actions within a turn. Character creation allows you to choose your class, skills, and race. The game mechanics are close to how the original non-tech version of the game works, but is variant in a way that makes it easy to play in a digital format, which is great because different mediums play extremely differently. Just like tweaks of style and story are made when translating books into movies, tweaks have to exist between non-virtual games and virtual games to make them work well within their respective medium. Regardless, because the mechanics work so well and each of the stories are quite fun to play through, Shadowrun was able to successfully reboot itself from the sea of failure Microsoft had drenched it in.

However, there is one realm where Shadowrun Returns fails to emulate the pen and paper RPG, but also performs better than just about any other video game attempting the same form of emulation. Simply put, a video game can never fully fill the roll of a Dungeon Master. Unlike other forms of media, a video game player affects what gets transmitted from the media to them as they play it. Pen and paper RPGs take this a bit further, as the DM also chooses how to organically create a story as the players affect what’s in it. This is akin to having an AI which would rewrite parts of a game based on what players do, which theoretically is possible, but is not probable anytime soon.

However, Shadowrun Returns semi-remedies this through the inclusion of the Steam Workshop. The workshop allows anyone to create their own adventures for others to play. While this does not fill the role of an organically functioning DM, it still allows fans to create their own stories that use a publisher’s source material to create new adventures, much like how a DM would when telling their version of a campaign. In fact, the Shadowrun community was so active with this that, within a month of launch, an in-the-works reboot of the original SNES game’s story appeared on the workshop.

The next step in bringing video games closer to pen and paper would be to create an actual artificial intelligence that would choose to forsake world domination and instead DM to write code/story organically for games as players play through them. While Shadowrun Returns does not manage to coax our AI overlords into DMing a fantastic story for us in true pen and paper RPG fashion, it has emulated the low-tech RPG closer than most video game adaptations and been a faithful reboot in a world where the word “reboot” often sends shivers down our spines.