I’ve thought long and hard about the Metroid series in recent years. I wouldn’t consider myself a super fan; in fact, I usually prefer games that are similar to Metroid over the actual Metroid franchise. The Nintendo rep that services my place of business stopped in shortly after the Switch had launched, and Nintendo had tasked their reps with getting the opinions of the employees of the stores they visit. Nintendo wanted to know what kinds of games we wanted to see, and without hesitation, I told my rep, Lynn (who is awesome and deserves a raise, Nintendo), that I wanted a 2D Metroid game. I wanted to see Samus return to the spotlight. I wanted to see her back in her element.

We can go ahead and forget that Metroid Prime: Federation Force was a thing that happened. For the sake of this article, Metroid: Other M was the last Metroid game, which was back in 2010. Seven years have passed since Other M (which isn’t as bad as the internet would lead you to believe), and after its mediocre reception, Nintendo shut the series down for a while. Metroid may not be a flagship title for Nintendo the same way Mario or The Legend of Zelda are, but at one point in time, Samus was just as important to the success of Nintendo as Mario or Link.

Nintendo has a reputation for going after fan-created games using their IPs, and the fan response has always been “Well, you’re not doing anything with them.” After Nintendo announced Metroid: Samus Returns at E3, it shed some light on why the company came down so hard on the fan-made Metroid 2 remake, AM2R. 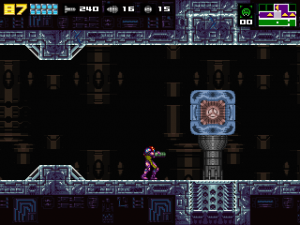 AM2R (Another Metroid 2 Remake) was receiving a lot of positive press before it was shut down, and that could potentially lead to this problem: what if a fan-created game is better than one produced by Nintendo themselves? Let me first clarify that I have no doubt that Samus Returns is going to be a quality title. As a matter of fact, I’ve already got my special edition pre-ordered (even though I live in the United States and will get the inferior special edition to Europe’s amazing one). When put side-by-side, I prefer the visual style of AM2R. It has more of the retro aesthetic that hearkens back to Super Metroid/Fusion, eliciting a squeal of giddiness from the child inside of me. Samus Returns still looks good, but perhaps a little too polished. When I think of Metroid, I immediately think of the aforementioned Super Metroid and Metroid Fusion. The 2D Metroid series, to me, is synonymous with that art style.

Metroid has always thrived on the concept of show and don’t tell. Its minimalist approach to storytelling is perhaps its greatest strength. In Super Metroid, you’re given a paragraph of text at the beginning, and that’s it. You receive even less exposition in the original. When you’re first shown how to wall jump in Super Metroid, you’re never given a tutorial. You see some small creatures doing it, and then it’s up to you to figure it out. You can’t retreat, so you have to learn this ability, and by the time you are able to reach the next area, you’ve practically mastered wall jumping. From the short gameplay demo I’ve seen, MercurySteam seems to be going for a more cinematic approach, not necessarily with long cutscenes or dialogue, but with mini-cinematics and small tutorials every few rooms to place emphasis on something. It’s a small nitpick, but I’m hoping that doesn’t lead to greater instances of this later in the game. 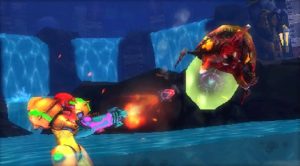 MercurySteam themselves are perhaps what worry me most. The company doesn’t have a great track record, and when I heard they were the ones Nintendo chose for this project, I was slightly perturbed, though they do have some experience working on games similar to what they’re going for with Samus Returns. MercurySteam is the team behind such classics as Jericho and the Castlevania: Lords of Shadow series. I will go on record and say that I absolutely loved the first Lords of Shadow game. It didn’t really feel like a Castlevania game and is a separate timeline from the original, but it was still a solid game. I can’t say the same for its sequels, however.

Castlevania: Lords of Shadow – Mirror of Fate was originally released on the 3DS before being ported to Xbox Live and PlayStation Network. I thought I was finally getting a new 2D Castlevania in the same vein as Symphony of the Night, what else should I expect from a game with Alucard in it? What I got instead was a small world with tedious combat that never got past the mark of mediocre outside of a few neat areas. It’s one of the most average games I’ve ever played.

My hope is that since Samus Returns is a remake and not a new game being built from the ground up that MercurySteam can pull out a winner. It’s very rare for Nintendo to put their name on something that’s not quality, and since 2D Metroid has been dormant since 2004’s Metroid: Zero Mission, I’m really hoping they knock this one out of the park. I hope it sells well and shows Nintendo that we’re still willing to buy games for the series that they may not put as much stock in now. 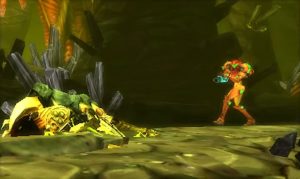 But as we all know, if a game sells poorly, the publisher has less incentive to produce a sequel. The good news is that Nintendo is on a roll right now with the Switch, and the excitement over the recently announced SNES Classic will hopefully garner a renewal of fervor for the Metroid brand with the inclusion of Super Metroid, heralded by many as one of the best games ever.

It took Nintendo 13 years to return to 2D Metroid, and hopefully Samus Returns revitalizes the series and convinces Nintendo not to make us wait 13 more for another.