With many recently released games to look forward to playing, including Mass Effect Andromeda, Horizon Zero Dawn, The Legend of Zelda: Breath of the Wild, Ghost Recon: Wildlands, and For Honor, it is important to remember to give your body a health break during extended gaming sessions.

The prolonged awkward sitting postures you might find yourself in during a gaming session can contribute to serious neck, shoulder, and back pain. It is really easy to lose track of time when you are absorbed in your favorite game, especially if there is a heavy immersion or competitive factor in what you are playing. One hour passes by, then another, and suddenly you realize your neck is unconsciously fully extended toward the screen to maximize your perception. You do not need me to tell you that there are long term consequences to the rest of your body when you have stayed in ‘chicken-neck’ stance for too long. So how about you do your body a favor and take a breather away from your game. Who knows, sometimes giving yourself a time out can save your monitor’s life.

Why is stretching important?

It should be no surprise that Straker, O’Sullivan, Smith & Perry (2009) found that neck and shoulder pain is widely known as a common problem for adolescents as well as young adults. Most importantly in this modern society that we live in, many of us that fall into this category have this problem exacerbated because we spend a large amount of time sitting, whether for work or relaxation.

According to O’Sullivan et al., (2012), sitting is one of the most aggravating factors in low back pain. It is documented as both a common and costly musculoskeletal disorder, and is now widely acknowledged as a complex disorder with numerous contributing influences (physical, biological, psychosocial, genetic, and environmental). Although the best sitting posture remains unclear, it has been widely agreed upon that slumped sitting postures (such as the aforementioned forward head posture) are problematic for the lower back. Unsurprisingly enough, O’Sullivan et al. also found a correlation between bad posture and increased levels of fatigue and discomfort.

Furthermore, a research study conducted by Jameson, Trevena, and Swain (2011) studied the effects of electronic gaming as a pain distraction. Their participants were required to submerge their hand into cold water (2°C) for as long as they could endure in three separate randomly assigned phases. These phases include doing the task with either no distraction, with an active (electronic gaming system) or a passive (television) distraction. The results of Jameson, Trevena, and Swain’s study found that participants in both the active and passive distraction groups reported having a higher pain tolerance and less pain in comparison to the group with no distractions. When they had distractions, participants reported more enjoyment, less anxiety, and a greater reduction in pain.

The more enjoyable the activity, the less attention you are giving to anything else. This makes it much easier to form a possibly dangerous habit, which you may be enforcing everytime you become really absorbed in games.

How does this relate to gaming?

You might be too distracted to realize the damage before it is too late.

The posture you have when you are playing video games could be a long-term risk factor to pains associated with your neck, shoulders, and back. It is not only monitor or television screens you need to worry about because ‘text neck’ is also on the rise for young adults. According to Dr. Dean Fishman of the Text Neck Institute, text neck is a global epidemic that can be classified as a world-wide health concern which affects billions of people around the world. Text neck was defined as the repeated stress injury to the body caused by excessive texting and overuse of all handheld electronic devices. The most common pains associated with text neck include those felt in the neck, shoulder, back, arm, fingers, hands, wrists, and elbows. It is also possible to experience headaches, numbness, and tingling of the upper extremities from prolonged use of handheld devices.

Dr. Fishman stresses the seriousness of the consequences of text neck if left untreated because it could result in permanent damage to your body, including causing a flattened spinal curve, early arthritis, as well as possible muscle and nerve damage. These long term consequences do not take an expert to tell you that they are going to make your daily well-being unpleasant.

I interviewed registered massage therapist (RMT) Mikey Wells from Peterborough, Ontario to help stress the importance of stretching to gamers. 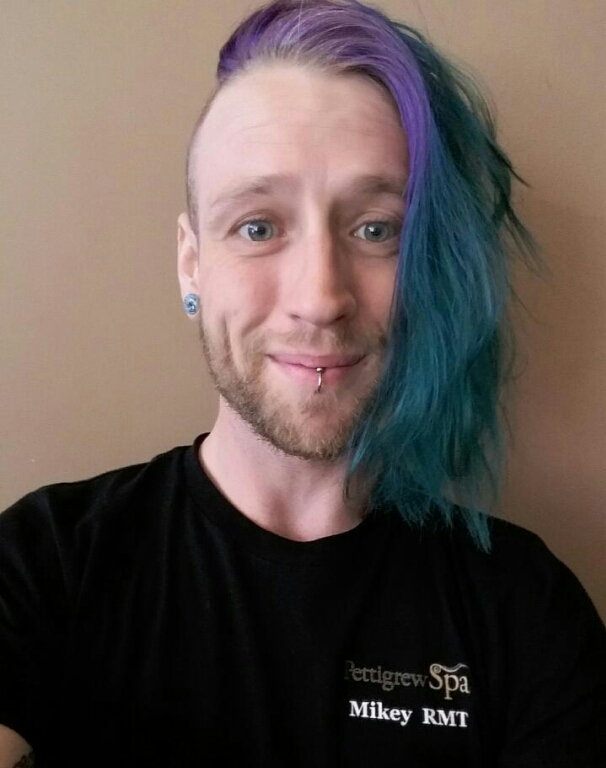 K: In your opinion as a registered massage therapist, how important is stretching during or after long hours of gaming (computer or console)?

M: As a registered massage therapist (RMT) I believe that it is extremely important to be stretching before, during and after long periods of gaming; both computer and console.

K: Which areas tend to need the most attention for someone who spends a lot of time at an office desk or gaming positions?

M: From personal experience I’ve found that areas with the most issues tend to be the lower back and hips from sustained sitting. The upper back, neck and shoulders can become strained from long periods of typing, using console controllers, or a mouse and keyboard. Also, the muscles of the forearms may have issues from using the same devices for extended periods of time. I call it the ‘Gamer Posture’ at work with my clients.

K: What kind of consequences can there be for long-term gamers who neglect stretching?

M: Essentially as I like to tell people at work: your muscles are not going to be happy campers. All areas may have muscle tension issues, which over time could cause a decrease in range of motion and flexibility. If this happens in the lower back and hips it may lead to tension so great that muscles may push on the Sciatic Nerve, which isn’t a pleasant experience. I learned this from personal experience due to increased tension in my own hips from a past of skateboarding and not stretching before or after. The only thing more painful is the treatment. So trust me: do your stretches!

For the upper back, neck and shoulders, sustaining a hunched position may cause tension or trigger points (knots) which if untreated may lead to tension headaches, limited flexibility and decreased range of motion. The forearms may also have long term issues caused by repetitive strain on the muscles used to push the various buttons and joysticks on controllers, keyboards, and mice. The player may experience anything from aches and pains from over use, to possibly even something as extreme as Carpal Tunnel, just as one example.

It is also important to stress that I am not a doctor, but a registered massage therapist, and that none of these are cure-all prescriptions. I am just sharing what I’ve learned through personal experience and my practice, because not all people are the same and therefore not all gamers will be either. The most important thing is to stretch and be mindful of how you are feeling.

K: Do you recommend any exercises of your own that would be beneficial for gamers?

M: Of course!I know that I personally try to stretch my hips, neck and shoulders everyday, especially when Diablo 3 is in the Xbox One. I suggest that if you’re interested in stretching these muscles, Google or YouTube these terms: lumbar and glute stretches, upper traps, sub-occipital stretches, forearm stretches, pec stretches. Then, attempt to do these at least 3 times a day even if you don’t plan to game.

If you do have a long period of gaming planned, take a break after an hour or so and stretch. When performing your stretches take the stretch slowly to as far as you can go and hold it; if you’re in pain you’ve gone too far. Hold this position for 30 seconds or until you feel the muscle go slightly further than when you are sustaining the stretch.

Almost more important or just as important as stretching is maintaining the muscle. Developing the muscle in these areas will also help the stave off long term effects of gaming or office work.

Here is an example: as a massage therapist I get very sore forearms and I found that stretching wasn’t enough to hold off the aches and pains. I asked a fellow therapist and they said that I needed to strengthen my forearms to keep away the aches and pains, and it has been super effective.

I find the same issue with people who work office jobs; they may have sore lower backs and no matter how much they stretch they can’t find relief. This may be due to weakened muscles in the hips and abdominal areas, and more developed muscles in these areas may take tension off the lower back region and reduce or relieve pain.

K: As a gamer yourself, can you share your personal favorite game and why?

M: I am a total gamer, I spent much of university playing games with Matt Ferguson. That’s a hard question though; games are like good books so it’s nice to have a variety. If I had to pick one I’d have to say Titanfall 2. I love giant robots, I love the speed, and I love how it’s kind of the extreme sports game of shooters. You get to be so creative with your kills and movement in general. As an old adrenaline junkie and extreme sports enthusiast, it hits close to home with me.

So there you have it! Make sure to stretch and be mindful of how you are feeling! While we may not always be able to get massages from our friendly neighborhood RMT or even regular appointments to see the chiropractor, there are remedies you can do at home or at the office to help with neck, shoulder and back pain. A great resource for neck, shoulder and back exercises can be found on AiraWear, which provides simple yet effective exercises that may help save your health packs for your next big boss fight!